From Infogalactic: the planetary knowledge core
Jump to: navigation, search
This article is about the book on comparative religions. For the musical group, see Golden Bough (band). For the tale by Virgil, see The Golden Bough (mythology).

The Golden Bough: A Study in Comparative Religion (retitled The Golden Bough: A Study in Magic and Religion in its second edition) is a wide-ranging, comparative study of mythology and religion, written by the Scottish anthropologist Sir James George Frazer. The Golden Bough was first published in two volumes in 1890; in three volumes in 1900; and in twelve volumes in the third edition, published 1906–15. It has also been published in several different one-volume abridgments. The work was aimed at a wide literate audience raised on tales as told in such publications as Thomas Bulfinch's The Age of Fable, or Stories of Gods and Heroes (1855). The influence of The Golden Bough on contemporary European literature and thought was substantial.[1] 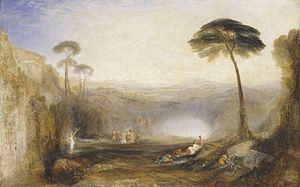 J. M. W. Turner's painting of the Golden Bough incident in the Aeneid 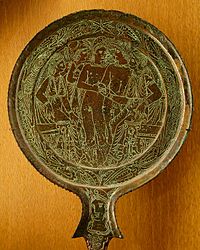 The Judgement of Paris—an Etruscan bronze-handled mirror of the fourth or third century BC that relates the often misunderstood myth as interpreted by Frazer, showing the three goddesses giving their apple or pomegranate to the new king, who must kill the old king - Campana Collection, Greek, Etruscan and Roman Antiquities, Sully

Frazer attempted to define the shared elements of religious belief and scientific thought, discussing fertility rites, human sacrifice, the dying god, the scapegoat, and many other symbols and practices whose influences had extended into 20th-century culture.[2] His thesis is that old religions were fertility cults that revolved around the worship and periodic sacrifice of a sacred king. Frazer proposed that mankind progresses from magic through religious belief to scientific thought.[2]

Frazer's thesis was developed in relation to J. M. W. Turner's painting of The Golden Bough, a sacred grove where a certain tree grew day and night. It was a transfigured landscape in a dream-like vision of the woodland lake of Nemi, "Diana's Mirror", where religious ceremonies and the "fulfillment of vows" of priests and kings were held.[3]

The king was the incarnation of a dying and reviving god, a solar deity who underwent a mystic marriage to a goddess of the Earth. He died at the harvest and was reincarnated in the spring. Frazer claims that this legend of rebirth is central to almost all of the world's mythologies.

Frazer based his thesis on the pre-Roman priest-king at the fane of Nemi, who was ritually murdered by his successor:

When I first put pen to paper to write The Golden Bough I had no conception of the magnitude of the voyage on which I was embarking; I thought only to explain a single rule of an ancient Italian priesthood. (Aftermath, p. vi)

The book's title was taken from an incident in the Aeneid, illustrated by Turner, in which Aeneas and the Sibyl present the golden bough to the gatekeeper of Hades to gain admission.

Frazer wrote in a preface to the third edition of The Golden Bough that while he had never studied Georg Wilhelm Friedrich Hegel, his friend James Ward, and the philosopher J. M. E. McTaggart, had both suggested to him that Hegel had anticipated his view of "the nature and historical relations of magic and religion". Frazer saw the resemblance as being that "we both hold that in the mental evolution of humanity an age of magic preceded an age of religion, and that the characteristic difference between magic and religion is that, whereas magic aims at controlling nature directly, religion aims at controlling it indirectly through the mediation of a powerful supernatural being or beings to whom man appeals for help and protection." Frazer included an extract from Hegel's Lectures on the Philosophy of Religion (1832).[4]

The Golden Bough scandalized the British public when first published, as it included the Christian story of Jesus and the Resurrection in its comparative study. Critics thought this treatment invited an agnostic reading of the Lamb of God as a relic of a pagan religion. For the third edition, Frazer placed his analysis of the Crucifixion in a speculative appendix; the discussion of Christianity was excluded from the single-volume abridged edition.[5][6]

Frazer himself accepted that his theories were speculative and that the associations he made were circumstantial and usually based only on resemblance.[7] He wrote: "Books like mine, merely speculation, will be superseded sooner or later (the sooner the better for the sake of truth) by better induction based on fuller knowledge."[8] In 1922, at the inauguration of the Frazer Lectureship in Anthropology, he said: "It is my earnest wish that the lectureship should be used solely for the disinterested pursuit of truth, and not for the dissemination and propagation of any theories or opinions of mine."[9] Godfrey Lienhardt notes that even during Frazer's lifetime, social anthropologists "had for the most part distanced themselves from his theories and opinions", and that the lasting influence of The Golden Bough and Frazer's wider body of work "has been in the literary rather than the academic world."[9]

Robert Ackerman writes that, for British social anthropologists, Frazer is still "an embarrassment" for being "the most famous of them all" while they now dissociate themselves "from much that he wrote." While The Golden Bough achieved wide "popular appeal" and exerted a "disproportionate" influence "on so many [20th century] creative writers", Frazer's ideas played "a much smaller part" in the history of academic social anthropology. Lienhardt himself dismissed Frazer's interpretations of primitive religion as "little more than plausible constructs of [Frazer's] own Victorian rationalism", while Ludwig Wittgenstein, in his Remarks on Frazer's Golden Bough (1979), wrote: "Frazer is much more savage than most of his 'savages' [since] his explanations of [their] observances are much cruder than the sense of the observances themselves."[9]

Initially, the book's influence on the emerging discipline of anthropology was pervasive. For example, the Polish anthropologist Bronisław Malinowski read Frazer's work in the original English, and afterwards wrote: "No sooner had I read this great work than I became immersed in it and enslaved by it. I realized then that anthropology, as presented by Sir James Frazer, is a great science, worthy of as much devotion as any of her elder and more exact studies and I became bound to the service of Frazerian anthropology."[10] However, by the 1920s, Frazer's ideas "began to belong to the past":

In 1922, simultaneously with the publication of the first abridged edition of The Golden Bough, came Malinowski's Argonauts of the Western Pacific and Radcliffe-Brown's The Andaman Islanders, the first outstanding products of the British field research tradition that Frazer had very actively encouraged. As every first-year student knows, these monographs began to point students towards empirical studies of Frazer's 'savages', who, when spoken to in their own homes and languages, were found to have much more of interest to say for themselves than Frazer had to say about them. The central theme (or, as he thought, theory) of The Golden Bough—that all mankind had evolved intellectually and psychologically from a superstitious belief in magicians, through a superstitious belief in priests and gods, to enlightened belief in scientists—had little or no relevance to the conduct of life in an Andamanese camp or a Melanesian village, and the whole, supposedly scientific, basis of Frazer's anthropology was seen as a misapplication of Darwin's theory of biological evolution to human history and psychology.[9]

Edmund Leach, "one of the most impatient critics of Frazer's overblown prose and literary embellishment of his sources for dramatic effect", was scathing of the artistic license exercised by Frazer in The Golden Bough, saying: "Frazer used his ethnographic evidence, which he culled from here, there and everywhere, to illustrate propositions which he had arrived at in advance by a priori reasoning, but, to a degree which is often quite startling, whenever the evidence did not fit he simply altered the evidence!"[5][9]

René Girard, a French historian, literary critic, and philosopher of social science, "grudgingly" praised Frazer for recognising kingly sacrifice as "a key primitive ritual", but described his interpretation of the ritual as "a grave injustice to ethnology."[11][12] Girard's "grievances" against The Golden Bough were numerous, particularly concerning Frazer's assertion that Christianity was merely a perpetuation of primitive myth-ritualism and that the New Testament Gospels were "just further myths of the death and resurrection of the king who embodies the god of vegetation."[11] Girard himself considered the Gospels to be "revelatory texts" rather than myths or the remains of "ignorant superstition", and rejected Frazer's idea that the death of Jesus was a sacrifice, "whatever definition we may give for that sacrifice."[11][12][13]

Despite the controversy generated by the work, and its critical reception amongst other scholars, The Golden Bough inspired much of the creative literature of the period. The poet Robert Graves adapted Frazer's concept of the dying king sacrificed for the good of the kingdom to the romantic idea of the poet's suffering for the sake of his Muse-Goddess, as reflected in his book on poetry, rituals, and myths, The White Goddess (1948). William Butler Yeats refers to Frazer's thesis in his poem "Sailing to Byzantium". The horror writer H. P. Lovecraft's understanding of religion was influenced by The Golden Bough,[14] and Lovecraft mentions the book in his short story "The Call of Cthulhu".[15] T. S. Eliot acknowledged indebtedness to Frazer in his first note to his poem The Waste Land. William Carlos Williams refers to The Golden Bough in Book Two, part two, of his extended poem in five books Paterson.[16] The Golden Bough influenced Sigmund Freud's work Totem and Taboo (1913).[17] Frazer's work also influenced the psychiatrist Carl Jung,[18] the novelist James Joyce,[19] Ernest Hemingway, and the novelist D. H. Lawrence.[19]

The mythologist Joseph Campbell drew on The Golden Bough in The Hero with a Thousand Faces (1949), where he accepted Frazer's view that mythology is a primitive attempt to explain the world of nature, though considering it only one among a number of valid explanations of mythology.[20] Campbell later described Frazer's work as "monumental".[21] The anthropologist Weston La Barre, writing in The Human Animal (1955), described Frazer as "the last of the scholastics" and wrote that Frazer's work was "an extended footnote to a line in Virgil he felt he did not understand."[22] The lyrics of the musician Jim Morrison's song "Not to Touch the Earth" were influenced by the table of contents of The Golden Bough.[23] The philosopher Ludwig Wittgenstein's commentaries on The Golden Bough have been compiled as Remarks on Frazer's Golden Bough, edited by Rush Rhees, originally published in 1967 (the English edition followed in 1979).[24] Robert Ackerman, in his The Myth and Ritual School: J. G. Frazer and the Cambridge Ritualists (1991), sets Frazer in the broader context of the history of ideas. The myth and ritual school includes scholars Jane Harrison, Gilbert Murray, F. M. Cornford, and A.B. Cook, who were connecting the new discipline of myth theory and anthropology with traditional literary classics at the end of the 19th century, influencing Modernist literature.[citation needed]

The critic Camille Paglia has cited The Golden Bough as one of the most important influences on her book Sexual Personae (1990).[18] She has described it in Salon as "a model of intriguing specificity wed to speculative imagination." Paglia acknowledged that "many details in Frazer have been contradicted or superseded", but maintained that the work of Frazer's Cambridge school of classical anthropology "will remain inspirational for enterprising students seeking escape from today's sterile academic climate."[25] Paglia has also commented, however, that the one-volume abridgement of The Golden Bough is "bland" and should be "avoided like the plague."[19]