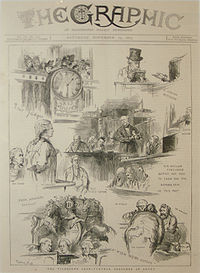 Front page of The Graphic during the Tichborne Case in 1873

The influence of The Graphic within the art world was immense, its many admirers included Vincent Van Gogh, and Hubert von Herkomer.[1]

It continued to be published weekly under this title until 23 April 1932 and then changed title to The National Graphic between 28 April and 14 July 1932; it then ceased publication after 3,266 issues. From 1889 Luson Thomas's company, H. R. Baines and Co. published The Daily Graphic. 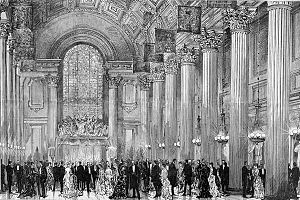 An illustration from the newspaper from 1884

The Graphic was founded by William Luson Thomas, a successful artist, wood engraver and social reformer. Earlier he, his brother and his brother-in-law had been persuaded to go to New York and assist in launching two newspapers, Picture Gallery and Republic. Thomas also had an engraving establishment of his own and, aided by a large staff, illustrated and engraved numerous standard works.[2] Exasperated, even angered, by the unsympathetic treatment of artists by the world's most successful illustrated paper, The Illustrated London News, and having a good business sense Luson Thomas resolved to set up an opposition. His illustrated paper, despite being more expensive that its competition, became an immediate success.[1]

When it began in 1869, the newspaper was printed in a rented house. By 1882, the company owned three buildings and twenty printing presses, and employed more than 1,000 people. The first editor was Henry Sutherland Edwards. A successful artist himself, founder Thomas recruited gifted artists including Luke Fildes, Hubert von Herkomer, Frank Holl, and John Millais.

The Graphic was published on a Saturday and its original cover price was sixpence, while the Illustrated London News was fivepence.[1] In its first year, it described itself to advertisers as "a superior illustrated weekly newspaper, containing twenty-four pages imperial folio, printed on fine toned paper of beautiful quality, made expressly for the purpose and admirably adapted for the display of engravings".

In addition to its home market the paper had subscribers all around the British Empire and North America. The Graphic covered home news and news from around the Empire, and devoted much attention to literature, arts, sciences, the fashionable world, sport, music and opera. Royal occasions and national celebrations and ceremonials were also given prominent coverage.

Writers for the paper included George Eliot, Thomas Hardy, H. Rider Haggard and Anthony Trollope. [1] Malcolm Charles Salaman was employed there from 1890 to 1899. Beatrice Grimshaw travelled the South Pacific reporting on her experiences for the Daily Graphic.[3]

There were at least three pages dedicated to advertising and it is interesting to see the obsession with hygiene, with countless adverts for toothpaste and soap products (and 'miracle-cure' pills).

The Graphic was designed to compete with the famous Illustrated London News (established in 1842), and became its most successful rival. Earlier rivals such as the Illustrated Times and the Pictorial Times had either failed to compete or been merged with the ILN. It appealed to the same middle-class readership, but The Graphic, as its name suggests, was intended to use images in a more vivid and striking way than the rather staid ILN. To this end it employed some of the most important artists of the day, making an immediate splash in 1869 with Houseless and Hungry, Luke Fildes' dramatic image of the shivering London poor seeking shelter in a workhouse.

It is much more difficult to produce and print illustrations than type. Improvements in process work and machinery at the end of the 1880s allowed Luson Thomas to realise a long cherished project, a daily illustrated paper.[2]

Luson Thomas's seventh son George Holt Thomas was a director of the newspaper company and became general manager. Holt Thomas founded The Bystander and later Empire Illustrated before abandoning newspapers in 1906 and making a greater name for himself in the aviation industry.[4]

On August 15, 1932 Time Magazine reported the name change to The National Graphic and editor William Comyns Beaumont of The Bystander took over, replacing Alan John Bott.[5]