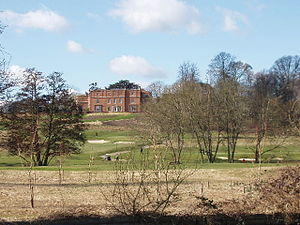 The Grove is a large hotel in Hertfordshire, England, with its own 300–acre (1.2 km²) private park next to the River Gade and the Grand Union Canal. It touches on its north-west corner the M25 motorway and remains a small part in Watford (St Luke) (

Since 2006 it has hosted the WGC-American Express Championship, the G20 London summit and the 2013 Bilderberg Conference.

It was remodelled by various architects including Surveyor of the King's Works, Robert Taylor on the site of a medieval manor house as a home for the Earls of Clarendon, second creation, the Villiers family who downsized their estates to one they have long held at Swanmore, Hampshire following the 1914 increase of estate duty.

It is on the green buffers of three settlements. Most of the land and all of the mansion itself, which has been altered and extended four times since its Georgian construction, is in Sarratt secularly, Langleybury ecclesiastically and Rickmansworth in terms of its post town.

The estate was sold in 1996 to Ralph Trustees Ltd, which extended the mansion and converted it to a hotel. Jeremy Blake, an architect with listed buildings and sustainability expertise, was appointed to undertake these works. The Grove is a former AA Hotel of the Year and was voted the UK’s Favourite Leisure Hotel by Condé Nast Traveler readers in 2008. It has 227 rooms, three restaurants, three bars and private rooms for parties, meetings and events.

The 2013 Bilderberg Conference took place in the hotel.[5]

The majority of the estate including the mansion is in the post town of Rickmansworth, having postal prefix WD3. However the east including the former mill is in Watford's first subdivision of post town (WD17). Watford was the estate's parish in all forms of local geography from 1086 until 1878.[6]

A similar minority is in the ecclesiastical parish of Watford (St Luke) however most of the land and all of the mansion itself is in Langleybury ecclesiastically since 1878, when that parish was founded.[7][8]

Secularly the mansion is in Sarratt civil parish.[1][9]

The hotel makes reference to Chandlers Cross, the nearest settlement, formerly part of another parish and which has a nucleus to the west. It has now become the smaller of two settlements in the neighbouring ecclesiastical parish of Chipperfield however is in the same parish in terms of local government.[8]

Excavations on the estate in 2002 revealed evidence from all periods of human cultural development. The earliest evidence of human activity is a Neolithic polished stone axe that was discovered in a small pit with the remains of a pot that appears to be of Middle Bronze Age. The first evidence of settlement consists of traces of oval and circular dwelling structures from the Early Bronze Age (around 4,000 years old). The Iron Age gives some pottery evidence but none of settlement. Two burials have been found dating to the Roman period, although they seem to be in the native rather than Roman tradition. Traces of Saxon settlement, rare in Hertfordshire, have been found. There are remains of at least eight grubenhause, sunken-floored buildings that are typical of this period. Medieval pottery contemporary with the building of the first manor house have been found in ditches.[10]

First references to The Grove

In 1294–5 John de Brittewell and Sarah his wife conveyed land and a third part of a mill written as 'La Grava' to Albreda de Brittewell and her two sisters Alice and Ellen. In 1324–5 Thomas de Harpesfield and Joan his wife held land in the demesne of St Albans at La Grava in the vill of Cassio, and the abbot released them from rent due for it. There is a monumental inscription in Watford church to John Heydon of the Grove, who died in 1400. John Rayner and Joan his wife conveyed the manor in 1481–2 to John Fortescue, John Sturgeon, John Forster, and Henry Heydon, for the use of John Fortescue. Upon its administration in the Court of Chancery the estate passed to John Melksham or Melsam, who died in 1487, leaving John his son and heir, who, in 1503 with his wife Elizabeth, granted it to Reginald Pegge reserving a rent of £10. It passed to his son William, who, with Margaret his wife and the late wife of Pegge snr. (and her new husband Geoffrey Oxley), conveyed the manor in 1518 to William (d.1545) and John Heydon. William's son was Henry (d. 1559) who inherited and left the Grove to his son Francis, who sold the manor in 1602 to Clement Scudamore.

He sold it in 1631 and two water-mills under one roof, called the Grove Mills, to Sir William Ashton who left it to his second son Robert. His son died without issue in 1703 so it passed to Sir William Buck who died in 1717, great-grandson of Sir William Ashton. It passed to son Charles Buck, who had it totally rebuilt (see below) and in 1728 sold it to the trustees of Fulke Greville, born 1717. He in 1743 sold it to Arthur M. St Leger, 3rd Viscount Doneraile, who conveyed it in 1748 in legal title not equity to Charles Unwin (as his trustee) — so on death in 1750 without issue, Doneraile's will confirmed his wish it pass to cousin Elizabeth St Leger 'until marriage' — she then married Major Ralph Burton.

On her marriage the estate re-vested in trustees, who sold it in 1753 to the Hon. Thomas Villiers, successful diplomat and second son of William Villiers, 2nd Earl of Jersey.[6]

He was also responsible for four fireplaces, one of which was destroyed to make way for a secretary’s desk when it was railway offices. A replica of the fireplace has been created within the restoration of the mansion.

Seat for the new Earls of Clarendon

The purchaser of The Grove, Thomas Villiers, had married the heiress to the wealthiest branch of the Hyde family whose 1st Earl was a minister under Charles, Charles II and grandfather of Anne and Mary.

Thomas was soon created Lord Hyde (Baron Hyde of Hindon) for his diplomatic services in 1756 and in 1776 the Crown revived the old Earldom and raised him to 1st Earl of Clarendon (second creation).[6]

The fourth earl was a statesman, diplomat (architect of the Quadruple Alliance of 1834), Secretary of State for Foreign Affairs, Lord Privy Seal, Chancellor of the Duchy of Lancaster, President of the Board of Trade, Lord Lieutenant of Ireland and gained non-occupational titles KG and KGCB.

The Villiers family sold The Grove in the 1920s, downsizing their estate in view of reducing Estate Tax, after which The Grove was used as a gardening school, a health centre (National Institute Of Nutrition and College Of Dietetics), a riding school, and a girls' boarding school.[12] It was the wartime headquarters of one of the Big Four consolidated railway companies. It became a management training centre for the British Transport Commission and later British Rail.[13]