From Infogalactic: the planetary knowledge core
(Redirected from The Guinness Book of Records)
Jump to: navigation, search

Guinness World Records, known from its inception in 1955 until 1998 as The Guinness Book of Records and in previous U.S. editions as The Guinness Book of World Records, is a reference book published annually, listing world records, both human achievements and the extremes of the natural world. The book itself holds a world record, as the best-selling copyrighted book of all time.[2][better source needed] It is one of the most frequently stolen books from public libraries in the United States.[3] As of the 2016 edition, it is now in its 62nd year of publication. The international franchise has extended beyond print to include television series and museums. The popularity of the franchise has resulted in Guinness World Records becoming the primary international authority on the cataloguing and verification of a huge number of world records; the organization employs official record adjudicators authorised to verify the authenticity of the setting and breaking of records.[4]

On 10 November 1951, Sir Hugh Beaver, then the managing director of the Guinness Breweries,[5] went on a shooting party in the North Slob, by the River Slaney in County Wexford, Ireland. After missing a shot at a golden plover, he became involved in an argument over which was the fastest game bird in Europe, the golden plover or the red grouse (it is the plover).[6] That evening at Castlebridge House, he realised that it was impossible to confirm in reference books whether or not the golden plover was Europe's fastest game bird.[7][8] Beaver knew that there must be numerous other questions debated nightly in pubs throughout Ireland and abroad, but there was no book in the world with which to settle arguments about records. He realised then that a book supplying the answers to this sort of question might prove successful.[9]

Beaver's idea became reality when Guinness employee Christopher Chataway recommended University friends Norris and Ross McWhirter, who had been running a fact-finding agency in London. The brothers were commissioned to compile what became The Guinness Book of Records in August 1954. A thousand copies were printed and given away.[10]

After the founding of The Guinness Book of Records at 107 Fleet Street, the first 198-page edition was bound on 27 August 1955 and went to the top of the British best seller lists by Christmas. Beaver said: "It was a marketing give away – it wasn't supposed to be a money maker".[citation needed] The following year, it launched in the US, and sold 70,000 copies. Since then, Guinness World Records has become a household name and the global leader in world records. The book has gone on to become a record breaker in its own right, with sales of more than 100 million copies in 100 different countries and 37 languages, Guinness World Records is the world's best selling copyright book ever.[11]

Because the book became a surprise hit, many further editions were printed, eventually settling into a pattern of one revision a year, published in September/October, in time for Christmas. The McWhirters continued to compile it for many years. Both brothers had an encyclopedic memory; on the TV series Record Breakers, based upon the book, they would take questions posed by children in the audience on various world records and were able to give the correct answer. Ross McWhirter was assassinated by the Provisional Irish Republican Army in 1975.[12] Following Ross' assassination, the feature in the show where questions about records posed by children were answered was called Norris on the Spot.

Lucky Diamond Rich is "the world's most tattooed person", and has tattoos covering his entire body. He holds the Guinness world record as of 2006, being 100 percent tattooed.

Recent editions have focused on record feats by person competitors. Competitions range from obvious ones such as Olympic weightlifting to the longest egg tossing distances, or for longest time spent playing Grand Theft Auto IV or the number of hot dogs that can be consumed in ten minutes, although eating and alcohol consumption entries are no longer accepted, possibly for fear of litigation. Besides records about competitions, it contains such facts as the heaviest tumour, the most poisonous plant, the shortest river (Roe River), the two longest-running dramas (General Hospital and Guiding Light) in the US, and the world's most successful salesman (Joe Girard), among others. Many records also relate to the youngest person who achieved something, such as the youngest person to visit all nations of the world, being Maurizio Giuliano.[13]

Each edition contains a selection of the large set of records in the Guinness database; the criteria for inclusion changed over the years. New records are added.

The ousting of Norris McWhirter from his consulting role in 1995 and the subsequent decision by Diageo Plc to sell the Guinness World Records brand have shifted it from a text-oriented to an illustrated reference book. The majority of world records are no longer listed in the book or on the website, and can only be determined by a written application to Guinness to 'break' the record. For those unable to wait the 4–6 weeks for a reply, Guinness will process a 'fast-track' application for £300 (US$450).

The Guinness Book of Records is the world's most sold copyrighted book, earning it an entry within its own pages. A number of spin-off books and television series have also been produced.

Guinness World Records bestowed the record of "Person with the most records" on Ashrita Furman of Queens, NY in April 2009. At that time, he held 100 records.[14] 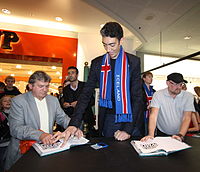 Sultan Kösen (Turkey) is the tallest living person since 17 September 2009, as verified by Guinness World Records. Turkey has 80 records in the book.[17]
File:Cracking a Parmesan Wheel-9MAR2013.ogv
Cracking open a wheel of Parmigiano-Reggiano cheese as a part of a 2013 world record by Whole Foods Market.[18]

For many records, Guinness World Records is the effective authority on the exact requirements for them and with whom records reside, the company providing adjudicators to events to determine the veracity of record attempts. The list of records which the Guinness World Records covers is not fixed; records may be added and also removed for various reasons. The public are invited to submit applications for records, which can be either the bettering of existing records or substantial achievements which could constitute a new record.[4] The company also provides corporate services for companies to "harness the power of record-breaking to deliver tangible success for their businesses."[19] Steven Petrosino drinking 1 liter of beer in 1.3 seconds in June 1977.[20][21] Petrosino set record times for 250 ml, 500 ml and 1.5 liters as well, but Guinness accepted only the record for one liter. They later dropped all beer and alcohol records from their compendium in 1991, and reinstated the records in 2008.

Guinness World Records states several types of records it will not accept for ethical reasons, such as those related to the killing or harming of animals.[22]

Several world records that were once included in the book have been removed for ethical reasons, including concerns for the wellbeing of potential record breakers. For example, following publication of a "heaviest fish" record, many fish owners overfed their pets beyond the bounds of what was healthy, and therefore such entries were removed.[23] The Guinness Book also dropped records within their "eating and drinking records" section of Human Achievements in 1991 over concerns that potential competitors could harm themselves and expose the publisher to potential litigation.[24] These changes included the removal of all liquor, wine, and beer drinking records, along with other unusual records for consuming such unlikely things as bicycles and trees.[24] Other records, such as sword swallowing and rally driving (on public roads), were closed from further entry as the current holders had performed beyond what are considered safe human tolerance levels.

There have been instances of closed records being reopened. For example, the sword swallowing record was listed as closed in the 1990 Guinness Book of World Records, but the Guinness World Records Primetime TV show, which started in 1998, accepted three sword swallowing challenges (and so did the 2007 edition of the Guinness World Records onwards). Similarly, the speed beer drinking records which were dropped from the book in 1991, reappeared 17 years later in the 2008 edition, but were moved from the "Human Achievements" section of the older book[25] to the "Modern Society" section of the newer edition.[26]

As of 2011, it is required in the guidelines of all "large food" type records that the item be fully edible, and distributed to the public for consumption, to prevent food wastage.[4][dead link]

Chain letters are also not allowed: "Guinness World Records does not accept any records relating to chain letters, sent by post or e-mail. If you receive a letter or an e-mail, which may promise to publish the names of all those who send it on, please destroy it, it is a hoax. No matter if it says that Guinness World Records and the postal service are involved, they are not."[4]

For some potential categories, Guinness World Records has declined to list records due to the difficulty or impossibility of determining what constitutes a record-breaking achievement. For example, its website states: "We do not accept any claims for beauty as it is not objectively measurable."[22]

On 10 December 2010, Guinness World Records rested its new "dreadlock" category after investigation of its first and only female title holder, Asha Mandela, determining it was impossible to judge this record accurately.[27] 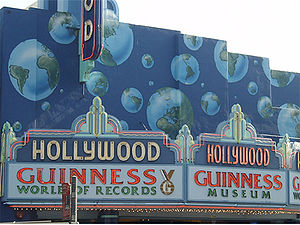 In 1976, a Guinness Book of World Records museum opened in the Empire State Building. Speed shooter Bob Munden then went on tour promoting The Guinness Book of World Records by performing his record fast draws with a standard weight single-action revolver from a western movie type holster. His fastest time for a draw was .02 seconds.[28] Among exhibits were life-size statues of the world's tallest man (Robert Wadlow) and world's largest earth worm, an X-ray photo of a sword swallower, repeated lightning strike victim Roy Sullivan's hat complete with lightning holes and a pair of gem-studded golf shoes on sale for $6500.[29] The museum closed in 1995.[30]

In more recent years the Guinness company has permitted the franchising of small museums with displays based on the book, all currently (as of 2010) located in towns popular with tourists: Tokyo, Copenhagen, San Antonio. There were once Guinness World Records museums and exhibitions at the Trocadero in London, Bangalore, San Francisco, Myrtle Beach, Orlando,[31] Atlantic City, New Jersey,[32] and Las Vegas, Nevada.[33] The Orlando museum, which closed in 2002, was branded The Guinness Records Experience;[31] the Hollywood, Niagara Falls, Copenhagen, and Gatlinburg, Tennessee museums also previously featured this branding.[33]

With the popularity of reality television, Guinness World Records began to market itself as the originator of the television genre, with slogans such as we wrote the book on Reality TV.[citation needed] The McWhirters co-presented the BBC television programme Record Breakers with Roy Castle from 1972 until Ross's death in 1975; Norris continued appearing on the show until his retirement in 1994.[citation needed] 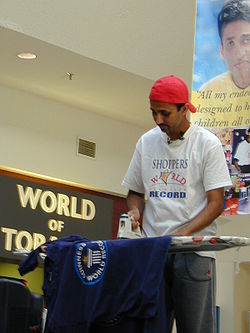 Suresh Joachim Arulanantham is a Tamil Canadian film actor and producer and multiple-Guinness World Record holder who has broken over 50 world records set in several countries in attempts to benefit the underprivileged children around the world. Some world record attempts are more unusual than others: he is pictured here minutes away from breaking the ironing world record at 55 hours and 5 minutes, at Shoppers World, Brampton.

A video game, Guinness World Records: The Video Game, was developed by TT Fusion and released for Nintendo DS, Wii and iOS in November 2008.

In 2012, Warner Bros. announced the development of a live-action film version of Guinness World Records with Daniel Chun as scriptwriter. The film version will apparently use the heroic achievements of record holders as the basis for a narrative that should have global appeal.[34]

In 2006, Michael Jackson visited the office of Guinness World Records in London to collect 8 certificates of official records related to his successful career as a singer, dancer and composer of songs.