The Haunting of Villa Diodati

"The Haunting of Villa Diodati" is the eighth episode of the twelfth series of the British science fiction television programme Doctor Who, first broadcast on BBC One on 16 February 2020. It was written by Maxine Alderton, and directed by Emma Sullivan.

The episode stars Jodie Whittaker as the Thirteenth Doctor, alongside Bradley Walsh, Tosin Cole, and Mandip Gill as her companions, Graham O'Brien, Ryan Sinclair and Yasmin Khan, respectively. The episode is centered around the historical origins of the 1818 novel Frankenstein; or, The Modern Prometheus by Mary Shelley, portrayed by Lili Miller, and takes place at the Villa Diodati in 1816 where she was inspired to write the work. The episode also featured the return of the Cybermen in their first television appearance since the tenth series finale "The Doctor Falls" (2017).

The episode was watched by 5.07 million viewers, and received positive reviews from critics. 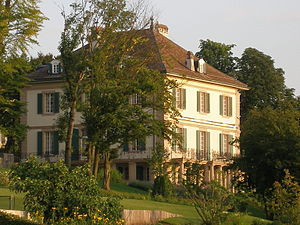 The Doctor takes Graham, Ryan, and Yaz to Lake Geneva in 1816 to witness Mary Shelley gain the inspiration to write Frankenstein, though warns them about revealing this to her. The group meet Mary along with her husband-to-be Percy Bysshe Shelley and her infant William, along with John Polidori, Claire Clairmont, and Lord Byron at the Villa Diodati. Because of the inclement weather, Byron suggests each write a ghost story to scare the others.

Percy soon goes missing, having left strange gibberish on the walls of his room, and strange events occur in the villa, such as the rearrangement of its layout. Byron suggests it is a ghost that haunts the villa but the Doctor suspects something else is occurring, the events part of a security system to prevent finding something. The group sees an apparition which the Doctor recognises as a being moving through time; the apparition resolves into a half-converted Cyberman.

Graham, Ryan and Yaz remind the Doctor of Jack Harkness's warning of the "lone Cyberman" and giving it what it wants, but she angrily orders them not to follow her, and tells them to protect Mary and the others, before heading off to confront the Cyberman. The Cyberman, named Ashad, was sent back in time to look for the "Cyberium", a liquid metal with the collective knowledge of the Cybermen. Ashad had tracked it to the villa but since his power has been sapped. As the Doctor tries to lure Ashad away from the villa, he is struck by lightning, recharging his power core, and he prepares to attack the villa again.

The Doctor races to warn the others but instead finds Percy hiding in the cellar with a crazed look. She discovers he is possessed by the Cyberium, having found it a few days prior, and the Cyberium had created the supernatural events to prevent discovery. She brings Percy to Ashad, and to stop Ashad from killing him, tricks the Cyberium to leave Percy's body and enter hers. Ashad threatens to destroy the planet, forcing the Doctor to turn it back over to him, despite Harkness's warning.

The Doctor and her companions depart, making plans to follow Ashad to the future using coordinates from Percy's Cyberman-based writings. After they leave, Mary reveals to the others she was inspired by Ashad's appearance, "this modern Prometheus", and plans to write a story based on their experience. 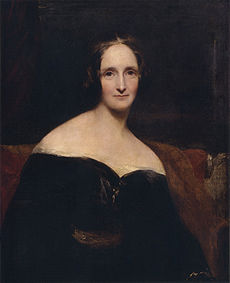 This episode is not the first Doctor Who work to feature Mary Shelley, who had been incorporated in the Big Finish audioplays.

Jack Harkness had asked Graham, Ryan, and Yaz to warn the Doctor of the "lone Cyberman" in the episode "Fugitive of the Judoon". The Doctor, in warning her companions away from the Cyberman, is implied to reference Bill Potts, a former companion of the Twelfth Doctor who was cyberconverted during the events of "World Enough and Time".[1][2]

A series of Doctor Who Big Finish audioplays involve the Eighth Doctor meeting Mary Shelley around 1816, upon which she had joined him briefly as a companion. One 2011 audioplay, The Silver Turk, involves the two meeting a damaged Cyberman, which became similar inspiration for Shelley to write Frankenstein.[3]

Lord Byron was the father of Ada Lovelace whom the Doctor and her companions had met in 1834 in this season's two-part premiere "Spyfall".[1]

"The Haunting of Villa Diodati" was written by Maxine Alderton.[4][5] Chris Chibnall called Alderton "an absolute Mary Shelley and Byron… not a buff, she's an expert in that".[6] Much of the setup of the episode is true to known fact for Lord Bryon, Mary, and the others, including that the summer during their stay at the villa was unusually stormy due to the 1815 eruption of Mount Tambora that led to the "Year Without a Summer".[6]

Emma Sullivan directed the fourth block of the seventh and eighth episodes.[11]

The Merthyr Mawr estate was the filming location for the villa's interiors.[12]

"The Haunting of Villa Diodati" was watched by 3.86 million viewers overnight, making it the seventh most watched programme for the day in the United Kingdom.[13] The episode had an Audience Appreciation Index score of 80.[14] The episode received an official total of 5.07 million viewers across all UK channels and was the 31st most watched programme of the week.[14]

On Rotten Tomatoes, the episode received an approval rating of 94% based on reviews from 16 critics, with an average rating of 7.9/10. The site's consensus state: "A proper ghost story that strikes the perfect balance between horror and history, 'The Haunting of Villa Diodati' is Doctor Who at its best."[15]