From Infogalactic: the planetary knowledge core
Jump to: navigation, search
For other Highways, see Highway (disambiguation).

The Highway, formerly known as the Ratcliffe Highway, is a road in the East End of London.

The route dates back to Roman times. In the 19th century it had a notorious reputation for vice and crime and was the location of the infamous Ratcliff Highway murders. The name 'Ratcliffe' literally means 'red cliff', referring to the red sandstone cliffs which descended from the plateau on which the road was situated down to the Wapping Marshes to the south.

The Highway runs west-east from the eastern edge of London's financial district, the City of London, to Limehouse. It runs parallel to and south of Commercial Road, the Docklands Light Railway and Cable Street. It connects East Smithfield and the Limehouse Link tunnel.

The road forms an unofficial boundary of Wapping, which lies between the River Thames and The Highway. It is also close to Shadwell Basin to the southeast, Tower Hill to the west, and Whitechapel and Stepney to the north.

The Highway is in the London Borough of Tower Hamlets, in postal districts E1, E1W and E98. It lies within the parliamentary constituencies of Bethnal Green and Bow and Poplar and Canning Town.

The Ratcliffe (sometimes Ratcliff) Highway was probably originally a Roman road, running east from the City of London, London's historic core, along the top of a plateau near the edge of the eponymous 'red cliff' which descended onto the low-lying tidal marshes of Wapping to the south.

In the late 1800s Charles Jamrach, then the world's most renowned dealer in wild animals, opened Jamrach's Animal Emporium on The Highway. The store became the largest pet store in the world as seafarers moored at the Port of London sold any exotic animals they had brought with them to Jamrach, who in turn supplied zoos, menageries and private collectors. At the north entrance to the nearby Tobacco Dock stands a bronze sculpture of a boy standing in front of a tiger, commemorating an incident where a fully-grown Bengal tiger escaped from Jamrach's shop into the street and picked up and carried off a small boy, who had approached and tried to pet the animal having never seen such a big cat before. The boy escaped unhurt after Jamrach gave chase and prised open the animal's jaw with his bare hands. The tale was the inspiration for the 2011 novel Jamrach's Menagerie by British author Carol Birch.[1]

By 1908 Ratcliff Highway had different names for each of its sections. From west to east these ran: St. George's Street East, High Street (Shadwell), Cock Hill, and Broad Street. The whole of the central area of The Highway was named after St. George in the East church and the parish of St. George in the East.

A Roman bath house was excavated in 2004 by the junction of The Highway and Wapping Lane. The discovery of women's jewellery along with soldiers' possessions suggested that this location outside of the Roman walls allowed less restricted use of the baths than those in the City itself. The remains of the baths and under-floor heating system were re-buried (for later archaeologists) under the car-park of a development of new apartments.

Listed from west to east:

The Highway is a major arterial route into and out of the City of London and can become heavily congested during rush hour. There are two lanes in each direction throughout its length. It lies outside of the London congestion charge zone (CCZ).

There are few bus stops on The Highway, but London Buses routes 100 and D3 pass along short lengths of it. Route 100 connects to Shadwell, Liverpool Street, St. Paul's and Elephant and Castle, while D3 connects to the Isle of Dogs, Limehouse, Shadwell and Bethnal Green.

The following stations are located on or near The Highway, all in Transport for London's fare zone 2:

Some names associated with the area include: 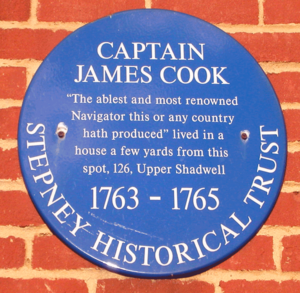 Blue plaque for Captain James Cook, who lived in the area.

West of The Highway:

North of The Highway, from west to east:

East of The Highway:

South of The Highway, from west to east: