The History Press is a British publishing company specialising in the publication of titles devoted to local and specialist history. It claims to be the United Kingdom's largest publisher in this field,[1] publishing approximately 500 books per year.[2]

Created in December 2007, The History Press has integrated core elements of the NPI Media Group within it, including all existing published titles, plus all the future contracts and publishing rights contained in them. Its imprints include Phillimore, Pitkin, Spellmount, Stadia, Sutton Publishing and Tempus Publishing.

The History Press can be traced back to the 1970s with the first title published in 1978[citation needed]. The company evolved from the amalgamation of a number of smaller publishing houses that formed part of the NPI Media Group. The largest component of the NPI Media Group was Tempus Publishing, founded by Alan Sutton in 1993.

Tempus Publishing's early years were spent producing local history titles, principally books of old photographs depicting towns and villages throughout the UK.[3] Tempus Publishing opened offices in both the USA and Europe which are in use today by The History Press.[4]

During the 1990s, the list diversified in a number of directions. Tempus Publishing produced their first books on archaeology, as well as books on more general history subjects. The organisation became a leading publisher of Transport material including maritime history.[5]

Local History remained the bedrock of Tempus Publishing with (at the time of amalgamation into The History Press) over 1500 titles now published.

Tempus Publishing ceased operations in 2007 at the same time as the formation of The History Press and thereafter became an imprint, along with Pathfinder, Phillimore, Pitkin, Spellmount, Stadia and Sutton Publishing.

The History Press published their first app[6] in 2012, entitled Titanic: Her Journey, as part of their wider Titanic campaign to honour the centenary of her sinking. In March 2012, they released their first real-time Twitter account @Titanicrealtime which offered day-by-day and minute-by-minute accounts of Titanic's maiden voyage[7][8] 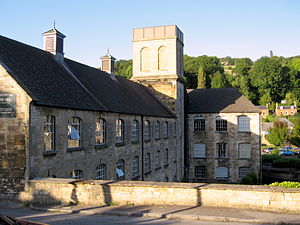 The History Press, based in and around Stroud in Gloucestershire is supported by international offices in the United States,[9] Germany,[10] Ireland,[11] France[12] and Belgium.[13] Their UK office is in the The Mill building in Brimscombe Port, Stroud.[14]