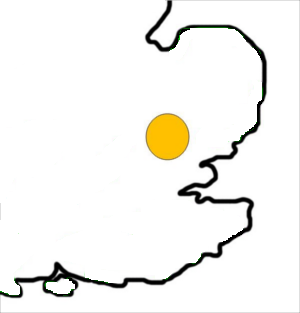 Approximate location and scale of the Hundred Parishes within Southeast England.

File:Hundred Parishes outline diagram.pdf The Hundred Parishes is an area of South East England with no formal recognition or status. It encompasses around 450 square miles (1,100 square kilometres) of northwest Essex, northeast Hertfordshire and southern Cambridgeshire. The area comprises just over 100 administrative parishes, hence its name. It contains over 6,000 listed buildings and many conservation areas,[1][2][3][4] village greens, ancient hedgerows and other protected features. The historical pattern of small rural settlements in close proximity to one another remains largely intact and has generated an extensive network of public rights of way that offer fine views over the gently-undulating countryside. It is an area that is rich in photogenic villages, of which just a few are shown here. 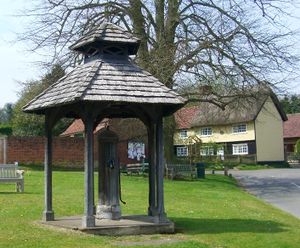 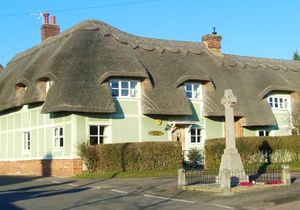 The idea of recognising the area for its special heritage characteristics was originally conceived by local historian and author David Heathcote.[5][6] A steering group of local historians, conservationists and a local authority representative, spearheaded by the Essex branch of the Campaign to Protect Rural England (CPRE), progressed the idea and defined a boundary.[7] The name arose in response to the fact that the defined area covered just over 100 administrative parishes. The initiative steadily gained support and the Hundred Parishes name was approved in 2012 at a constitutional conference to which all local authorities and many other local organisations were invited.[8] The conference was attended by delegates from more than 30 authorities and organisations and The Hundred Parishes Society was established as a company limited by guarantee immediately afterwards.[9][10][11][12] After a period of gathering information, fundraising and building a website, the Society was awarded charitable status in July 2014 and immediately set about promoting the concept to a wider audience.

The Hundred Parishes is at its highest in the chalk hills in the northwest of the area, generally sloping down towards the southeast. The whole area lies between 100 and 500 feet (30 and 150 metres) above sea level.

Many of the area’s individual parishes appear in the Domesday Book of 1086 and there is considerable evidence of earlier settlements. Relics from the Iron Age and Bronze Age have been found in a number of locations. Roman roads include Stane Street, passing from east to west across the southern part of the area, and Ermine Street, running north-south close to the western boundary of the Hundred Parishes. An ancient long-distance trackway, the Icknield Way, which may pre-date the Roman roads, passes from west to east through the northern part of the Hundred Parishes. Roman burial mounds survive at Bartlow. Saxon churches can be visited at Strethall[13] and Chickney[14] and there are many medieval churches, barns, farmhouses and other buildings.

There has been a long connection with royalty. Hatfield Forest was first used for hunting deer by the Norman kings and, after 1000 years, is England’s only remaining intact royal hunting forest. Henry VIII’s children grew up at a palace at Hunsdon, where he would hunt. Later, Elizabeth I stayed at several homes in the Hundred Parishes. James I and Charles II passed through regularly, staying overnight on their journeys from London to horseracing at Newmarket. Before he became Edward VII, the Prince of Wales had been a regular visitor to Easton Lodge, the home of one of his mistresses, Daisy, Countess of Warwick.

The area is relatively dry and has limited mineral sources, so it avoided the Industrial Revolution of the 18th and 19th centuries. Much of the Hundred Parishes is high grade farmland, so has long been a source of food supply for London, just 20 miles to the south. The area has benefited over the centuries from trade in wool, barley and other agricultural products. Satisfying the ever-growing demand from London was helped by the construction of the Stort Navigation canal in the 18th century and a number of railways in the 19th century. Many of the railway lines were closed in the mid 20th century, but the London Liverpool Street – Cambridge line, passing from south to north through the middle of the Hundred Parishes today enables many residents to commute to either London or Cambridge.

During World War II, there were eleven military airfields in the Hundred Parishes. Some are still operational in a small way, but that at Stansted developed into an international airport. Today it is the region’s major employer with around 10,000 people. It is situated in the centre of southern Hundred Parishes, but has been omitted, along with adjacent Bishop’s Stortford, from the Hundred Parishes as they have quite different characteristics to the generally rural nature of the defined area.

Following World War II, there was much expansion and new development around London. The Hundred Parishes generally avoided these developments, retaining its largely rural characteristics. The M11 motorway between London and Cambridge was opened between 1975 and 1980, bringing relief from heavy traffic to many villages along the old A11 road. The area might now be classified as “quintessential England”. Some of the area’s character was captured in the television series “Lovejoy”, which was filmed in many locations here and broadcast between 1986 and 1994.[15] Relatively few residents now work on the land, with many engaged in small local commercial enterprises or commuting by rail or car to nearby towns and cities.

Saffron Walden is the area’s largest settlement, with a population of 15,000. It has been a market town since the 12th century. There are three more market towns: Buntingford, Great Dunmow and Thaxted. Most of the area’s villages have a historical church, a pub and a village green, and most are within easy walking distance of the next settlement.

The Hundred Parishes has over 6,000 listed buildings, an especially high number for its population of around 140,000 – around 5 times the average ratio of listings to population for England as a whole. Of these listings, 99 are Grade I, of which 58 are churches.

Individual visitor attractions include Audley End House, a Jacobean mansion now cared for by English Heritage, and Hatfield Forest, a medieval royal hunting forest now within the care of the National Trust. The area has several small museums and galleries.

The Hundred Parishes has a strong cultural heritage from the 20th century when it was the home of, among others, Gustav Holst, H. G. Wells, Henry Moore and the Great Bardfield artists including Eric Ravilious and Edward Bawden. Henry Moore’s home and studio in Perry Green is open to the public. The artists are particularly celebrated at the Fry Art Gallery in Saffron Walden and Thaxted hosts annual festivals of classical music and Morris dancing.

This society, Registered Charity number 1157891, was formed to raise public consciousness of the area and to encourage preservation of the area’s special characteristics. It was formed in 2012 and launched to the general public in 2014 after being registered by the Charity Commission. Its website includes introductions to each of the area’s 104 administrative parishes and to a number of notable people associated with the area, as well as a series of walks from railway stations.[10]