From Infogalactic: the planetary knowledge core
Jump to: navigation, search
For the Argentine institution of the same name, see Hurlingham Club (Argentina).

The Hurlingham Club is an exclusive sports and social club located in Fulham, London, England. It has a Georgian clubhouse set in 42 acres (17 ha) of grounds. It is a member of The Association of London Clubs. 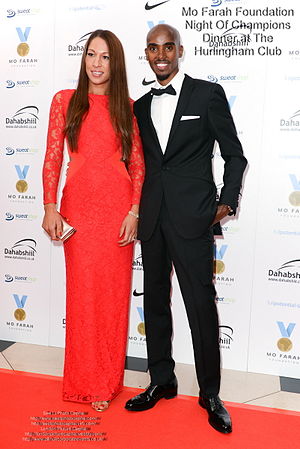 Mo Farah at the Night Of Champions Dinner at Hurlingham Club with his wife.

In 1867 Frank Heathcote received the permission of Richard Naylor to promote live pigeon shooting at his Hurlingham estate.[2] His next step was the formation of the Hurlingham Club for this purpose and 'as an agreeable country resort'.[3] The club leased the estate from Naylor in 1869 and in 1874 acquired the land outright for £27,500.[4] The pigeon today forms part of the club's crest. Until 1905, clouds of pigeons were released in the summer from an enclosure near what is now a tennis pavilion.

The Prince of Wales (later King Edward VII), an early patron, was a keen shot and his presence ensured the club's status and notability from the beginning. The current patron is HRH The Prince Philip, Duke of Edinburgh.

In 1873, the club published the rules of polo, which are still followed by most of the world to this day.[4][5][6][7] Polo was first played at the club on 6 June 1874.[4][8] On 18 July 1878, the club along with Ranelagh became the first to play a sports match under floodlights.[9] In 1886, the club hosted the first international polo match between England and the United States.[10] The polo matches for the 1908 Summer Olympics were played at Hurlingham. Three teams entered: Hurlingham, Roehampton Club, and a combined British and Irish team. Roehampton won.[11] The Westchester Cup was played at the club in 1900, 1902, 1909, 1921 and 1936.[4] Before the Second World War, Hurlingham was the headquarters of British polo. The governing body of British polo is called the Hurlingham Polo Association.[4] However polo is no longer staged at Hurlingham after the size of the club was significantly reduced after the war when the polo fields were compulsorily purchased to build council housing (the Sullivan Estate).[4] The Guards Polo Club in Windsor Great Park has succeeded to the status of the leading British polo club.

Hurlingham has been at the centre of world croquet for many years. The Croquet Association had its headquarters in the club from 1959 to 2002.[12] Top-ranking international competitions are regularly held on the lawns, at one time the finest in the country, though the CA headquarters have since relocated to the Cheltenham Croquet Club.

Other sports and events

Other sports include lawn tennis, cricket, bowls, skittles, squash and swimming (with both indoor and outdoor pools) as well as fitness facilities and a gymnasium. Games such as bridge, backgammon and chess are popular indoor pursuits. The club has also hosted the Grand Prix Ball [13] and the Concours d'Elegance.[14]

Members must be proposed and seconded by two current full members of the club. There is currently a thirteen-year waiting list for membership, but children of current members are given preference when vacancies do arise.

The club's membership is closed. [15]

The club currently has more than 10,000 members.

Lord Fowler, Lord Temple-Morris, Adam Raphael, the Carry On actress Liz Fraser, novelist and peer Jeffrey Archer, the actor Trevor Eve and his wife Sharon Maughan are all members of the Hurlingham Club.

Past members include Walter Buckmaster and Air Vice-Marshal Sir William Cushion. In 2011, Charles Nall-Cain, 3rd Baron Brocket was refused membership owing to his stint in prison.[16]