The Jeffersons is an American sitcom that was broadcast on CBS from January 18, 1975, through July 2, 1985, lasting 11 seasons and a total of 253 episodes. The show was produced by the T.A.T. Communications Company from 1975 to 1982 and by Embassy Television from 1982 to 1985. The Jeffersons is one of the longest-running sitcoms in the history of American television.[1][2]

The show focuses on George and Louise Jefferson, an affluent African-American couple living in New York City. The show was launched as the second spin-off of All in the Family, on which the Jeffersons had been the neighbors of Archie and Edith Bunker.

The show was the creation of prolific television producer Norman Lear. However, it was less sharply political in tone than some of his other shows. The Jeffersons eventually evolved into more of a traditional sitcom, relying more on the characters' interactions with one another than on explicitly political dialogue or storylines. It did, however, tackle a few controversial topics, including racism, suicide, gun control and adult illiteracy. Also, the words "nigger" and "honky" were used occasionally, especially during the earlier seasons.

The Jeffersons had one spin-off, titled Checking In. The short-lived series was centered on the Jeffersons' housekeeper, Florence. Checking In only lasted four episodes, after which Florence returned to The Jeffersons. The Jeffersons also shared continuity with the show E/R, which featured Lynne Moody, who made a guest appearance in one episode of The Jeffersons as George's niece. Sherman Hemsley guest-starred as George in two episodes of the series, which lasted for one season.

The show ended in controversy after CBS abruptly canceled the series without allowing for a proper series finale. The cast was not informed until after the July 2, 1985, episode "Red Robins", and actor Sherman Hemsley said he found out that the show was canceled by reading it in the newspaper.[3] Sanford, who heard about the cancellation through her cousin who read about it in the tabloids, has publicly stated that she found the cancellation with no proper finale to be disrespectful on the network's part.[4] The cast reunited in a stage play based on the sitcom. In the 1996 series finale of The Fresh Prince of Bel-Air, the Jeffersons made a guest appearance and bought the house from the Banks family. In an episode of Tyler Perry's House of Payne in 2011, Sherman Hemsley and Marla Gibbs reprised their roles of George Jefferson and Florence Johnston.

In 1985, Sherman Hemsley and Isabel Sanford made a special guest appearance as the Jeffersons in the Canale 5 comedy show Grand Hotel, starring the Italian actors Paolo Villaggio, Franco & Ciccio comic duo and Carmen Russo. They were guests in the fictional hotel, and appeared just twice during the show, for a total of five minutes. Their voices were dubbed by the Italian actors Enzo Garinei (George) and Isa di Marzio (Louise), who also dubbed their characters for the full series.[5]

Louise Jefferson, played by Isabel Sanford, first appeared in the All in the Family episode "Lionel Moves Into the Neighborhood", which was broadcast on March 2, 1971. The episode, the eighth of the series, centers on Louise, her son Lionel, and her husband George's moving into Archie and Edith Bunker's working-class section of Queens. Lionel, played by Mike Evans, first appeared in "Meet the Bunkers", the premiere episode of All in the Family; George would not appear on the show until its fourth season.

Norman Lear created the character of George Jefferson specifically for Broadway veteran Sherman Hemsley. Lear originally intended for George to appear in the first season of series; however, Hemsley was starring in the Broadway musical Purlie at the time, and Lear decided to postpone introduction of the character until Hemsley was available. Lear created the character of Henry Jefferson, George's younger brother, and replaced George with Henry in the series's scripts until Purlie finished its run. Mel Stewart was cast as Henry. George was introduced in the episode "Henry's Farewell", and Hemsley and Stewart share their only scene together in its final minutes. The episode marked the final appearance of Henry.

George, Louise, and Lionel continued to appear on All in the Family until 1975, when the spin-off The Jeffersons, also created by Lear, premiered. The characters of Lionel's biracial fiancée, Jenny, and her family, all of whom first appeared in the 1974 All in the Family episode "Lionel's Engagement", were also written into the new series. However, the roles were all recast, with Berlinda Tolbert taking over the role of Jenny, veteran actor Franklin Cover playing her father Tom Willis, whose first name was changed from Louis, as it was in their first AITF appearance, and Roxie Roker as her mother Helen. Zara Cully, who portrayed George's mother in one episode of All in the Family, resumed her role on The Jeffersons. 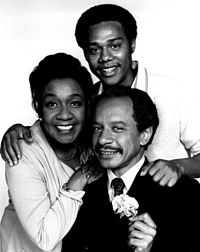 During the January 11, 1975 episode of All in the Family, titled "The Jeffersons Move Up", Edith Bunker gave a tearful good-bye to her neighbor Louise Jefferson, as her husband George, their son Lionel, and she moved from a working-class section of Queens, New York into a luxury apartment in Manhattan. The Jeffersons premiered the following week, January 18, 1975, and 253 episodes were produced and aired during its 11-year run.

George's career as a dry-cleaner began in the first season of All in the Family, in the episode "Oh, My Aching Back" (though the character himself did not appear on-camera). After his car was rear-ended by a bus, he filed a civil action and won enough to open his first store. At the beginning of The Jeffersons, he was operating five stores throughout New York City, with another two opening during the following seasons. Louise made friends with Tom and Helen Willis, an interracial couple with two adult children of their own (whom George insultingly called "zebras"): son Allan (played by Andrew Rubin in the first season finale, and by Jay Hammer throughout season 5), a zealous college drop-out who abandoned the family, passed as Caucasian and lived in Paris for two years; and daughter Jenny, an aspiring fashion designer. Jenny and Lionel became a couple, were married on December 24, 1976, and later became the parents of a daughter, Jessica (played in later seasons by Ebonie Smith).[6] Lionel and Jenny experienced marital issues, and divorced in the winter of 1985.

Paul Benedict arrived as Harry Bentley, a loyal, kind, handsome, friendly yet somewhat dimwitted British next-door neighbor, who worked as a Russian-language interpreter at the United Nations. A common sight-gag of the show was George slamming the door in Bentley's face mid-conversation. Bentley also had a bad back, and frequently enlisted George to walk on his back, since he was the same weight as a Japanese woman who had treated his back in that manner. He also became known for addressing the Jeffersons as "Mr. J" and "Mrs. J".

The series also stars Zara Cully as Olivia "Mother" Jefferson, who constantly disparaged Louise as not being a good wife. Cully, who had first appeared in the 1974 All in the Family episode, "Lionel's Engagement", reprised her role. She appeared regularly in the first two seasons, but made sporadic appearances over the next two years and was written out in the fifth season (Cully died in 1978, from lung cancer; no episode was centered on Mother Jefferson's death, but it was mentioned that she had died in season 5).

Ned Wertimer played the doorman, Ralph Hart, throughout the series. Another character, often spoken about but rarely seen, was Mr. Whittendale, the building owner, played by Jack Fletcher. 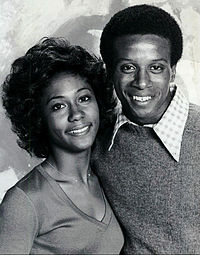 Berlinda Tolbert and Damon Evans as Jenny and Lionel (1976)

Mike Evans ("Lionel") left the show after the first season; his replacement was Damon Evans (no relation), who took over the role until part way through the fourth season. Damon Evans's last episode was "Lionel Gets the Business".

Mike Evans and Tolbert returned in the 1979–1980 season, with Tolbert's character, Jenny, being pregnant with a daughter named Jessica. However, Mike Evans appeared for only one more season, along with Tolbert. The Jeffersons's sixth season peaked at #8 in the summer of 1980.

In the spring of 1981, Paul Benedict left the show for a season and a half, returning in the final two seasons of the series. However, the ratings sank below the top 30, and The Jeffersons aired its last episode, "Red Robins", on July 2, 1985.

The Jeffersons had many two-part episodes, either over two consecutive weeks, or aired as an hour-long episode. 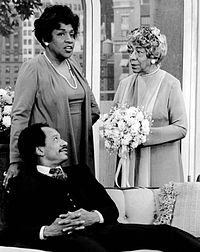 George and Louise with Mother Jefferson (1976)

The Jeffersons changed time slots at least 15 different times during its 11-year run, unusual for a popular long running series. The most common time slot was on Sunday night.[7]

Ja'net Dubois (from Good Times) and Jeff Barry co-wrote The Jeffersons's theme song, "Movin' on Up", which was sung by Dubois with a gospel choir. The song was covered by Sammy Davis, Jr. in 1978.

"Movin' on Up" found new life in the 1990s and 2000s in a number of television commercials and other references: for example, in Nelly's 2001 song "Batter Up" (which featured Hemsley as a baseball stadium public address announcer; Hemsley also performs his signature George Jefferson dance in the video) and in Will Smith's song "Gettin' Jiggy wit It" (Give to me now nice and easy/Since I moved up like George and Weezie).

The song was also used in the 2006 film Garfield: A Tail of Two Kitties. This time, the song was sung by Bill Murray who voices Garfield who joyfully sings about his new life in the palace. This version has different lyrics relating to Garfield's new life. The song is also referenced in the 2008 comedy Tropic Thunder and partially quoted in the animated children's comedy Phineas and Ferb: Across the Second Dimension.

In 2013, Beyoncé performed the song during her Mrs. Carter Show World Tour.

The rap group People Under the Stairs sampled the theme in their song "The Next Step II".

In its first season (1974–75), the show ranked at number four, surpassed by its parent series All in the Family (which landed at number one for the fifth year in a row). The show's ratings for the following two seasons placed it in the Top 30, but during the 1977–78 and 1978–79 seasons (the show's fourth and fifth seasons), it fell out of the top 30.

It returned to the Top 10 in 1979–80, and at the end of the 1981–82 season, The Jeffersons finished third overall, only surpassed by fellow CBS series Dallas and 60 Minutes. As a result, the series remained among the Top 20 for the next two seasons.

NOTE: The highest average rating for the series is in bold text.

Main article: List of awards and nominations received by The Jeffersons 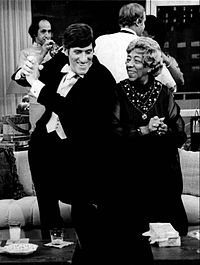 Actors on The Jeffersons received 13 Emmy Award nominations during its time on the air. Marla Gibbs was nominated for Best Supporting Actress in a Comedy Series each year from 1981 through 1985. Sherman Hemsley was nominated for Best Actor in 1984. Isabel Sanford was nominated for seven consecutive Best Actress Emmys, from 1979 until 1985. Her victory in 1981 made her the second African-American actress to win an Emmy Award; Gail Fisher, who played Peggy on the TV show Mannix, preceded her in 1970. Sanford was also the recipient of the five Golden Globe Awards nominations the program also received.

Sony Pictures Home Entertainment released the first six Seasons of The Jeffersons on DVD in Region 1 between 2002 and 2007. These releases have been discontinued and are now out of print.

On August 27, 2013, it was announced that Mill Creek Entertainment had acquired the rights to various television series from the Sony Pictures library including The Jeffersons.[8] They subsequently re-released the first two seasons on DVD on May 20, 2014.[9]

On August 8, 2014, it was announced that Shout! Factory had acquired the rights to the series; they subsequently released the complete series on DVD in a 33-disc collection on December 9, 2014.[10][11]