From Infogalactic: the planetary knowledge core
Jump to: navigation, search
Not to be confused with Westminster Gazette or Oxford University Gazette. 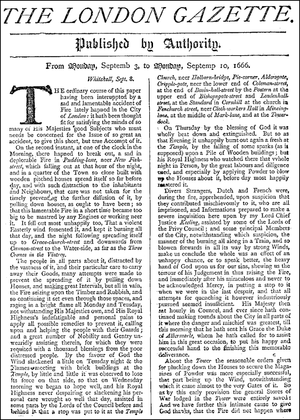 The London Gazette: later reprint of the front page from 3–10 September 1666, reporting on the Great Fire of London.

The London Gazette is one of the official journals of record of the British government, and the most important among such official journals in the United Kingdom, in which certain statutory notices are required to be published. The London Gazette claims to be the oldest surviving English newspaper and the oldest continuously published newspaper in the UK, having been first published on 7 November 1665 (Old Style) as The Oxford Gazette.[1] This claim is also made by the Stamford Mercury and Berrow's Worcester Journal, because the Gazette is not a conventional newspaper offering general news coverage. It does not have a large circulation.

Other official newspapers of the UK government are the Edinburgh and Belfast Gazettes, which, apart from reproducing certain materials of nationwide interest published in The London Gazette, also contain publications specific to Scotland and Northern Ireland, respectively.

In turn, The London Gazette carries not only notices of UK-wide interest, but also those relating specifically to entities or people in England and Wales. However, certain notices that are only of specific interest to Scotland or Northern Ireland are also required to be published in The London Gazette.

The London, Edinburgh and Belfast Gazettes are published by TSO on behalf of Her Majesty's Stationery Office. They are subject to Crown Copyright.

The London Gazette is published each weekday, except for Bank Holidays. Notices for the following, among others, are published:

Her Majesty's Stationery Office has digitised all issues of the Gazette, and these are available online.[2]

The official Gazettes are published by The Stationery Office. The content, apart from insolvency notices, is available in a number of machine-readable formats, including XML (delivery by email/FTP) and XML/RDFa via Atom feed.[3] 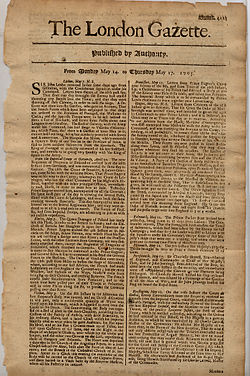 The London Gazette, dated 14–17 May 1705 detailing the return of John Leake from Gibraltar after the Battle of Cabrita Point.

The London Gazette was first published as The Oxford Gazette on 7 November 1665. Charles II and the Royal Court had moved to Oxford to escape the Great Plague of London, and courtiers were unwilling to touch, let alone hold to read, London newspapers for fear of contagion. The Gazette was "Published by Authority" by Henry Muddiman, and its first publication is noted by Samuel Pepys in his diary. The King returned to London as the plague dissipated, and the Gazette moved too, with the first issue of The London Gazette (labelled No. 24) being published on 5 February 1666.[4] The Gazette was not a newspaper in the modern sense: it was sent by post to subscribers, not printed for sale to the general public.

In 1812 an officer of The London Gazette named George Reynell established the first advertising agency.[citation needed]

The phrase "gazetted fortune hunter" is also probably derived from this. Notices of engagement and marriage were also formerly published in the Gazette.

Gazettes, modelled on The London Gazette, were issued for most British colonial possessions.