The Love Suicides at Sonezaki 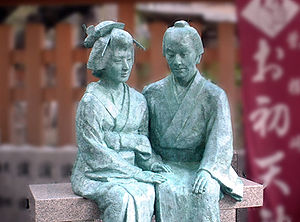 The Love Suicides at Sonezaki (曾根崎心中, Sonezaki Shinjū?) is a love-suicide Bunraku play by Chikamatsu Monzaemon. While not his first one (which was probably the puppet play The Soga Successors in 1683) nor his most popular (which would be The Battles of Coxinga), it is probably the most popular of his "domestic tragedies" or "domestic plays" (sewamono) as Donald Keene characterizes the non-historical plays.

It was first performed 20 June 1703. It was revived in 1717, with additional scenes added by Chikamatsu, such as the punishment of the villain, but the version typically translated and performed is the 1703 version.

The Love Suicides at Sonezaki is a short play in three scenes, staged over a day and a night. The two central characters are a young orphan merchant clerk named Tokubei (whose firm deals in oil or possibly soy) and the courtesan with whom he is in love, Ohatsu.

In the first scene, Tokubei and an apprentice to their "firm of Hirano in Uchihon Street" are making the rounds of the firm's customers, delivering their wares and collecting on the bills, when, on the grounds of the Ikutama Shrine (in Osaka), Tokubei encounters his beloved Ohatsu, who berates him for his coldness in not visiting or writing her for some time now, and also for not confiding in her troubles.

Moved by her plea, Tokubei tells her everything. The owner of the firm is Tokubei's uncle. Tokubei's scrupulously honest and steady performance has impressed him; he wants Tokubei to marry his wife's niece. Because Tokubei loves Ohatsu, he had tried to politely refuse. The uncle did not relent but continued to try to convince Tokubei to agree to the match. He proposed the match to Tokubei's stepmother, who must assent; she immediately agreed and returned to her home village – taking with her the lavish dowry the uncle provided, some two kamme (a unit of measure for silver. Two kamme would be a significant amount; writing in the 1960s, Donald Keene stated that two kamme would then be equivalent to $1000).

This agreement remains wholly unknown to Tokubei until his uncle tries to force him into the marriage. Tokubei makes his refusal categorical and absolute this time. The uncle is infuriated. He fires Tokubei from the firm, demands the return of the two kamme which Tokubei does not have, and says he will exile Tokubei from Osaka.

Tokubei goes to his village and eventually with the villagers' aid, forces the silver out of his stepmother and returns to Osaka.

On his return, Tokubei is collared by his close friend of many years, "Kuheiji the oil merchant", who tells Tokubei that he desperately needs a loan of two kamme or else he will not be able to meet his monthly bills and will go bankrupt.

Since Tokubei is so kind-hearted and does not actually need to return the two kamme until several days after Kuheiji promises to return the money, he loans it to Kuheiji.

Here Tokubei finishes recounting the events that have taken place before the start of the play. Just as he finishes, none other than the very Kuheiji he was speaking of enters the temple grounds at the head of a band of revelers and rowdies. Tokubei seizes the chance to ask Kuheiji to repay the now-overdue loan.

Tokubei realizes that he has been perfectly swindled and attacks Kuheiji. He is trounced and beaten by Kuheiji and his followers.

While Tokubei is recovering from his beating and returning dejectedly to Ohatsu's place of employment, the Temma House, Kuheiji is headed there to boast of his new wealth and successful scam, after having been busy spreading the story that Tokubei had tried to extort money from Kuheiji.

Ohatsu has no sooner hidden Tokubei under her robes than Kuheiji and some friends arrogantly stride in. While Kuheiji boasts of how Tokubei is sure to be executed or exiled and how he will then possess Ohatsu for himself, Ohatsu and Tokubei communicate through their hands and feet. They resolve to die within the day together.

Scene two ends with them sneaking past the sleeping servant guarding the exit.

Scene three begins with a long and poetic dialogue between the two lovers (into which the narrator injects the occasional lamenting comment). The two travel to the "Wood of Tenjin" (Tenjin being Sugawara no Michizane), and by an unusual tree in the Shonezaki shrine which has both a pine and palm tree growing out of the same trunk (this tree has since died), decide that this is the place they will do the grim deed.

Tokubei binds Ohatsu to the tree. So dreadful is the deed that his first stabs with the razor all go awry, but one blow strikes home in Ohatsu's throat, and she slowly begins dying. But before she does, Tokubei thrusts the razor into his own throat and the two die together.