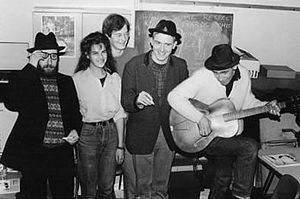 The Medway Poets were founded in Medway, North Kent, in 1979. They were an English punk based poetry performance group and later formed the core of the first Stuckists Art Group. The members were Miriam Carney, Billy Childish, Rob Earl, Bill Lewis, Sexton Ming and Charles Thomson (and briefly initially Alan Denman). Others associated with the group include Philip Absolon, Sanchia Lewis and Tracey Emin. Most members also practiced other art forms including music and painting.

The origin of The Medway Poets was a series of readings called "Outcrowd" staged by (Bill) Lewis and Earl from 1975 on the bank of the River Medway in Maidstone, Kent, in the Lamb Pub, later called Drake's Crab and Oyster House. These led on to readings promoted by a Medway College tutor, Alan Denman, in the York Pub in Chatham, which brought The Medway Poets together, inspired by a fusion of the then-new punk movement and a historical reference to Berlin cabaret. Lewis named the group.[1]

Alan Denman was briefly a member, but the group stabilised to Miriam Carney, Billy Childish, Rob Earl, Bill Lewis, Sexton Ming and Charles Thomson. Others who read with the group included Philip Absolon and Sanchia Lewis (no relation to Bill Lewis).

The Medway Poets' appearances included pubs and colleges, sometimes with punk groups,[2] as well as the Kent Literature Festival and the 1981 international Cambridge Poetry Festival. There were, however, personality clashes within The Medway Poets, particularly between Childish and Thomson, who said, "There was friction between us, especially when he started heckling my poetry reading and I threatened to ban him from a forthcoming TV documentary." [3] However, a TV South documentary on the group in 1982 brought them to a wider regional audience.

According to Billy Childish:

Me & Charles were at war from 1979 until 1999. He even threatened having bouncers on the doors of Medway Poet’s readings to keep me out. There were two camps in the Medway Poets from day one - me & Sexton versus everyone else. Bill came down on our side in the end. Rob Earl would have been with me & Sexton, but he wasn’t on the scene so much.[4]

Thomson has also said this period was "an incredibly pressured and creative time and established the basis on which we are still working." [5] He described the performances:

After the TV South programme, reunions were increasingly intermittent. An LP The Medway Poets was released on Hangman Records in 1988 with guest readers including Tracey Emin and Vic Templar. There was virtually no group activity during the early 1990s. In 1998, Lewis, Childish and Thomson discussed by phone a possible Medway Poets anthology. On January 28, 1999, Thomson suggested to Childish that they relaunch the group with an art agenda as the Stuckists, a name which Thomson had derived from a Childish poem, which quoted Emin's insult that Childish was "Stuck! Stuck! Stuck!" for his pursuit of painting, as well as his style of music and poetry. Bill and Sanchia Lewis (no relation), Ming and Absolon were also founder members.[2]

The original group name still appeared occasionally, and in 2000, it was advertised on Ming's website that "Sexton and 3 other Medway Poets will be reading at the next Stuckism Show" on 20 May at the Metropole Arts Centre in Folkestone, Kent.[7]

The members of The Medway Poets published their work and that of others prolifically with imprints such as Victoria Press, Phyroid Press, Lazerwolf, Hangman and Cheapo. The early publications of the group were mostly xeroxed and stapled publications, and are now sought after. The Power House And Other Plays by Sexton Ming (The Phyroid Press, Chatham, 1980) is now selling for £50 as "First Edition. Very scarce and early piece from one of the founding members ... A near fine in stapled wrappers." [8]

Tracey Emin was a local art student and became associated with the group through her then-boyfriend, Childish. In 1995 in an interview in the Minky Manky show catalogue by Carl Freedman, when asked, "Which person do you think has had the greatest influence on your life?" She replied, "Uhmm... It's not a person really. It was more a time, going to Maidstone College of Art, hanging around with Billy Childish, living by the River Medway."

She took part in some of the later poetry performances. On one such occasion at the Gravesend Adult Education Centre (Victoria Centre) she walked onto the stage in a mac. After a period of indecision, she removed it to reveal a pink basque and stockings, and read out poems by Childish, who in the meantime had fled from the room.[2]

Her first book of writing was "'edited' into reasonable shape" by (Bill) Lewis, printed by Thomson and published by Childish as Six Turkish Tales (Hangman 1987).[1]