An ancient Egyptian priest called Imhotep (Boris Karloff) is revived when an archaeological expedition in 1921, led by Sir Joseph Whemple (Arthur Byron), finds Imhotep's mummy. Imhotep had been mummified alive for attempting to resurrect his forbidden lover, the princess Ankh-es-en-amon. Whemple's friend, Dr. Muller (Edward Van Sloan) inspects the mummy and exclaims "The viscera were not removed. The usual scar made by the embalmers knife is not there." Sir Joseph Wimple responds, "I guessed as much." Muller then deduces that Imhotep was buried alive for sacrilege. Despite Muller's warning, Sir Joseph's assistant Ralph Norton (Bramwell Fletcher) reads aloud an ancient life-giving scroll – the Scroll of Thoth. Imhotep escapes from the archaeologists, taking the Scroll of Thoth, and prowls Cairo seeking the modern reincarnation of Ankh-es-en-amon.

10 years later, Imhotep is masquerading as a modern Egyptian named Ardath Bey. He calls upon Sir Joseph's son Frank (David Manners) and Prof. Pearson (Leonard Mudie). He shows them where to dig to find Ankh-es-en-amon's tomb. The archaeologists find the tomb, give the mummy and the treasures to the Cairo Museum, and thank Ardath Bey for the information.

Imhotep encounters Helen Grosvenor (Zita Johann), a woman bearing a striking resemblance to the Princess. Believing her to be Ankh-es-en-amon's reincarnation, he attempts to kill her, with the intention of mummifying her, resurrecting her, and making her his bride. She is saved when she remembers her past life and prays to the goddess Isis to save her. The statue of Isis raises its arm and emits a beam of light that destroys the Scroll of Thoth, thereby reducing Imhotep to dust. At the urge of Dr. Muller, Frank calls Helen back to the world of the living while the Scroll of Thoth burns. 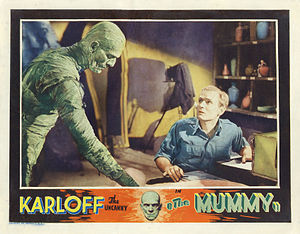 Film poster with text: "Karloff the uncanny in The Mummy"

Inspired by the opening of Tutankhamun's tomb in 1922 and the Curse of the Pharaohs, producer Carl Laemmle Jr. commissioned story editor Richard Shayer to find a literary novel to form a basis for an Egyptian-themed horror film, just as Dracula and Frankenstein informed their previous hits. Shayer found none although the plot bears a strong resemblance to a short story by Arthur Conan Doyle entitled "The Ring of Thoth". Shayer and writer Nina Wilcox Putnam learned about Alessandro Cagliostro and wrote a nine-page treatment entitled Cagliostro. The story, set in San Francisco, was about a 3000-year-old magician who survives by injecting nitrates instead of via supernatural cause like with Imhotep's case. Laemmle was pleased with these ideas, and he hired John L. Balderston to write the script. Balderston had contributed to Dracula and Frankenstein, and had covered the opening of Tutankhamen's tomb for New York World when he was a journalist so he was more than familiar with the highly popular tomb unearthing. Balderston moved the story to Egypt and renamed the film and its title character Imhotep, after the historical architect.[2] He also changed the story from one of revenge upon all the women who resembled the main characters' ex-lover to one where the main character is determined to revive his old love by killing and mummifying her reincarnated self before resurrecting her with the spell of the Scroll of Thoth.[3] Balderston invented the Scroll of Thoth, which gave an aura of authenticity to the story. Thoth was the wisest of the Egyptian gods who, when Osiris died, helped Isis bring her love back from the dead. Thoth is believed to have authored The Book of the Dead, which was no doubt the inspiration for Balderston's Scroll of Thoth.

Karl Freund, the cinematographer on Dracula, was hired to direct, making this his first film in the United States as a director.[4] The film was retitled The Mummy. He cast Zita Johann, who believed in reincarnation, he also named her character 'Ankh-es-en-Amon' after the only wife of Pharaoh Tutankhamun. The real Ankhesenamon's body had not been discovered in the tomb of King Tut and her resting place was unknown, her name however would not have been unknown to the general public and no doubt drew people's attention in the post Tutankhamoun era. Filming was scheduled for three weeks. Karloff's first day was spent shooting the Mummy's awakening from his sarcophagus. Make-up artist Jack Pierce had studied photos of Seti I's mummy to design Imhotep; however, Karloff looked nothing like the mummy of Seti I in the film, instead bearing a resemblance to the mummy of Ramesses III. Pierce began transforming Karloff at 11 a.m., applying cotton, collodion and spirit gum to his face; clay to his hair; and wrapping him in linen bandages treated with acid and burnt in an oven, finishing the job at 7 p.m. Karloff finished his scenes at 2 a.m., and another two hours were spent removing the make-up. Karloff found the removal of gum from his face painful, and overall found the day "the most trying ordeal I [had] ever endured".[2] Although the images of Karloff wrapped in bandages are the most iconic taken from the film, Karloff only appears on screen in this make-up for a few minutes; the rest of the film sees him wearing less elaborate make-up.

A lengthy and detailed flashback sequence was shot, but cut from the completed film. This sequence showed the various forms Anck-es-en-Amon was reincarnated in over the centuries. Stills exist of the flashbacks, but the footage has been lost. It was shot in Cantil, California, Universal City, and the Mojave Desert.[citation needed]

The film was a success at the box office, particularly in England.[1] Unlike Frankenstein and Dracula, and other, later Universal horror films, this film had no sequels, but rather was semi-remade in the 1940s B-film The Mummy's Hand (1940), and its sequels, The Mummy's Tomb (1942), The Mummy's Ghost (1944), The Mummy's Curse (1944), which were later spoofed in 1955's Abbott and Costello Meet the Mummy. These focus on the mummy Kharis. The Mummy's Hand recycled footage from the original film for use in the telling of Kharis' origins; Karloff is clearly visible in several of these recycled scenes, but he is not credited.

The 1999 Universal film The Mummy also suggests that it is a remake of the 1932 movie, and may be considered as such in that its titular character is Imhotep, resurrected from the dead by the Book of the Dead, and out to find the present-day embodiment of the soul of his beloved Anck-su-namun, and features an Egyptian named Ardeth Bay (in this case, a guard of the city and of Imhotep's tomb), but develops there from a different story line, in common with most postmodern remakes of classic horror and science-fiction films. It spawned a sequel in 2001, The Mummy Returns, and a prequel spin-off of that sequel, The Scorpion King, in 2002, which in turn spawned a 2008 prequel, The Scorpion King 2: Rise of a Warrior, and a 2012 sequel, The Scorpion King 3: Battle for Redemption. A second sequel, The Mummy: Tomb of the Dragon Emperor, was released in 2008. Also a short-lived animated series simply titled The Mummy ran from 2001 to 2003.

Universal has announced another forthcoming remake of the film.[5] The new remake is tentatively scheduled for a March 2017 release. The new film will be directed by Alex Kurtzman. In October 2015 Kurtzman hinted that the new reboot could possibly feature a female lead as the mummy character which would be the first for the film franchise. Universal's The Mummy is planned as the first film in a series of interconnected monster films as Universal plans to build a franchise out of its vault of classic movies.[6]

Like other movies that take place in modern Egypt, there has been a decrying of the "othering" of Eastern culture.[7] Even though it takes place in Egypt, the characters of the film are battling for distinctly American values. The meeting of East and West can be seen as a battlefield of Egyptian superstition versus the West's science and clarity of thought.

In the 1932 version of The Mummy, archeologist Sir Joseph Whemple states: ‘‘much more is learned from studying bits of broken pottery than from all the sensational finds. Our job is to increase the sum of human knowledge of the past.’ (Hall 161).[8] The importance of archeology is to understand the past versus finding the latest artifact and to forget about its history. Egyptian movies tend to allow viewers to gain cultural knowledge of another country in an incorrect manner, "what these mummy films retain is a depiction of archaeology as a colonial imposition by which cultural inheritance is appropriated" (Hall 161).[8] Hall states, films typically deal with the past if it relates to legend and superstition. An example that he presents is The Mummy (1999) in which the archaeological curator of the Cairo Antiquities Museum leads a secret sect – descended from the bodyguard of Seti– pledged to defend the world from Imhotep (the Mummy)” (Hall 161).[8] In The Mummy Returns, "one of the henchmen of Imhotep is the curator of Egyptian antiquities at the British Museum. Both these curators are depicted as Egyptians engaged in arcane activities, confirming their subservience to the western, colonial myth about Egypt and suggesting that only Europeans / Americans can truly understand the Egyptian past, through its appropriation and redefinition, often through the practice of archaeology (Hall 161).[8]

Conspirators were caught in a plot to assassinate Pharaoh Ramesses III around 1151 BCE.[10] Papyrus trial transcripts reveal the method of execution, which may have been being buried alive. Although not common practice, it is possible that a fictional priest such as Imhotep would be punished this way.[11]

There is no evidence to suggest that Ancient Egyptians believed in or considered the possibility of re-animated mummies. Mummification was a sacred process meant to prepare a dead body to carry the soul through the afterlife, not for being reincarnated and living again on earth. While it is possible that some individuals were mummified by being buried alive it is unlikely that ancient Egyptians would think resurrection was possible because they were very aware of the fact that all the necessary organs had been removed and the body would be of little use on earth anymore.[3]