The Necessity of Atheism 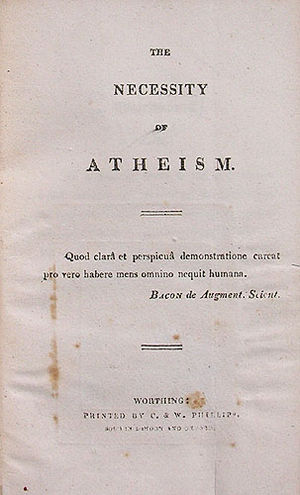 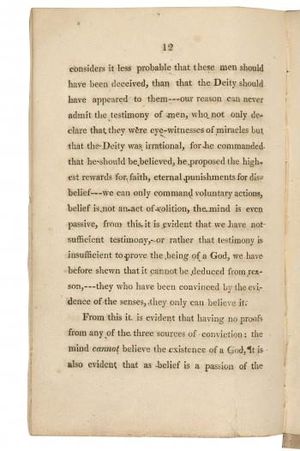 "The Necessity of Atheism" is an essay on atheism by the English poet Percy Bysshe Shelley, printed in 1811 by C. and W. Phillips in Worthing while Shelley was a student at University College, Oxford. A copy of the first version was sent as a short tract signed enigmatically to all heads of Oxford colleges at the University. At that time the content was so shocking to the authorities that he was rusticated for contumacy in his refusing to deny authorship, together with his friend and fellow student, Thomas Jefferson Hogg. A revised and expanded version was printed in 1813.[1]

The tract starts with the following rationale of the author's goals:

"As a love of truth is the only motive which actuates the Author of this little tract, he earnestly entreats that those of his readers who may discover any deficiency in his reasoning, or may be in possession of proofs which his mind could never obtain, would offer them, together with their objections to the Public, as briefly, as methodically, as plainly as he has taken the liberty of doing."

Shelley made a number of claims in Necessity, including that one's beliefs are involuntary, and, therefore, that atheists do not choose to be so and should not be persecuted. Towards the end of the pamphlet he writes: "the mind cannot believe in the existence of a God."[2] Shelley signed the pamphlet, Thro' deficiency of proof, AN ATHEIST,[2] which gives an idea of the empiricist nature of Shelley's beliefs. According to Berman, Shelley also believed himself to have "refuted all the possible types of arguments for God's existence,"[3] but Shelley himself encouraged readers to offer proofs if they possess them.

Opinion is divided upon the characterisation of Shelley's beliefs, as presented in Necessity. Shelley scholar Carlos Baker states that "the title of his college pamphlet should have been The Necessity of Agnosticism rather than The Necessity of Atheism,"[4] while historian David Berman argues that Shelley was an atheist, both because he characterised himself as such, and because "he denies the existence of God in both published works and private letters"[3] during the same period. At the very beginning of his essay, Shelley qualifies his definition of atheism:

"There Is No God. This negation must be understood solely to affect a creative Deity. The hypothesis of a pervading Spirit co-eternal with the universe remains unshaken."

Taken together with his quotation of the Dutch pantheist Benedict Spinoza later in the essay, this suggests that at the very least Shelley considered some form of pantheism to remain within the realm of intellectual respectability[clarification needed]. The essay does not, however, provide any further indication of whether Shelley himself shared such views.