The Pitt News is an independent, student-written and student-managed newspaper for the main campus of the University of Pittsburgh in Oakland which has been active in some form since 1910. It is published Monday through Friday during the regular school year and Wednesdays during the summer. According to an independent survey, more than 90% of Pitt students read The Pitt News each day.[1]

According to the constitution of The Pitt News, the organization's purpose is "to prepare and publish a high-quality newspaper, to provide experience for its members in all facets of the journalism profession, to provide a voice for the students of the university, and to provide a public forum for the university community."

The Pitt News is a million-dollar non-profit operation, employing more than 100 undergraduate editors, roughly 25 students in the business division, and five professional staff members. The paper includes five regular sections: News, Opinions, Arts & Entertainment, Sports, and Classifieds. It also produces about a dozen special issues a year, such as the Dining, Employment and Rental guides. During the school year, circulation includes 13,000 copies an issue, distributed at approximately 100 sites. During the summer, the paper is published weekly each Wednesday with a circulation of 10,000.[2] Currently, The Pitt News is printed by the Butler Color Press on tabloid-sized newsprint.

Overseeing The Pitt News is the Pitt News Advisory Board, which serves as publisher, and, according to its constitution, works to "advise students, support the freedom of the student press and further the educational mission of The Pitt News." The Board consists of the editor in chief, the business manager, two other Pitt News employees, at least one non-Pitt News student at the University, local journalists, University journalism and business professors, and area businesspeople. 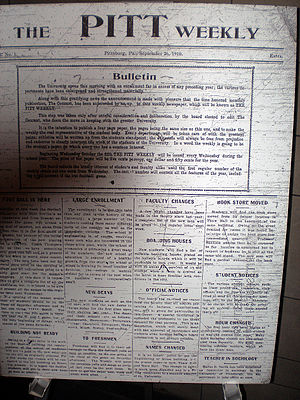 A display of a copy of the first edition of The Pitt News, then called The Pitt Weekly and published on September 26, 1910, was on display during homecoming festivities in 2010 in celebration of the newspaper's 100th year of publication

Started in the late 19th century as a quarterly literary magazine, The Courant is the earliest traceable ancestor of The Pitt News. By 1910, it had morphed into a weekly student newspaper called The Pitt Weekly, which premiered on September 26 of that year.[3] Gradually, the paper began adding days to its production schedule. By the 1970s it was a business daily (Mon-Fri) paper. The Pitt News has remained an editorially independent, student-run newspaper - funded by a student-run business staff which provides revenue for the paper via ad sales.

In 2004 The Pitt News, in the Third U.S. Circuit Court of appeals, overthrew PA Act: 199, which previously prevented Pennsylvania college newspapers from running advertisements making any mention of alcohol.[4][5] The ACLU represented The Pitt News against the Pennsylvania Liquor Control Board. The opinion was written by now Supreme Court Justice Samuel Alito.