The Playboy of the Western World

The Playboy of the Western World is a three-act play written by Irish playwright John Millington Synge and first performed at the Abbey Theatre, Dublin, on 26 January 1907.[1] It is set in Michael James Flaherty's public house in County Mayo (on the west coast of Ireland) during the early 1900s. It tells the story of Christy Mahon, a young man running away from his farm, claiming he killed his father. The locals are more interested in vicariously enjoying his story than in condemning the immorality of his murderous deed, and in fact, Christy's tale captures the romantic attention of the bar-maid Pegeen Mike, the daughter of Flaherty. The play is best known for its use of the poetic, evocative language of Hiberno-English, heavily influenced by the Irish language, as Synge celebrates the lyrical speech of the peasant Irish.

Characters in the play 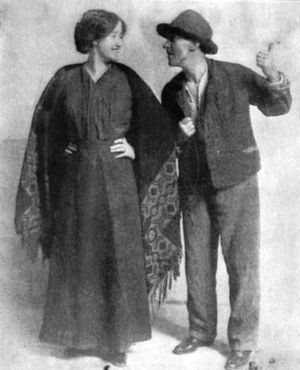 On the west coast of County Mayo[2] Christy Mahon stumbles into Flaherty's tavern. There he claims that he is on the run because he killed his own father by driving a loy into his head. Flaherty praises Christy for his boldness, and Flaherty's daughter (and the barmaid), Pegeen, falls in love with Christy, to the dismay of her betrothed, Shawn Keogh. Because of the novelty of Christy's exploits and the skill with which he tells his own story, he becomes something of a town hero. Many other women also become attracted to him, including the Widow Quin, who tries unsuccessfully to seduce Christy at Shawn's behest. Christy also impresses the village women by his victory in a donkey race, using the slowest beast.

Eventually Christy's father, Mahon, who was only wounded, tracks him to the tavern. When the townsfolk realize that Christy's father is alive, everyone, including Pegeen, shuns him as a liar and a coward. To regain Pegeen's love and the respect of the town, Christy attacks his father a second time. This time it seems that Old Mahon really is dead, but instead of praising Christy, the townspeople, led by Pegeen, bind and prepare to hang him to avoid being implicated as accessories to his crime. Christy's life is saved when his father, beaten and bloodied, crawls back onto the scene, having improbably survived his son's second attack. As Christy and his father leave to wander the world, Shawn suggests he and Pegeen get married soon, but she spurns him. Pegeen laments betraying and losing Christy: "I've lost the only playboy of the western world."

The Playboy Riots occurred in January 1907 during and following the opening performance of the play. The riots were stirred up by Irish nationalists who viewed the contents of the play as an offence to public morals and an insult against Ireland. The riots took place in Dublin, spreading out from the Abbey Theatre and finally being quelled by the actions of the Dublin Metropolitan Police.

The fact that the play was based on a story of apparent patricide also attracted a hostile public reaction. Egged on by nationalists, including Sinn Féin leader Arthur Griffith, who believed that the theatre was not sufficiently political and described the play as "a vile and inhuman story told in the foulest language we have ever listened to from a public platform", and with the pretext of a perceived slight on the virtue of Irish womanhood in the line "a drift of females standing in their shifts" (a shift being a female undergarment), a significant portion of the crowd rioted, causing the remainder of the play to be acted out in dumb show. Nevertheless, press opinion soon turned against the rioters and the protests petered out.

Years later, W. B. Yeats famously declared to rioters against Seán O'Casey's pacifist drama The Plough and the Stars, in reference to the "Playboy Riots": "You have disgraced yourself again, is this to be the recurring celebration of the arrival of Irish genius?".

In the 1965 film Young Cassidy, a riot occurs during a play by the fictitious playwright Cassidy, following which the character W.B. Yeats refers to Synge and speaks similar words, starting with "You have disgraced yourselves again."

The production of Synge's play met with more disturbances in the United States in 1911. On opening night in New York, hecklers booed, hissed and threw vegetables and stink bombs while men scuffled in the aisles. The company was later arrested in Philadelphia and charged with putting on an immoral performance. The charges were later dismissed.

In 1912 Sil-Vara and Charles H. Fisher translated it into German as Der Held (literally 'hero') des Westerlands[3] or Der Held der westlichen Welt and had it published by Georg Müller and performed at Max Reinhardt's Kammerspiele, Berlin, at the Neue Wiener Bühne in Vienna and at the Stadttheater in Münster.[4] In 1973 the Irish language national theatre group Taibhdhearc na Gaillimhe produced an adaptation in the Irish language by Seán Ó Carra entitled Buachaill Báire an Domhain Thiar. [5][6] The play was adapted in 1984 by Trinidadian playwright Mustapha Matura, lifted out of turn of the century Ireland and set down in 1950s Trinidad, and retitled Playboy of the West Indies. In September 2007 the play returned to the Abbey in a modern adaptation by Bisi Adigun and Roddy Doyle. Set in a suburb of West Dublin, it tells the story of Christopher Malomo, a Nigerian refugee who claims to have killed his father with a pestle. In 2011, The Old Vic in London, UK, played host to a classic adaptation directed by John Crowley starring Robert Sheehan, Niamh Cusack and Ruth Negga.[7]

In 1975 Giselher Klebe's operatic adaption Ein wahrer Held (A True Hero) premiered at the Zurich Opera House. A 2003 operatic rendition by Mark Alburger was produced from 23 to 26 August 2007 by GHP/SF Cabaret Opera at Oakland Metro Opera House, in Oakland, California. A musical theatre version, written by Kate Hancock and Richard B. Evans, premiered at the STAGES 2005 musical festival at the Theatre Building Chicago. In 2009, a musical adaptation entitled Golden Boy of the Blue Ridge premiered in New York City. With music by Peter Mills and a book by Peter Mills and Cara Reichel, the musical transplants the story to 1930s Appalachia and is set to a bluegrass-flavoured score.

A 1962 film version of the play was produced in Ireland, with the screenplay by writer-director Brian Desmond Hurst. It stars Siobhán McKenna as Pegeen, Gary Raymond as Christy, and Elspeth March as Widow Quin, with music by Seán Ó Riada.[8] A 1994 TV movie adaptation was entitled Paris or Somewhere. Set in rural Saskatchewan, it starred Callum Keith Rennie as Christy Mahon, a young American farmer who arrives in town and claims to have killed his father. He charms the town with his story, particularly Peg (Molly Parker), the daughter of a local store owner and bootlegger. The screenplay was written by novelist Lee Gowan. In 2006, a Mandarin Chinese version of the play set in a hairdressers shop in a Beijing suburb was performed at the Beijing Oriental Theatre. It was produced by the Irish contemporary theatre company, Pan Pan. The play attracted controversy when a member of the audience complained about the shortness of the skirt worn by Sha Sha, playing the Sarah Tansey character. Following the complaint, the play was attended by two policemen.[9]