The Pond and Hallett Nature Sanctuary 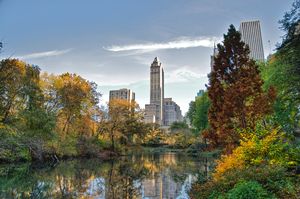 The Pond in early November, with Hallett Nature Sanctuary at left

The Pond and Hallett Nature Sanctuary occupy the low-lying southeast corner of New York City's Central Park, at the corner of Grand Army Plaza, across Central Park South from Plaza Hotel, and abutting Fifth Avenue. The Pond is one of seven natural-seeming bodies of water in the Park.[1]

Hallett Nature Sanctuary, the only permanently fenced-off section of Central Park aside from Jacqueline Kennedy Onassis Reservoir, occupies 3.5 acres (14,000 m2) of the wooded promontory that juts into The Pond. The area had been set apart by Robert Moses as a bird sanctuary in 1934, but decades of neglect were repaired in the 1980s; invasive alien plants like ailanthus and Far Eastern wisterias were extirpated,[2] and the equally invasive though native Black Cherry was thinned, the woodland was enriched with native shrubs, and the reserve was renamed the Hallett Nature Sanctuary in 1986, in honor of George Hervey Hallett, Jr (1895—1985), an ardent birdwatcher and naturalist and executive secretary of the Citizens Union.[3]

File:Pond cascade CP jeh.jpg
Water trickles down an artificial cascade into the pond

The Central Park Conservancy routinely offers half-hour tours; they avoid nesting season and the height of migratory season, because Central Park is a stopover on the Atlantic Flyway. The perimeter affords one of the prime bird watching areas of the Park.[4] Formerly, deadfalls remained where they lay, to provide for insects that feed birds. However, the experiment ended after an Asian longhorn beetle was discovered in 2002.[5] Another unexpected visitor in the Sanctuary was Hal the Central Park Coyote, who received his nickname from the Hallett Sanctuary and passed through briefly in March 2006.[6]

The simple fieldstone arch of Gapstow Bridge was built in 1896 to replace the original more ambitious but less rustic structure designed by Jacob Wrey Mould.[7] As originally laid out by Frederick Law Olmsted and Calvert Vaux, the Pond was considerably larger. A large piece of its upper reaches, beyond Gapstow Bridge, once spanning a narrow neck of water, was paved over to form the Wollman Memorial Skating Rink, opened in 1949. Nearby, on stone plinths, bronze busts commemorate the poet Thomas Moore and the composer Victor Herbert (by Edmond Thomas Quinn).

The Central Park Conservancy completed a reconstruction of the Pond in 2001, which included new shoreline and perimeter plantings, an island habitat for birds and turtles, and beyond Gapstow Bridge, a series of small pools and cascades.