The Queen's College is a constituent college of the University of Oxford, England. The college was founded in 1341 by Robert de Eglesfield (d'Eglesfield) in honour of Queen Philippa of Hainault (wife of King Edward III of England). The college is distinguished by its predominantly neoclassical architecture, which includes buildings designed by Sir Christopher Wren and Nicholas Hawksmoor.

In 2014, the college had an endowment of £206.1 million, making it the fifth wealthiest college (after St. John's, Christ Church, All Souls and Merton).[2]

Statue of Robert de Eglesfield in the Provost's garden

The college was founded during the 14th century by Robert de Eglesfield (d'Eglesfield), chaplain to Queen Philippa of Hainault (the wife of King Edward III of England); hence its name. The college's coat of arms is that of the founder; it differs slightly from his family's coat of arms, which did not include the gold star on the breast of the first eagle. The current coat of arms was adopted by d'Eglesfield because he was unable to use his family's arms, being the younger son.

The frontage of the college was designed by Nicholas Hawksmoor, part of a substantial rebuilding in the 18th century during which the library was built. The medieval foundations, however, remain beneath the current 18th-century structure. In 2012, the college had net assets of £201.4 million.[3]

The college has had a long association with the north of England, in part because of its founder; Eglesfield is a village in Cumberland. This connection was reinforced for many years until relatively recently by the large number of Hastings Scholarships given to men from 20 schools in Yorkshire, Westmorland and Cumberland. Graduate students from the universities of Bradford, Hull, Leeds, Sheffield, or York are still able to apply for Hastings Senior Scholarships.

The college is named for its first patroness, Queen Philippa of Hainault (1314–1369, the wife of King Edward III). Established in January 1341 'under the name of the Hall of the Queen's scholars of Oxford' (sub nomine aule scholarium Regine de Oxon), the college was subsequently called the 'Queen's Hall', 'Queenhall' and 'Queen's College'. An Act of 1585 sought to end this confusion by providing that it should be called by the one name 'the Queen's College';[4] in practice the definite article is usually omitted. The full name of the College, as indicated in its annual reports, is The Provost and Scholars of The Queen’s College in the University of Oxford.[5] Queens' College in Cambridge positions its apostrophe differently and has no article, as it was named for multiple Queens (Margaret of Anjou, the wife of King Henry VI, and Elizabeth Woodville, the wife of King Edward IV).

In April 2012, as part of the celebrations of the Diamond Jubilee of Elizabeth II, a series of commemorative stamps were released featuring A-Z pictures of famous British landmarks. The Queen's College's front quad was used on the Q stamp, alongside other landmarks such as the Angel of the North on A and the Old Bailey on O.[6] 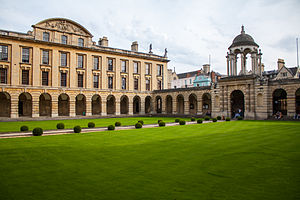 The main quad of Queen's

The college has one of the best-stocked college libraries in Oxford.[citation needed] The current lending library consists of around 50,000 volumes, though all items in the Upper Library are accessible upon request to the Librarian. The Upper Library has been a focal point for the College ever since its construction at the end of the 17th century. Unlike many other similar rooms in Oxford libraries, the Upper Library remains as a silent reading room for students open during staffed hours.[7] The open cloister below the Upper Library was enclosed in the 19th century to form the Lower Library, which now houses the bulk of the lending collection. The college has one of the largest (around 100,000 volumes) and most diverse collections of rare books in Oxford. 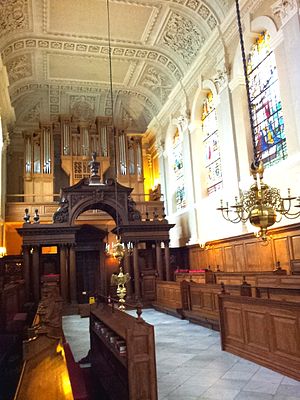 The Chapel of The Queen's College, Oxford. Looking west towards the Frobenius organ.

The chapel is noted for its Frobenius organ in the west gallery. It was installed in 1965, replacing a Rushworth and Dreaper organ from 1931. The earliest mention of an organ is 1826. The Chapel Choir has been described as "Oxford's finest mixed-voice choir" and continues to perform termly concerts, with recent examples including Handel's Messiah and Bach's St. John Passion.[8][9] The chapel has stood virtually unchanged since it was consecrated by the Archbishop of York in 1719.

Holy Communion is celebrated every Sunday morning and at other times and is open to all communicant members of any Christian church or denomination. The Sunday evening service takes the traditional form of Choral Evensong, which is also held on Wednesday and Friday evenings during term. Morning and evening prayer is said daily, and at other times some like to use the stillness for their own prayer. Baptisms, confirmations, and weddings are also conducted for members or former members of the College.

Queen's is one of very few colleges in Oxford to provide accommodation for all of its undergraduates, who are divided between the college's main buildings and other annexes nearby. These include the Florey Building in St Clement's, designed by James Stirling and named after former Queen's Provost and Nobel Prize winner Howard Florey, which houses most of the college's first years.[10] There are close to 80 rooms, of which those on the top floor have a mezzanine level where the students' beds are located. At one end of the building at ground level there is a common room and a breakfast room. The college also owns the Cardo Building opposite the Oxford University Sports centre on Iffley Road (where Roger Bannister ran the first ever four-minute mile in 1954). This building is home to a mixture of first, second and third years, as well as a common room, breakfast room and the college's two squash courts. Adjacent to college is the other main undergraduate annex, located just across Queen's Lane, called Carrodus Quad. It was completely refurbished and now has approximately 80 en suite rooms for second and final year students. The building also houses a conference room, one of the college's music practice rooms and the college gym. Many of the post-graduates are housed in another college annex, St Aldate's House, which is situated down St Aldate's near Folly Bridge. There are also a small number of undergraduates (particularly international students) who live in the building. Each room has its own en suite and a kitchen shared with up to nine other students. 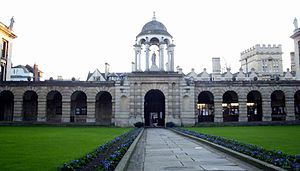 High Street entrance to Queen's College from the main quad.

Queen's is an active community performing strongly in intercollegiate sport competitions, having a variety of societies and, as one of the larger colleges, hosting triennial Commemoration balls. The 2007 ball coincided with the 666th anniversary of the college.[11] The college's next ball will be held in 2016.

Queen's is host to a number of dining, drinking and sports societies as well as some which are more academically orientated such as a medical society. 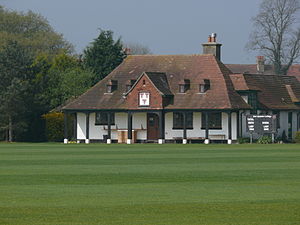 The college playing field, less than a mile from the main buildings, runs down to the banks of the Isis: It has a football and a hockey pitch, together with hard tennis courts, a netball court and a pavilion. The football ground is nicknamed Fortress Riverside by the club and its supporters due to its close proximity to the Isis. Queen's College shares a rugby pitch nearby with University College. In the summer the goal posts go down and a cricket square appears in the middle.

On the opposite bank of the river is a boathouse, shared with two other colleges. The college's two squash courts, located at the Cardo Building. The college has a designated table tennis room.

College sport is organised and funded through the Amalgamated Sports Clubs Committee, consisting of individual club captains and other representatives of college sport.[12] The Queen's College competes strongly in most of the intercollegiate Cuppers (tournament style) and league sports, with many 1st teams competing in top divisions.

The College is notable for having one of the oldest boat clubs in the world, along with many other colleges. In 1837, The Queen's College Boat Club represented Oxford in the third Boat Race against Lady Margaret Boat Club, representing Cambridge, and won. This event, held on the River Thames at Henley-on-Thames, is credited with leading to support from the town for the establishment of the Henley Royal Regatta, one of the most famous rowing events in the world, in 1839[citation needed]. The college's colours were changed thereafter from red and white to navy blue and white, the colours of the university. Rowing is still a major sport in the College, with the second men's boat winning blades in Torpids 2015. 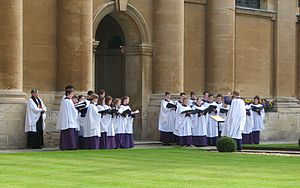 The choir performing in the Front Quad on Ascension morning 2009.

The Queen's College is well known in and beyond Oxford for the quality and quantity of its musical activities. The mixed-voice Chapel Choir is conducted by the Organist and Praelector in Music, Owen Rees, a noted scholar of Iberian polyphony, and occasional services are conducted by the Organ Scholars. The singers include Choral Scholars (up to eighteen at any one time) and volunteers, all of whom are auditioned. The Choir sings Evensong three times a week during term, and performs one major concert each term, often with a noted orchestral ensemble; most recently, the choir performed Bach's St. John Passion in the Sheldonian Theatre. The choir also undertakes regular tours and short visits both within this country and abroad. The Eglesfield Musical Society, named after the Founder (and the oldest musical society in Oxford), organises a substantial series of concerts each year, ranging from chamber music to orchestral works. These concerts provide performing and conducting opportunities for the College's many musicians, as well as featuring visiting artists. There are weekly lunchtime organ recitals in College, including, during 2000, a series featuring the complete organ works of Bach, to mark the 250th anniversary of the composer's death.

The Neda Agha-Soltan Graduate Scholarship, named after an Iranian student who died in the 2009 Iranian election protests, was established at Queen's in 2009.

As is the case with many Oxbridge colleges, Queen's uses a Latin grace which is recited every evening before the second sitting of dinner:

At gaudy dinners this grace is sung by the choir.