The Ramble and Lake

From Infogalactic: the planetary knowledge core
Jump to: navigation, search
File:The Lake Central Park.jpg
The Lake from the Ramble

From Bethesda Fountain. The Lake forms the foreground to The Ramble beyond.

Bow Bridge lit on a winter's night
File:13am196.jpg
Central-Park, Winter: The Skating Pond, Published by Currier & Ives, 1862: Bow Bridge is in the background

The Ramble and Lake is a main feature of Central Park in New York City. Part of Frederick Law Olmsted and Calvert Vaux's "Greensward" plan (1857), The Ramble was intended as a woodland walk through highly varied topography, a "wild garden" away from carriage drives and bridle paths, to be wandered in, or to be viewed as a "natural" landscape from the formal lakefront setting of Bethesda Terrace (illustration below) or from rented rowboats on the Lake. The 38-acre (150,000 m2) Ramble embraces the deep coves of the north shore of the Lake, excavated between bands of bedrock; it offers dense naturalistic planting, rocky outcrops of glacially scarred Manhattan bedrock, small open glades, and an artificial stream (The Gill) that empties through the Azalea Pond, then down a cascade into the Lake. Its ground rises northwards towards Vista Rock, crowned by Belvedere Castle, a lookout and eye-catching folly.[1][2]

The Park's most varied and intricately planted landscape was planted with native trees— tupelo (Nyssa sylvatica); American sycamore; white, red, black, scarlet, and willow oaks; Hackberry; and Liriodendron — together with some American trees never native to the area, such as Kentucky coffee tree, yellowwood, and cucumber magnolia, and a few exotics, such as Phellodendron and Sophora. Smaller natives include sassafras. Aggressively self-seeding black cherry and black locust have come to dominate the Ramble.[3] A 1979 census of The Rambles' trees, taken by Bruce Kelly, Philip Winslow, and James Marston Fitch, found 6000 trees, including 60 specimen trees of landscape value.[4]

The 20-acre (81,000 m2) Lake unified what Calvert Vaux called the "irregular disconnected featureless conglomeration of ground".[5] It was excavated, entirely by hand, from unprepossessing swampy ground transected by drainage ditches and ramshackle stone walls.[6] Through the low-lying site the Sawkill flowed sluggishly from sources under the present American Museum of Natural History and in the prospective park south of Seneca Village, originally exiting the park under Fifth Avenue about East 74th Street, where Conservatory Water lies today, on its way to the East River.[7][8] To create the Lake the outlet was dammed with a broad, curving earth dam, which carries the East Carriage Drive past the Kerbs Boathouse (1954), at the end of the Lake's eastern arm, so subtly that few visitors are aware of the landform's function. After six month's intensive effort, the Lake was ready in the winter of 1858 for its first season of ice-skating. Its center was seven feet deep, with terraced shorelines to lower levels for skaters' safety.[9] Originally, in other seasons a tour boat picked up and dropped visitors at five landings with rustic shelters: four have been rebuilt, and rowboats are rented at the boathouse.[citation needed]

Overlooking the Lake at the rocky promontory that Olmsted called The Hernshead (translation: heron's head) stands the Ladies' Pavilion, a wrought iron shelter in a playful gothic style. It provides a classic atmospheric view, changing with light and weather, of Midtown skyscrapers rising from a belt of trees, with the Lake as foreground. The Ladies' Pavilion was built, probably to designs of Calvert Vaux, to shelter ladies waiting to change streetcars at the Columbus Circle corner of the park. When the Maine Monument was installed on its site, the cast-iron elements were disassembled and stored, to be re-erected on the Hernshead in the 1950s. The Ladies' Pavilion was almost lost to rust and vandalism when it was restored in 1979 as a project funded by Arthur Ross,[note 1] one of the first projects in the restoration of Central Park. 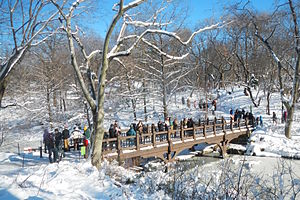 The Lake was renovated in the late 2000s by the Central Park Conservancy in a project to enhance both its ecological and scenic aspects. In the summer of 2007, the first phase of a restoration of the Lake and its shoreline plantings commenced, with replanting using native shrubs and understory trees around the northern end of the Lake, from Bank Rock Bay— a narrow cove in the northwest corner that had become a silted-up algae-covered stand of aggressively invasive phragmites reeds— to Bow Bridge, which received replicas of its four original Italianate cast-iron vases, overspilling with annuals. In the earliest stages, invasive non-native plants like Japanese knotweed were eradicated, the slopes were regraded with added hummus and protected with landscaping burlap to stabilize the slopes while root systems became established and leaf litter developed.[citation needed]

Bank Rock Bridge, also called Cabinet Bridge, which spans the mouth of the cove, was recreated in its original materials— carved oak with cast-iron panels and pine decking— following Calvert Vaux's original design of 1859–60.[10] The cascade, where the Gill empties into the lake, was reconstructed to approximate its dramatic original form, inspired by paintings of Asher B. Durand. Sections of the Lake were dredged of accumulated silt— topsoil that had washed off the surrounding slopes— and the island formerly in the lake, which gradually eroded below water level, was reconstructed in the summer of 2007 with rugged boulders along its shoreline, graded wetland areas, and submerged planting shelves for water-loving native plants, like pickerel weed.[11]

Oak Bridge spanning Bank Rock Bay in the Lake's northwest corner, is the major entrance to the Ramble from the West Side and, since its recreation in 2009 from Calvert Vaux's original drawings, a picturesque feature. The bridge that was built in 1860 of white oak with decorative openwork panels of cast iron, has been recreated in steel clad in ornamental cast iron facings, with a wooden deck.[12] Restoration of further sections of the Lake's shoreline landscapes will be undertaken. The first renovated sections were opened to visitors in April 2008. 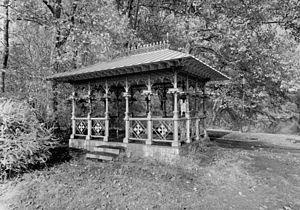 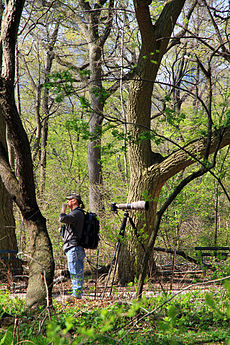 Bird-watching in the Ramble 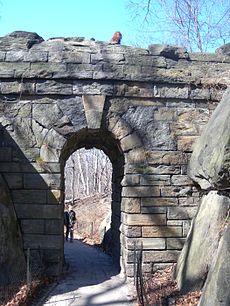 The Ramble is one of the major centers of bird watching in Central Park: 230 species of birds have been spotted over the years, including more than 20 species of warblers that pass through during spring and fall migration in April and October.[13] A misguided sense that The Ramble's plantings were progressing in some way towards a "climax forest" and should be left alone, coupled with heavy urban use, has degraded the landscape, which has been partially renovated more than once. The current, ongoing renovation of The Ramble and the shorelines of the Lake began again in 2006. The present goal of the woodland restoration and management program is gradually to restore the undergrowth of a healthy forest floor and to control off-path trampling and bike riding.

Since at least the early 20th century, the seclusion of The Ramble has been used for private homosexual encounters. In the 1920s, the lawn at the north end was referred to as the "fruited plain", and in the 1950s and 1960s, The Ramble was feared by many as a haven for "anti-social persons".[14] In the early 1960s, under Mayor Robert F. Wagner, Jr., the parks department proposed building a senior center in the Ramble with the hope of curbing gay encounters and anti-gay assaults.[15] Today, The Ramble's strong reputation for cruising for sex has given way somewhat to nature walks and environmentalism. However, some in the gay community still consider The Ramble to be "ground zero for outdoor gay sex", enjoying the "retro feel" of sneaking off into the woods.[16] As a tradition much older than Christopher Street and Fire Island, The Ramble continues to be a gay icon even in the more open environment of modern New York.[citation needed]