The Rifleman is an American Western television program starring Chuck Connors as rancher Lucas McCain and Johnny Crawford as his son, Mark McCain. It was set in the 1870s and 1880s in the town of North Fork, New Mexico Territory. The show was filmed in black-and-white, half-hour episodes. The Rifleman aired on ABC from September 30, 1958, to April 8, 1963, as a production of Four Star Television. It was one of the first prime time series on American television to show a widowed parent raising a child.

The program was titled to reflect McCain's use of a modified Winchester rifle. Shown at the beginning of every episode in the opening credits, McCain would fire the rifle using the lever rather than pulling the trigger. 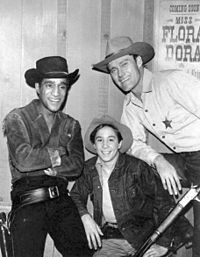 The series centers on Lucas McCain, a Union Civil War veteran and widower. McCain had been a lieutenant in the 11th Indiana Infantry Regiment, and he had received a battlefield commission at the Battle of Five Forks just before the end of the war.[2] Having previously been a homesteader, McCain buys a ranch outside the fictitious town of North Fork, New Mexico Territory, in the pilot episode. He and his son, Mark, had come from Enid, Oklahoma following the death of his wife when his son was six years old.[citation needed]

The opening theme at the beginning of each episode depicted McCain walking down the street of a town while rapid-firing his Winchester 44-40 1892 model rifle that had been modified at the trigger and lever. The rifle's modification allowed McCain to fire the rifle only by hand pumping the lever which had a pin imbedded in it to trip the weapon's trigger.[3] At various points during the series, episodes would show McCain deftly handling and shooting the rifle ambidextrously.[4]

The pilot episode, "The Sharpshooter", was originally telecast on CBS as part of Dick Powell's Zane Grey Theatre on March 7, 1958; it was repeated (in edited form) as the first episode of the series on ABC. Regulars on the program included Marshal Micah Torrance (R. G. Armstrong was the original marshal for two episodes, the first and the fourth), Sweeney the bartender (Bill Quinn), and a half-dozen other residents of North Fork (played by Hope Summers, Joan Taylor, Patricia Blair, John Harmon, and Harlan Warde). Fifty-one episodes of the series were directed by Joseph H. Lewis (director of 1950s Gun Crazy and known for his film noir style). Ida Lupino directed one episode, "The Assault". Connors wrote several episodes. Robert Culp (of CBS's Trackdown) wrote one two-part episode, and Frank Gilroy wrote "End of a Young Gun".[citation needed]

The February 17, 1959 episode of The Rifleman was a spin-off for an NBC series, Law of the Plainsman, starring Michael Ansara as Marshal Sam Buckhart. In the episode "The Indian", Buckhart comes to North Fork to look for Indians suspected of murdering a Texas Ranger and his family.[5] 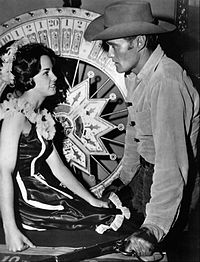 Beverly Englander and Chuck Connors in the 1961 episode "Lariat".

The series was set during the 1880s; a wooden plaque next to the McCain home states that the home was rebuilt by Lucas McCain and his son Mark in August 1881.[citation needed]

A common thread in the series is that people deserve a second chance; Marshal Micah Torrance is a recovering alcoholic, and McCain gives a convict a job on his ranch in "The Marshal". Royal Dano appeared as a former Confederate States of America soldier in "The Sheridan Story" who is given a job on the McCain ranch and encounters General Philip Sheridan, the man who cost him his arm in battle. Learning why the man wants him dead, Sheridan arranges for medical care for his wounded former foe, quoting Abraham Lincoln's last orders to "...bind up the nation's wounds".[6]

McCain has human foibles. In "Death Trap", an episode with Phil Carey as former gunman (and old adversary) Simon Battles, he is unwilling to believe the man has changed and become a doctor. It takes a gunfight (with Battles fighting alongside him) to make him admit he is wrong. In "Two Ounces Of Tin" with Sammy Davis, Jr. as Tip Corey (a former circus trick-shot artist turned gunman), McCain angrily orders him off the ranch when he finds him demonstrating his skills to Mark. McCain has a reputation in the Indian Territories of Oklahoma, where he first acquired the nickname "the Rifleman", and where his wife had died in a smallpox epidemic.[citation needed]

The series was created by Arnold Laven and developed by Sam Peckinpah, who would become a director of Westerns. Peckinpah, who wrote and directed many episodes, based many characters and plots on his childhood on a ranch. His insistence on violent realism and complex characterizations, as well as his refusal to sugarcoat the lessons he felt the Rifleman's son needed to learn about life, put him at odds with the show's producers at Four Star. Peckinpah left the show and created a short-lived series, The Westerner, with Brian Keith.[citation needed]

Westerns were popular when The Rifleman premiered, and producers tried to find gimmicks to distinguish one show from another. The Rifleman's gimmick was a modified Winchester Model 1892 rifle, with a large ring lever drilled and tapped for a set screw. The lever design allowed him to cock the rifle by spinning it around his hand. In addition, the screw could be positioned to depress the trigger every time he worked the lever, allowing for rapid fire, emptying the magazine in under five seconds during the opening credits on North Fork's main street.

The #8-32 UNC trigger-trip screw pin was used in two configurations: with the screw head turned inside (close to the trigger) or, more often, outside the trigger guard with a locknut on the outside (to secure its position). In some episodes, the screw was removed, when rapid-fire action was not required. When properly adjusted, the screw “squeezed” the trigger when the lever was fully closed. The rapid-fire mechanism was originally designed to keep Connors from puncturing his finger with the trigger as he quickly cycled the action of the rifle. With this modification, it was not necessary for Connors to pull the trigger for each shot and therefore he did not have to place his finger in harm's way.

The rifle may have appeared in every episode, but it was not always fired; some plots did not require violent solutions (for example, one involving Mark's rigid new teacher). McCain attempts to solve as many problems as possible without resorting to shooting, yet still manages to kill 120 villains over the show's five-year run. It is notable that McCain almost never carried a pistol.

The rifle was an anachronism, as the show was set 12 years before John Browning designed any such rifle.

The 1892 Winchester caliber .44-40 carbine with a standard 20-inch barrel used on the set of The Rifleman appeared with two different types of levers. The backwards, round-D-style loop was used in the early episodes. Sometimes the rifle McCain uses has a saddle ring (the purpose of this ring is to allow the rider to tie the gun with a lanyard, to secure it in the scabbard). The lever style later changed to a flatter lever (instead of the large loop) with no saddle ring.

McCain fires 12 shots from his rifle during the opening credits: seven shots in the first close-up and five more as the camera switches to another view. The blank cartridges are shorter than standard cartridges, so the magazine will hold more of the blanks. The soundtrack contained a dubbed 13th shot, to allow the firing to end with a section of the theme music. The rifle was chambered for the .44/40 W.C.F. (Winchester Center Fire) cartridge, which was used in both revolvers and rifles.[9] He could supposedly fire off his first round in three-tenths of a second, which certainly helped in a showdown.

Gunsmith James S. Stembridge modified two Model 1892s for use in regular and close-up filming.[10] In addition, a Spanish-made Gárate y Anitúa "El Tigre" lever action, a near-copy of the Model 1892, was modified for use as a knockabout gun. The El Tigre is seen in scenes where the rifle is in a saddle scabbard and is not drawn; and in stunts where the rifle was thrown to the ground, used as a club, or in any stunt where there was the possibility of damage to the original Winchester 1892s.[11] These three rifles were the only ones used by Connors during the run of the series.

The now-defunct Stembridge Gunsmiths provided the rifles and ammunition. Ammunition was quarter-load 5-in-1 blank cartridges containing smokeless powder, which did not produce the thick clouds of smoke the genuine black powder cartridges of the 1880s did. Most (if not all) of the sound effects for the rifle shots were dubbed, which is why the rifle sounded so different from the other gunshots on the show.

The 1892 Winchester is a top-eject rifle (opening the action by pushing the finger-lever forward moves the bolt rearward and thereby opens the top of the receiver). Loaded rounds or empty cases from the chamber eject straight up when the lever is pushed fully open (forward). When Connors cycled the action by spinning the rifle to his side, the cartridge in the action could fall out. Therefore the rifle was modified with a plunger, which would hold the round in place.

The Winchester Model 1892 rifle was designed by John Moses Browning and, other than general appearance, it is has nothing in common with earlier lever-action rifles using the same class of cartridges. The significant improvement was the addition of vertical lugs that securely lock the bolt and receiver when the gun fires. Winchester originally produced this gun from 1892 to 1941; total production was slightly over 1,000,000. 27 variations in five chamberings were made over the course of production, but the basic design was largely unaltered. As with the earlier Model 1873, the light and handy Model 1892 was chambered for handgun cartridges, favored by many Westerners to simplify ammunition supply problems by using the same cartridge in both a handgun and a rifle. The Model 1892 was replaced by the Browning-designed Model 1894, which also had an impressive manufacturing history, with over 7,000,000 produced, and is still being produced to this day by a successor to Winchester. The Model 94's popularity and long production history may be related to it being the first Winchester to be designed for the then-new "smokeless" powder.

On December 13, 2014, AMC began airing the series on television on Saturday mornings beginning at 6 a.m. ET (06:00). The airings began at the pilot episode The Sharpshooter and initially aired seven episodes in a row.[12]

MPI Home Video has released The Rifleman on DVD in Region 1 in a number of versions. It has released single-disc DVDs with five episodes; from 2002–2006 it released six sets, each with 20 episodes. The releases are random collections of episodes, rather than the original broadcast order. These releases are out of print, since MPI Home Video no longer owns the rights to the series. Levy-Gardner-Laven Productions, the original producer, is again the sole copyright owner of The Rifleman series.[14]

In late 2013, Levy-Gardner-Laven Productions, Inc. will be the only authorized outlet to offer for the very first time all 168 episodes of The Rifleman, the original series, newly restored and assembled in DVD box sets. The episodes will be released in sequential order, by season, in high quality boxed sets with exclusive special features. The first boxed set of all Season 1 episodes were made available on December 4, 2013 for $69.95. The second season episodes were released on November 28, 2014.[14]

In late 2011, CBS announced plans to remake the original Rifleman series.[15] Chris Columbus was slated to be the executive producer and direct, with Robert Levy, Steven Gardner, and Arthur Gardner (related to original producers Levy-Gardner-Laven) as executive producers.[16] The remake project was canceled a few months later, without a pilot episode being made.[17]