From Infogalactic: the planetary knowledge core
(Redirected from The Royal Infirmary of Edinburgh)
Jump to: navigation, search

John Munro, President of the Incorporation of Surgeons in 1712, set in motion a project to establish a "Seminary of Medical Education" in Edinburgh, of which a General Hospital was an integral part.[11] His son, Alexander Monro primus, by then Professor of Anatomy, circulated an anonymous pamphlet in 1721 on the necessity and advantage of erecting a Hospital for the Sick Poor. In 1725 the Royal College of Physicians of Edinburgh wrote to the stock-holders of the Fishery Company, which was about to be wound up, suggesting that they assign their shares for the purpose of such a hospital. Other donors included many wealthy citizens, most of the physicians and several surgeons, numerous Church of Scotland parishes (at the urging of their Assembly) and the Episcopal meeting houses in Edinburgh.[12] The committee set up by the donors leased "a house of small rent" near the College from the University for 19 years. 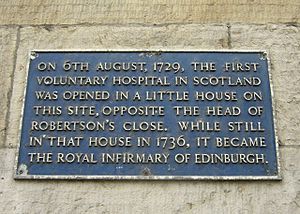 Plaque marking the founding of the Infirmary

Known, at first, as the Hospital for the Sick Poor, the Physicians' Hospital, or Little House, it was established at the head of Robertson's Close on the site of the building on the corner of South Bridge and Infirmary Street, now marked with a plaque, on 6 August 1729. A "gentlewoman" was engaged as Mistress or House-keeper, and a "Nurse or Servant" was hired for the patients, both women to be resident and "free of the burden of children and the care of a separate family." The physicians, who had seen the poor gratis twice weekly at their college, arranged for one of their number to attend the hospital, to see both inpatients and outpatients. Six Chirurgeon-Apothecaries (including Alexander Monro) also agreed to attend in turn, and to dispense the medicines prescribed by the physicians from their own shops, also without payment.

The first patient, a lady from Caithness suffering from "chlorosis," was discharged recovered after three months. Thirty five patients were admitted in the first year, of whom 19 were cured, 5 recovered, 5 dismissed either as incurable or for irregularities and one died in the hospital (of "consumption"). They came from all over Scotland, but mainly from Edinburgh and its environs. Diseases cured included pains, inflammations, agues, ulcers, cancers, palsies, flux, consumption, hysterick disorders and melancholy. A free advice and medicine service for out-patients was very popular, receiving a 1000 patients by 1754,[13] which presented the hospital with prohibitively high costs and demand. Fundraising began for a new hospital, driven by Monro and Drummond, and the appeal attracted funds from churches throughout Scotland, landed gentry, private individuals, and prominent professionals including physicians, surgeons, merchants and lawyers, as well as donations of labour and building materials.[13] 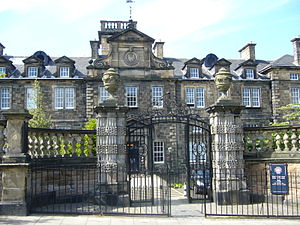 It received a Royal Charter from George II in 1736 which gave it its name of the Royal Infirmary of Edinburgh[14] and commissioned William Adam to design a new hospital on a site close by on what became Infirmary Street. In 1741 the hospital moved the short distance to the not yet completed building which eventually had 228 beds compared to 4 beds in the Little House.[15] By the 1830s the hospital had become short of space and, in 1832, the former Royal High School in nearby High School Yards, built by Alexander Laing in 1777, was converted to a surgical hospital with a new operating theatre built to the east. This was soon found to be inadequate and a new surgical hospital, designed by David Bryce, was built fronting Drummond Street, opening in 1853. The new building was linked to the High School Yards building by an extension to the north.

The Infirmary Street buildings were demolished in 1884 and replaced with public swimming baths and a school. The ornamental gates and gate piers now front the former surgical hospital on Drummond Street. The four attached Ionic columns on the frontispiece of the hospital were removed and incorporated as a combined column in a monument to the Covenanters who were defeated at the Battle of Rullion Green. This stands outside the entrance to Dreghorn Barracks on Redford Road in the south west of the city. The original surgical theatre, which was on the roof of the 1741 building, was re-erected as part of stables in the grounds of Redford House, also on Redford Road. It has since been converted into a house known as Drummond Scrolls taking its name from the large attached carved bracket scrolls, also from the surgical theatre of 1741. The house is category B-listed by Historic Scotland. The surgical hospitals of 1832/1853 later accommodated the Geography Department of the University of Edinburgh, and other university departments, including Natural Philosophy (now Physics), filled up the High School Yards site.

Significant changes came with the introduction of the "New System" in 1873. Four years before, Sir Joseph Lister had been appointed as Professor of Surgery to the RIE.[16] Using antiseptics and narcotics he proved to be very successful, thus attracting patients from higher social classes to the hospital.[17] The hospital managers felt the existing nurses were lacking both medical knowledge and appropriate behaviour. They appointed Deputy Surgeon-General Charles Hamilton Fasson as Medical Superintendent. Fasson recruited a group of 17 trained Nightingale Nurses from St. Thomas’s Hospital London. In 1873 Elizabeth Barclay and Angélique Lucille Pringle started building up a system of nursing where the nurses were under the control of the Lady Superintendent of Nurses instead of individual ward doctors. They also introduced a systematic training of nurses, who were, after one year of probation, admitted to the RIE’s Register Book. Accordingly, the RIE had implemented the first Scottish nursing school. Up to the movement into the new buildings 102 probationers had been entered into the RIE’s Registry Book.[18] 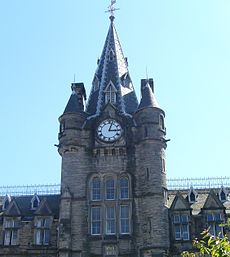 Clocktower of the old Royal Infirmary 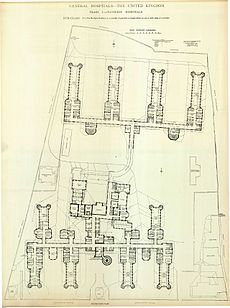 In 1879, at the instruction of the then Lord Provost, Thomas Jamieson Boyd,[19] the infirmary moved to a new location, then in the fresher air of the edge of the city. The site, on Lauriston Place, had been occupied by George Watson's Hospital (a school, known then as a hospital). The school moved a short distance away to the former Merchant Maiden Hospital (another school) in Archibald Place. The original school building, by the same William Adam as the earlier infirmary, was incorporated into the new David Bryce-designed infirmary buildings and the chapel remained in use for the entirety of the infirmary's occupation of the site.

In the 1920s the hospital needed to expand, and once again George Watson's College was asked to move. An arrangement was reached to acquire the school's site, with the school to remain there until new premises could be built elsewhere. By 1932 the school's new premises in Colinton Road were ready, and the old Archibald Place building was demolished to make way for the Simpson Memorial Pavilion, used primarily as a maternity wing.

In 1948, the infirmary was incorporated into the National Health Service (NHS). Over the years it has maintained close ties to the University of Edinburgh.

In May 2001, Lothian Health Trust sold the 20-acre (81,000 m2) Lauriston Place site for £30 million to Southside Capital Ltd., a consortium comprising Taylor Woodrow, Kilmartin Property Group, and the Bank of Scotland. It has been redeveloped as the Quartermile housing, shopping, leisure and hotel development. Much of the David Bryce infirmary will remain visible, but some infirmary buildings have been demolished. 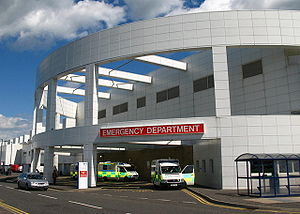 The Emergency Department entrance of the new building in Little France, Edinburgh.

In 2003 a new 900-bed Royal Infirmary opened at Little France,[20] the new location reflecting the need for it to serve not just people living in Edinburgh, but also Midlothian and East Lothian. The new hospital is linked to the Chancellor's Building, the main teaching facility for the University of Edinburgh Medical School.[21]

The Little France site initially attracted some controversy in the local media, such as the Edinburgh Evening News, not least because the city's main accident and emergency facilities are some distance from the city centre, and also because the public transport links to the site had been criticised as inadequate. The hospital is now served by many bus routes to and from all areas of the city. The new location is also served by a regular service to St Johns Hospital in Livingston and Livingston Bus Terminal, the 400/X400 are run by E&M Horsburgh and funded by West Lothian and Edinburgh Councils and NHS Lothian.

The replacement hospital had been built on a mostly green field site in the south-east of the city, with the contract signed in August 1998. The new building was designed by Keppie Design and constructed under a PFI contract by Balfour Beatty.[22] The development of the new site cost £184 million,[23] £34 million more than originally budgeted. The building was built without air conditioning, and portable units are required for the summer months.[24] Jim and Margaret Cuthbert unveiled evidence outlining why the PFI scheme was a poor use of public funds whilst resulting in huge profits for private investors.[25]

The Royal Hospital for Sick Children in Edinburgh is to be rebuilt on the Little France site beside the Infirmary. It is planned to be open by 2016-17.[26]

From 2016 it will be one of 4 major trauma centres where specialist services are based as part of a new national major trauma network in Scotland.[27]

The Infirmary in literature

The Royal Infirmary of Edinburgh has often been described in works of fiction, biography and history, and depicted from both the point of view of the sick and those caring for them. The English poet William Ernest Henley e.g. stayed as a patient at the RIE for three years (1873–75). In several poems he portrayed hospital life as well as individual nurses.[31][32] A more recent example is the series of mainly humorous novels by Colin Douglas, which cover the postwar era up to the 1980s. The first of these was filmed for BBC television in 1986.