The Royal and Ancient Golf Club of St Andrews 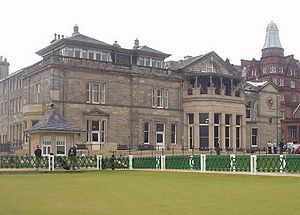 The clubhouse of the R&A.

The Royal and Ancient Golf Club of St Andrews is one of the oldest and most prestigious golf clubs in the world (the oldest possibly being The Royal Burgess Golfing Society of Edinburgh at Barnton, Edinburgh, instituted 1735).[1] It is based in St Andrews, Fife, Scotland, and is regarded as the worldwide "Home of Golf".[2] Formerly, it was also one of the governing authorities of the game, but in 2004 this role was handed over to a newly formed group of companies, collectively known as The R&A.

The organisation was founded in 1754 as the Society of St Andrews Golfers, a local golf club playing at St Andrews Links, but quickly grew in importance. In 1834, King William IV became its patron and the club became known under its present name. In 1897, the Society codified the rules of golf, and, gradually over the next 30 years, was invited to take control of the running of golf tournaments at other courses.

The Royal and Ancient Golf Club (but not The R&A) had a men-only membership policy; in 2012, former British Prime Minister Gordon Brown called on the club to abandon this in favour of a non-discriminatory policy,[3] as did the Vice-Chancellor of the University of St Andrews, Louise Richardson.[4]

On 18 September 2014, the club voted in favour of admitting female members.[5] In February 2015 the club's first female honorary members were announced - Princess Anne, Laura Davies, Renee Powell, Belle Robertson, Lally Segard, Annika Sörenstam and Louise Suggs.[6] At that time the club also announced, "In addition to the honorary members, a number of women have been admitted as members of the club with more set to follow in the coming months."[6] Also in 2015, Lady Bonallack became the first woman to take part in a match as a member of the club; specifically, she was the first woman to play in the club's annual match against the Links Trust.[7]

The R&A is the ruling authority of golf throughout the world except the United States and Mexico, where this responsibility rests with the United States Golf Association (USGA). It works in collaboration with national amateur and professional golf organisations in more than one hundred and ten countries.

The R&A cooperates with the USGA in producing and regularly revising the "Rules of Golf", and the two bodies have issued the rules jointly since 1952. The "Rules of Golf" are revised on a four-year cycle and with the revision which became effective on 1 January 2012 for the first time a single common set of Rules applied throughout the World.[8]

The two bodies also collaborate on the corresponding rule interpretative work, "Decisions on the Rules of Golf", which is reviewed on a two-year cycle.[9] The R&A is also involved in formulating technical specifications for golfing equipment. Dr Steve Otto is the technical Director at the R&A. The R&A is based in St Andrews, Fife, Scotland.

Committees of the R&A

Apart from the Junior Open Championships all of these events are for men and boys. The Ladies Golf Union organises a similar range of events for women and girls, most notably the Women's British Open. The R&A is also involved in the organisation of the two World Amateur Team Championships - the Eisenhower Trophy for men and the Espirito Santo Trophy for women - through its role in the International Golf Federation.

The Royal and Ancient Golf Club of St Andrews itself is now simply a golf club. It has 2,400 members from all over the world. Although the clubhouse is situated just behind the first tee of the Old Course, the club does not own any of the St Andrews courses, despite the common misconception, and must share the tee times with members of other local clubs, residents and visitors alike. Responsibility for the management of the courses is undertaken by the St Andrews Links Trust, a charitable organization that owns and runs seven golf courses at St Andrews.