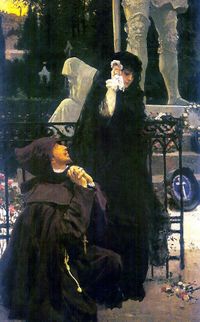 The Stone Guest (Russian: Каменный гость, Kamenny gost) is a poetic drama by Alexander Pushkin based on the Spanish legend of Don Juan, spelled Дон Гуан (Don Guan) by Pushkin.

Pushkin wrote The Stone Guest in 1830 as part of a collection of four short plays known as The Little Tragedies. The play is based on the familiar Don Juan legend, but while most traditional adaptations present it as farcical and comedic, Pushkin's "little tragedy" is indeed a romantic tragedy. Save for the duel, there is little action, and though written in the form of a play, scholars agree that it was never meant for the stage.[citation needed]

Pushkin's wrote the play after seeing the premiere of a Russian-language version of Mozart's Don Giovanni. He borrowed certain elements from da Ponte's libretto, but made the story his own, focusing more on the tragic romantic elements than on the farcical ones.

Don Juan, illegally returned from exile for having murdered Commander de Salva, seduces Donna Anna, the widow of de Salva, when she visits the grave of her late husband. Donna Anna agrees to a date at her house. Don Juan arrogantly invites the grave statue of the Commander to stand watch during the date. Indeed, during the date, they hear the stone steps of the Commander. The statue offers a hand to Don Juan, he boldly takes it, and they both descend through the floor.

The phrase "Commander's Steps"/"Steps of the Commander" have become winged words in Russian culture in reference to an approach of a sinister fate. Alexander Blok wrote a poem in 1912 titled Commander's Steps (Шаги Командора).