The Tales of Ensign Stål

The Tales of Ensign Stål (Swedish original title: Fänrik Ståls sägner, Finnish: Vänrikki Stoolin tarinat, or year 2007 translation Vänrikki Stålin tarinat) is an epic poem written in Swedish by the Finland-Swedish author Johan Ludvig Runeberg, the national poet of Finland. The poem describes the events of the Finnish War (1808–1809) in which Sweden lost its eastern territories; these would become incorporated into the Russian Empire as the Grand Duchy of Finland.

The first part of Ensign Stål was first published in the revolutionary year 1848, the second in 1860. It shaped Finnish identity and was later given out for free during the Winter War to raise patriotic spirit. The first chapter of the poem also became the national anthem of Finland.

The name of the title character, "Stål", is Swedish for steel, a typical example of a so-called "soldier's name". These were names, often consisting of simple words for traits or traits related to the military or nature, given to Swedish soldiers by their commanders, and many of Runeberg's characters have them: Dufva, Svärd and Hurtig ('pigeon', 'sword' and 'quick') are other examples. 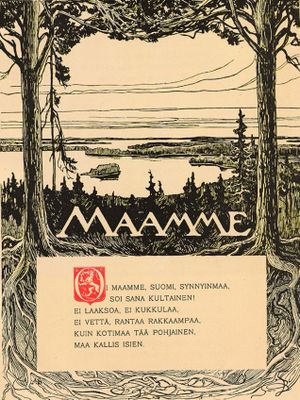 Among the most famous characters is the simple but heroic rotesoldat Sven Dufva. The organisations Lotta Svärd and Lottorna were named after the character in the poem of the same name.

From its publication to the mid-twentieth Century, The Tales of Ensign Stål was staple reading in both Finnish and Swedish schools. It shaped the later image of the war and of some of its real-life protagonists. Admiral Carl Olof Cronstedt is mainly remembered today for his treacherous surrender of the fortress of Sveaborg. The Russian general Yakov Kulnev, on the other hand, is described positively as a chivalrous and brave soldier and ladies' man.

Ensign Stål was translated into Finnish by a group led by fennoman professor Julius Krohn in 1867. Later translations were made by Paavo Cajander in 1889 and Otto Manninen 1909. Albert Edelfelt drew the illustrations between 1894–1900. Due to the dated language, a new translation was issued in 2007. It raised some controversy, in particular due to the new wording of the poem Maamme, the national anthem of Finland.