From Infogalactic: the planetary knowledge core
Jump to: navigation, search
For the 1931 film, see The Threepenny Opera (1931 film). For the 1990 film, see Mack the Knife (film).

The Threepenny Opera[1] (Die Dreigroschenoper) is a "play with music", translated by German dramatist Elisabeth Hauptmann from John Gay's 18th-century English ballad opera, The Beggar's Opera,[2] with music by Kurt Weill, and insertion ballads by François Villon and Rudyard Kipling as adapted by Bertolt Brecht. The work offers a Socialist critique of the capitalist world. It opened on 31 August 1928 at Berlin's Theater am Schiffbauerdamm.

By 1933, when Weill and Brecht were forced to leave Germany by Hitler's Machtergreifung,[3] the play had been translated into 18 languages and performed more than 10,000 times on European stages.[4] Songs from The Threepenny Opera have been widely covered and become standards, most notably "Die Moritat von Mackie Messer" ("The Ballad of Mack the Knife") and "Seeräuberjenny" ("Pirate Jenny").

Set in Victorian London, the play focuses on Macheath, an amoral, antiheroic criminal.

Macheath ("Mackie," or "Mack the Knife") marries Polly Peachum. This displeases her father, who controls the beggars of London, and he endeavours to have Macheath hanged. His attempts are hindered by the fact that the Chief of Police, Tiger Brown, is Macheath's old army comrade. Still, Peachum exerts his influence and eventually gets Macheath arrested and sentenced to hang. Macheath escapes this fate via a deus ex machina moments before the execution when, in an unrestrained parody of a happy ending, a messenger from the Queen arrives to pardon Macheath and grant him the title of Baron.

The Threepenny Opera is a work of epic theatre. It challenges conventional notions of property as well as those of theatre. The Threepenny Opera is also an early example of the modern musical comedy genre. Its score is deeply influenced by jazz. The orchestration involves a small ensemble with a good deal of doubling-up on instruments (in the original performances, for example, some 7 players covered a total of 23 instrumental parts, though modern performances typically use a few more players).[5] Its opening and closing lament, "The Ballad of Mackie Messer", was written just before the Berlin premiere, when actor Harald Paulsen (Macheath) threatened to quit if his character did not receive an introduction; this creative emergency resulted in what would become the work's most popular song, later translated into English by Marc Blitzstein as "Mack the Knife" and now a jazz standard that Louis Armstrong, Bobby Darin, Ella Fitzgerald, Frank Sinatra, Michael Bublé, Robbie Williams, Ray Quinn, and countless others have all covered. Another well-known song, recorded by Nina Simone, Judy Collins, and Marc Almond, is "Pirate Jenny", which was also recorded by Steeleye Span under the alternative title "The Black Freighter". The Pet Shop Boys,[6] Tom Waits, and William S. Burroughs have recorded "The Second Threepenny Finale" under the title "What Keeps Mankind Alive?". 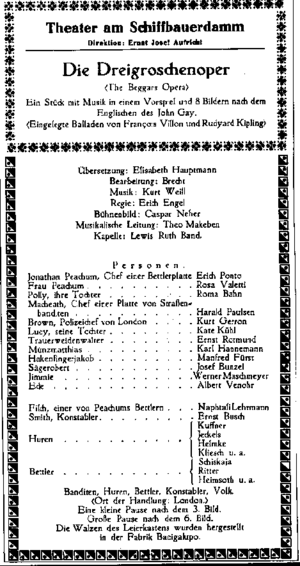 Playbill of the premiere performance at Theater am Schiffbauerdamm Berlin, 31 August 1928. The name of Lotte Lenya, who played Jenny, was omitted by mistake.

The Threepenny Opera was first performed at the Theater am Schiffbauerdamm in Berlin in 1928 on a set designed by Caspar Neher. Despite an initially poor reception, it became a great success, playing 400 times in the next two years. The performance was a springboard for one of the best known interpreters of Brecht and Weill's work, Lotte Lenya, who was married to Weill.

At the end of WWII the first theater performance in Berlin was a rough production of The Threepenny Opera at the Theater am Schiffbauerdamm. Wolf Von Eckardt described the 1945 performance where audience members climbed over ruins and passed through a tunnel to reach the open-air auditorium deprived of its ceiling. In addition to the smell of dead bodies trapped beneath the rubble, Eckardt recollects the actors themselves were "haggard, starved, [and] in genuine rags. Many of the actors ... had only just been released from concentration camp. They sang not well, but free."[7]

In the United Kingdom, it took some time for the first fully staged performance to be given (9 February 1956, under Berthold Goldschmidt). There was a concert version in 1933, and there was a semi-staged performance on 28 July 1938. In between, on 8 February 1935 Edward Clark conducted the first British broadcast of the work. It received scathing reviews from Ernest Newman and other critics.[8] But the most savage criticism came from Weill himself, who described it privately as "... the worst performance imaginable ... the whole thing was completely misunderstood". But his criticisms seem to have been for the concept of the piece as a Germanised version of The Beggar's Opera, rather than for Clark's conducting of it, of which Weill made no mention.[9][10][11]

The Threepenny Opera has been translated into 18 languages and performed more than 10,000 times. A French version produced by Gaston Baty and written by Nicole Steinhof and André Mauprey was presented in October 1930 at the Théâtre Montparnasse. It was rendered as L'Opéra de quat'sous; (quatre sous, or four pennies being the idiomatically equivalent French expression for Threepenny and, by implication, cut-price, cheap). G. W. Pabst produced a German film version in 1931 called Die 3-Groschen-Oper, and the French version of his film was again rendered as L'Opéra de quat'sous.

It has been translated into English several times. One was published by Marc Blitzstein in the 1950s and first staged under Leonard Bernstein's baton at Brandeis University in 1952. It was later used on Broadway. Other translations include the standard critical edition by Ralph Manheim and John Willett (1976), one by noted Irish playwright and translator Frank McGuinness (1992), and another by Jeremy Sams for a production at London's Donmar Warehouse in 1994.

At least six Broadway and Off-Broadway productions have been mounted in New York City.

Regional productions include one at the Williamstown Theatre Festival, Massachusetts, in June and July 2003. Directed by Peter Hunt, the musical starred Jesse L. Martin as Mack, Melissa Errico as Polly, David Schramm as Peachum, Karen Ziemba as Lucy Brown and Betty Buckley as Jenny. The production received favorable reviews.[15][16][17]

A street singer entertains the crowd with the illustrated murder ballad or Bänkelsang, titled "Die Moritat von Mackie Messer" ("Ballad of Mack the Knife"). As the song concludes, a well-dressed man leaves the crowd and crosses the stage. This is Macheath, alias "Mack the Knife".

The story begins in the shop of Jonathan Jeremiah Peachum, the boss of London's beggars, who outfits and trains the beggars in return for a slice of their takings from begging. In the first scene, the extent of Peachum's iniquity is immediately exposed. Filch, a new beggar, is obliged to bribe his way into the profession and agree to pay over to Peachum 50 percent of whatever he made; the previous day he had been severely beaten up for begging within the area of jurisdiction of Peachum's protection racket.

After finishing with the new man, Peachum becomes aware that his grown daughter Polly did not return home the previous night. Peachum, who sees his daughter as his own private property, concludes that she has become involved with Macheath. This does not suit Peachum at all, and he becomes determined to thwart this relationship and destroy Macheath.

The scene shifts to an empty stable where Macheath himself is preparing to marry Polly once his gang has stolen and brought all the necessary food and furnishings. No vows are exchanged, but Polly is satisfied, and everyone sits down to a banquet. Since none of the gang members can provide fitting entertainment, Polly gets up and sings "Seeräuberjenny", a revenge fantasy in which she is a scullery maid turning pirate queen to order the execution of her bosses and customers. The gang becomes nervous when the Chief of Police, Tiger Brown, arrives, but it's all part of the act; Brown had served with Mack in England's colonial wars and had intervened on numerous occasions to prevent the arrest of Macheath over the years. The old friends duet in the "Kanonen-Song" ("Cannon Song" or "Army Song"). In the next scene, Polly returns home and defiantly announces that she has married Macheath by singing the "Barbarasong" ("Barbara Song"). She stands fast against her parents' anger, but she inadvertently reveals Brown's connections to Macheath which they subsequently use to their advantage.

Polly warns Macheath that her father will try to have him arrested. He is finally convinced that Peachum has enough influence to do it and makes arrangements to leave London, explaining the details of his bandit "business" to Polly so she can manage it in his absence. Before he leaves town, he stops at his favorite brothel, where he sees his ex-lover, Jenny. They sing the "Zuhälterballade" ("Pimp's Ballad") about their days together, but Macheath doesn't know Mrs Peachum has bribed Jenny to turn him in. Despite Brown's apologies, there's nothing he can do, and Macheath is dragged away to jail. After he sings the "Ballade vom angenehmen Leben" ("Ballad of the Pleasant Life"), another girlfriend, Lucy (Brown's daughter) and Polly show up at the same time, setting the stage for a nasty argument that builds to the "Eifersuchtsduett" ("Jealousy Duet"). After Polly leaves, Lucy engineers Macheath's escape. When Mr Peachum finds out, he confronts Brown and threatens him, telling him that he will unleash all of his beggars during Queen Victoria's coronation parade, ruining the ceremony and costing Brown his job.

Jenny comes to the Peachums' shop to demand her money for the betrayal of Macheath, which Mrs Peachum refuses to pay. Jenny reveals that Macheath is at Suky Tawdry's house. When Brown arrives, determined to arrest Peachum and the beggars, he is horrified to learn that the beggars are already in position and only Mr Peachum can stop them. To placate Peachum, Brown's only option is to arrest Macheath and have him executed. In the next scene, Macheath is back in jail and desperately trying to raise a sufficient bribe to get out again, even as the gallows are being assembled. Soon it becomes clear that neither Polly nor the gang members can, or are willing to, raise any money, and Macheath prepares to die. He laments his fate and poses the questions: "What's picking a lock compared to buying shares? What's breaking into a bank compared to founding one? What's murdering a man compared to employing one?" Macheath asks everyone for forgiveness ("Grave Inscription"). Then a sudden and intentionally comical reversal: Peachum announces that in this opera mercy will prevail over justice and that a messenger on horseback will arrive ("Walk to Gallows"); Brown arrives as that messenger and announces that Macheath has been pardoned by the queen and granted a title, a castle and a pension. The cast then sings the Finale, which ends with a plea that wrongdoing not be punished too harshly as life is harsh enough. 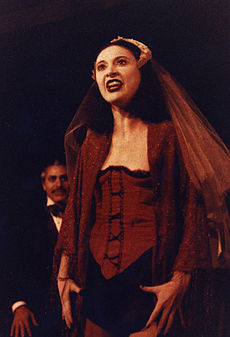 Recordings are in German, unless otherwise specified.

There have been at least three film versions. German director G. W. Pabst made a 1931 German- and French-language version simultaneously (a common practice in the early days of sound films). Another version was directed by Wolfgang Staudte in West Germany in 1962 starring Curd Jürgens, Gert Fröbe, and Hildegard Knef. Scenes with Sammy Davis Jr. were added for its American release.[26] In 1989 an American version (renamed Mack the Knife) was released, directed by Menahem Golan, with Raúl Juliá as Macheath, Richard Harris as Peachum, Julie Walters as Mrs Peachum, Bill Nighy as Tiger Brown, Julia Migenes as Jenny, and Roger Daltrey as the Street Singer.[27] Andy Serkis has announced a collaboration with musician Nick Cave on a planned motion capture film of The Threepenny Opera.[28]