The Times of India 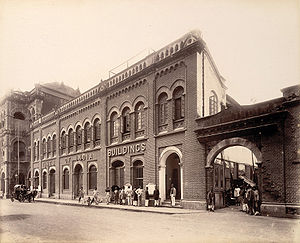 The Times of India issued its first edition 3 November 1838 as The Bombay Times and Journal of Commerce.[6][7] The paper published Wednesdays and Saturdays under the direction of Raobahadur Narayan Dinanath Velkar, a Maharashtrian Reformist, and contained news from Britain and the world, as well as the Indian Subcontinent. In 1850, it began to publish daily editions.

In 1860, editor Robert Knight (1825–1892) bought the Indian shareholders interests, merged with rival Bombay Standard, and started India's first news agency. It wired Times dispatches to papers across the country and became the Indian agent for Reuters news service. In 1861, he changed the name from the Bombay Times and Standard to The Times of India. Knight fought for a press free of prior restraint or intimidation, frequently resisting the attempts by governments, business interests, and cultural spokesmen and led the paper to national prominence.[8] In the 19th century, this newspaper company employed more than 800 people and had a sizeable circulation in India and Europe.

Subsequently, The Times of India saw its ownership change several times until 1892, when Thomas Bennett and Frank Morris Coleman, who drowned in the 1915 sinking of the SS Persia, acquired the newspaper through their new company, Bennet, Coleman & Co. Ltd.

In 1946, they(who)sold the company to sugar magnate Ramkrishna Dalmia, of the then-famous industrial family, Dalmiyas, for Rs 20 million.In 1955 Vivian Bose Commission of Inquiry found that Ramkrishna Dalmia in 1947 had engineered the acquisition of the media giant Bennett, Coleman by transferring monies from a bank and an insurance company of which he was the Chairman. In the court case that followed, Ramkrishna Dalmia was sentenced to two years in Tihar Jail on charges of Dalmia was prosecuted for embezzlement and fraud.[9]

But for most of the jail term he managed to spend in hospital. Upon his release his son-in-law Sahu Shanti Prasad Jain to whom he had entrusted running of Bennett, Coleman & Co. Ltd. rebuffed his efforts to resume command of the company.[9][10]

In the early 1960s, Shanti Prasad Jain was imprisoned on charges of selling newsprint on the black market.[11][12] And based on the Vivian Bose Commission's earlier report which found wrongdoings of the Dalmia - Jain group, that included specific charges against Shanti Prasad Jain, the Government of India filed a petition to restrain and remove the management of Bennett, Coleman and company. Based on the pleading, Justice directed the Government to assume control of the newspaper which resulted in replacing half of the directors and appointing a Bombay (now Mumbai) High Court judge as the Chairman.

Under Government of India

Following the Vivian Bose Commission report indicating serious wrongdoings of the Dalmia - Jain group, on 28, August 1969, the Bombay High Court under Justice J.L.Nain passed an interim order to disband the existing board of Bennett Coleman and a new board under Government be constituted. The bench ruled that “Under these circumstances,the best thing would be to pass such orders on the assumption that the allegations made by the petitioners that the affairs of the company were being conducted in a manner prejudicial to public interest and to the interests of the Company are correct”. [13] Following that order Shanti Prasad Jain ceased to be a director and the company ran with new directors on board appointed by the Government of India, barring a lone stenographer of Jains. Curiously, the court appointed, D K Kunte as Chairman of the Board. While a freedom fighter and a man of impeccable integrity, Kunte had no prior business experience and was also an Opposition member of the Lok Sabha.

Back to Jain Family

In 1976, during the emergency in India, the government transferred ownership of the newspaper back to Ashok Kumar Jain (Sahu Shanti Prasad Jain's son and Ramkrishna Dalmia's grandson and the father of Samir Jain and Vineet Jain).[14] The Jains too often landed themselves in various money laundering scams and Ashok Kumar Jain has to flee the country when the Enforcement Directorate pursued his case strongly in 1998 for alleged violations of illegal transfer of funds to a tune of US$1.25 million to an overseas account in Switzerland.[15][16][17][18] 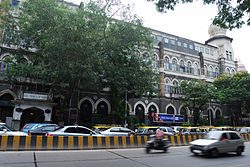 TOI's first office is opposite the Chhatrapati Shivaji Terminus in Mumbai where it was founded.[7]