From Infogalactic: the planetary knowledge core
(Redirected from The Trump Building)
Jump to: navigation, search

The Trump Building is a 70-story skyscraper in New York City. Originally known as the Bank of Manhattan Trust building,[4] and also known as the Manhattan Company Building,[2] it was later known by its street address 40 Wall Street when its founding tenant merged to form the Chase Manhattan Bank.[5] The building, between Nassau Street and William Street in Manhattan, New York City, was completed in 1930 after only 11 months of construction. 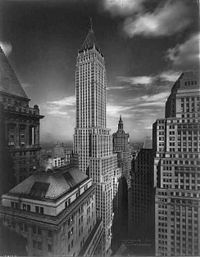 The building was designed by H. Craig Severance, along with Yasuo Matsui (associate architect), and Shreve & Lamb (consulting architects). Edward F. Caldwell & Co. designed the lighting. Der Scutt of Der Scutt Architect designed the lobby and entrance renovation.[5] Its pinnacle reaches 927 feet (283 m) and was very briefly the tallest building in the world, soon surpassed by a spire attached to the Chrysler Building a few months later.[6]

Construction of the Bank of Manhattan Building at 40 Wall Street began in 1928, with a planned height of 840 feet (260 m), making it 135 feet (41 m) taller than the nearby Woolworth Building, completed in 1913. More importantly, the plans were designed to be two feet taller than the Chrysler Building, which was in an ostensible competition to be the world’s tallest building. In order to stay ahead in the race, the architects of 40 Wall Street changed their originally announced height of 840 feet (260 m), or 68 stories, to 927 feet (283 m), or 71 stories, making their building, upon completion in May 1930, the tallest in the world. However, this triumph turned out to be short-lived.

Upset by Chrysler’s victory, Shreve & Lamb, consulting architects of 40 Wall Street, wrote a newspaper article claiming that their building was actually the tallest, since it contained the world's highest usable floor. They pointed out that the observation deck in the Bank of Manhattan Building was nearly 100 feet (30 m) above the top floor in the Chrysler Building, whose surpassing spire was strictly ornamental and essentially inaccessible.[8] However, such trivialities became a moot point when the Empire State Building was completed eleven months later in 1931, becoming the world’s tallest building at 1,250 feet (380 m) in both of those categories.[6]

On the evening of May 20, 1946, a United States Army Air Forces Beechcraft C-45F Expediter airplane crashed into the north side of the building. The twin-engined plane was heading for Newark Airport on a flight originating at Lake Charles Army Air Field in Louisiana. It struck the 58th floor of the building at about 8:10 PM, creating a 20-by-10-foot (6.1 m × 3.0 m) hole in the masonry, and killing all five aboard the plane, including a WAC officer. The fuselage and the wing of the splintered plane fell and caught onto the 12th story ledge.[9] Fog and low visibility were identified as the main causes of the crash. At the time of the accident, LaGuardia Field reported a heavy fog that reduced the ceiling to 500 feet (150 m), obscuring the view of the ground for the pilot at the building's 58th story level. Parts of the aircraft and pieces of brick and mortar from the building fell into the street below, but there were no reported injuries to any of the estimated 2,000 workers in the building, nor anyone on the street.[10]

This crash at 40 Wall Street was the second of its kind in New York City's history, the first being when an Army B-25 bomber struck the 78th floor of the Empire State Building in July of the year before. The cause of that crash was also fog and poor visibility.[10]

The 1946 accident was the last time an airplane accidentally struck a skyscraper in New York City until October 11, 2006, when a small plane carrying New York Yankees pitcher Cory Lidle crashed into a 50-story condo building on Manhattan's Upper East Side.[11][12] 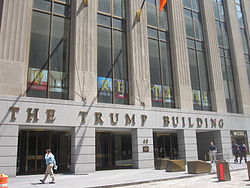 In 1982, Joseph J. and Ralph E. Bernstein purchased 40 Wall Street and were later found to be acting on behalf of Ferdinand E. Marcos, the late President of the Philippines. When Marcos was removed from power and his assets in the United States were frozen, the building was placed in limbo.[13]

In 1995, after years of neglect, 40 Wall Street was bought by Donald Trump and later renamed The Trump Building. He planned to convert the upper half of it to residential space, leaving the bottom half as commercial space. However, the cost of converting it to residential space proved to be too high, and it remains 100% commercial space.[14] He tried to sell the building in 2003, expecting offers in excess of $300 million. Such offers did not materialize, and Trump retains control of the building. In the ninth episode of the fourth season of The Apprentice, Trump claimed he only paid $1 million for the building, but that it was actually worth $400 million. This episode aired November 17, 2005. On CNBC's The Billionaire Inside, Trump again claimed he paid $1 million for the building, but stated the value as $600 million, a $200 million increase from two years earlier. The episode aired October 17, 2007 on CNBC.

It is also stated that the building was bought for $1 million, in the 2005 book Trump Strategies for Real Estate: Billionaire Lessons for the Small Investor written by George H. Ross (his legal advisor). However, it has also been reported that Trump paid $10 million for the building.[15]

In 1998, the building was designated a landmark by the New York City Landmarks Preservation Commission. The tower is the tallest mid-block building in New York City.[16]