From Infogalactic: the planetary knowledge core
(Redirected from The Vatican and Eastern Europe (1846-1958))
Jump to: navigation, search 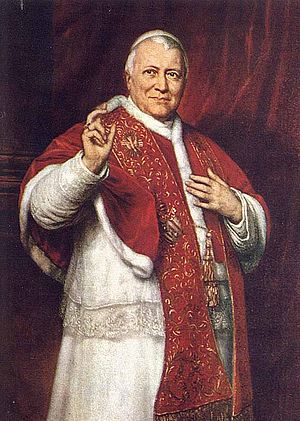 Pope Pius IX (1846-1878) In 1847 an Accomodamento, a generous but short-lived agreement was reached, by which Russia allowed the Pope to fill vacant Episcopal Sees of the Latin rites both in Russia and the Polish and Lithuanian provinces of Russia.

The Pontificate of Pius IX began in 1846. In 1847 an Accomodamento”, a generous agreement, by which Russia allowed the Pope to fill vacant Episcopal Sees of the Latin rites both in Russia and the Polish and Lithuanian provinces of Russia. The new freedoms were short-live, as they were undermined by jealousies of the rival Orthodox Church, Polish political aspirations, and the tendency of imperial Russia, to act most brutally against any dissension. Pope Pius IX first tried to position himself in the middle, strongly opposing revolutionary and violent opposition against the Russian authorities, and, appealing to them for more Church freedom. After the failure of the Polish uprising in 1863, Pope Pius IX sided with the persecuted Poles, loudly protesting their persecutions, infuriating the Tsarist government to the point that all Catholic seats were closed by 1870, a catastrophe, which continued to haunt Vatican diplomacy for decades to come.[1]

File:Leo-xiii-sm.jpg
Pope Leo XIII (1878-1903) was able to reach several agreements in 1896, which resulted in better conditions for the faithful and additional appointments of bishops.

Pope Leo XIII began his pontificate with a friendly letter to Tsar Alexander II, in which he reminded the Russian monarch of the millions of Catholics living in his empire, who would like to be good Russian subjects, provided their dignity is respected.

In Prussia, Polish Catholics were persecuted as Poles and, during the Kulturkampf, together with German Catholics, as Catholics as well: The Kulturkampf, which Otto von Bismarck began in 1871, insinuated a Polish-Catholic-Austrian connection.[2]

Under Pope Pius X (1903–1914), the situation of Polish Catholics in Russia did not improve.

By 1914, Germany needed Polish volunteers for the war. Polish politicians had modest requests for their support: full recognition of Polish language, religious education in Polish language, the return of expropriated properties and the elimination of laws, which discriminated against the Polish population.[3] This was not granted.

Russia and the Soviet Union

With the Russian Revolution, the Vatican was faced with a new, so far unknown situation, an ideology and government which rejected not only the Catholic Church but religion as a whole. “The Pope, the Tsar, Metternich, French radicals and German police, are united against communism said Karl Marx and Friedrich Engels[4] The Historical Institute of the Soviet Academy of Sciences wrote, that “reactionary policies of the Vatican” were an outgrow of fear of socialism and hate of communism.

The relations with Russia changed drastically for a second reason. The Baltic states and Poland gained their independence from Russia after World War I, thus enabling a relatively free Church life in those former Russian countries. Estonia was the first country to look for Vatican ties. 11 April 1919, Secretary of State Pietro Gasparri informed the Estonian authorities that the Vatican would agree to have diplomatic relations. A concordat was agreed upon in principle a year later, June 1920. Because of the small Catholic population in predominantly Protestant Estonia, the handful of Catholic priests there continued to be administered from Latvia until 1924. Development of an independent Catholic hierarchy for Estonia began late in that year with the formation of the Apostolic Administration of Estonia in November.[5]

Jāzeps Rancāns became the first representative of the fledgling Latvian government at the Vatican in October 1919.[6] Hermanis Albats negotiated a concordat between Latvia and the Holy See in May 1921.[6] This concordat was signed 30 May 1922. It guarantees freedom for the Catholic Church, establishes an archdiocese, liberates clergy from military service, allows the creation of seminaries and catholic schools, describes church property rights and immunity. The Archbishop swears alliance to Latvia.[7]

Relations with Catholic Lithuania were slightly more complicated because of the Polish occupation of Vilnius, a city and archiepiscopal seat, which Lithuania claimed as well as its own. Polish forces had occupied Vilnius and committed acts of brutality in its Catholic seminary there. This generated several protests of Lithuania to the Holy See.[8] Relations with the Holy See were defined during the pontificate of Pope Pius XI (1922–1939).

Before all other heads of State, Pope Benedict XV on October 1918 congratulated the Polish people to their independence.[9] In a public letter to the archbishop Kakowski of Warsaw, he remembered their loyalty and the many efforts of the Holy See to assist them. He expressed his hopes that Poland will take again its place in the family of nations and continue its history as an educated Christian nation.[9] In March 1919, he nominated ten new bishops and, soon after, Achille Ratti, already in Warsaw as his representative, as papal nuncio.[9] 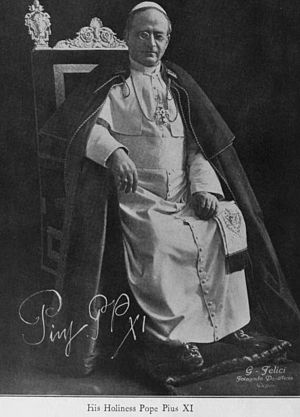 Pope Pius XI (1922-1939) Warsaw forced his departure as Nuncio. Two years later, he was Pope. He signed concordats with numerous countries including Lithuania and Poland

Negotiations with the Soviet Union

Pius XI nominated Michel d'Herbigny in 1922 as his principal agent in policymaking towards the Soviet Union. In Berlin, Nuncio Eugenio Pacelli worked mainly on clarifying the relations between Church and the German State. But, after Achille Ratti was elected Pope, in the absence of a papal nuncio in Moscow, Pacelli worked also on diplomatic arrangements between the Vatican and the Soviet Union. He negotiated food shipments for Russia, where the Church was persecuted. He met with Soviet representatives including Foreign Minister Georgi Chicherin, who rejected any kind of religious education, the ordination of priests and bishops, but offered agreements without the points vital to the Vatican.[10] "An enormously sophisticated conversation between two highly intelligent men like Pacelli and Chicherin, who seemed not to dislike each other," wrote one participant.[11] Despite Vatican pessimism and a lack of visible progress, Pacelli continued the secret negotiations, until Pope Pius XI ordered them to be discontinued in 1927.

The "harsh persecution short of total annihilation of the clergy, monks, and nuns and other people associated with the Church",[12] continued well into the Thirties. In addition to executing and exiling many clerics, monks and laymen, the confiscating of Church implements "for victims of famine" and the closing of churches were common.[13] Yet according to an official report based on the Census of 1936, some 55% of Soviet citizens identified themselves openly as religious, while others possibly concealed their belief.[13]

During the pontificate of Pope Pius XI (1922–1939), Church life in Poland flourished: There were some anti-clerical groups opposing the new role of the Church especially in education,[14] But numerous religious meetings and congresses, feasts and pilgrimages, many of which were accompanied by supportive letters from the Pontiff, took place.[14]

Lithuania was recognized by the Vatican in November 1922. The recognition included a stipulation by Pietro Gasparri to Lithuania, “to have friendly relations with Poland”. There were diplomatic stand-stills, as the Lithuanian government refused to accept virtually all episcopal appointments by the Vatican. The relations did not improve when, in April 1926 Pope Pius XI unilaterally established and reorganized Lithuanian ecclesiastical province without regard to Lithuanian demands and proposals, the real bone of contention being Vilnius, occupied by Poland. In the Fall of 1925, Mečislovas Reinys, a Catholic professor of Theology became Lithuanian Foreign Minister, and asked for an agreement. The Lithuanian military took over a year later, and a proposal of a concordat, drafted by the papal visitator Jurgis Matulaitis-Matulevičius, was agreed upon by the end of 1926. This concordat was signed in Rome on 27 September 1927 by Cardinal Gasparri and Augustinas Voldemaras.[16] Its content follows largely the Polish Concordat of 1925. Ratifications were exchanged at the Vatican on 10 December 1927 by Cardinal Gasparri and Jurgis Šaulys.[17]