The Victory of Faith

Der Sieg des Glaubens (English: The Victory of Faith, Victory of Faith, or Victory of the Faith) (1933) is the first propaganda film directed by Leni Riefenstahl. Her film recounts the Fifth Party Rally of the Nazi Party, which occurred in Nuremberg from 30 August to 3 September 1933.[1] The film is of great historic interest because it shows Adolf Hitler and Ernst Röhm on close and intimate terms, before Röhm was shot on the orders of Hitler on the Night of the Long Knives in July 1934. All known copies of the film were destroyed on Hitler's orders, and it was considered lost until a copy turned up in the 1990s in the United Kingdom.

The form of the film is very similar to her later and much more expansive film of the 1934 rally, Triumph of the Will. Der Sieg des Glaubens is pure propaganda for the Nazi Party, which funded and promoted the film, which celebrates the victory of the Nazis in achieving power when Hitler assumed the role of Chancellor of Germany in February 1933. 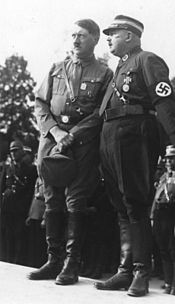 Ernst Röhm, Sturmabteilung (SA) Chief of Staff, with Hitler in August 1933. The following year, Röhm was shot on Hitler's orders, after he refused to commit suicide, in the Night of the Long Knives purge of 1934. 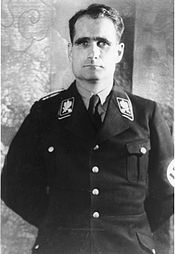 Like her Nazi propaganda films of 1935, the short Tag der Freiheit: Unsere Wehrmacht (Day of Freedom: Our Armed Forces) and the classic propaganda feature Triumph of the Will, Der Sieg des Glaubens documents a Nazi Party rally, the Fifth NSDAP Congress, in a straight chronological format. It has no voiceover or commentary. The activities captured include the welcoming of foreign diplomats and other party members and politicians – such as Franz von Papen – at the Nuremberg train station; Adolf Hitler's arrival at the airport and his meeting with important party members such as Josef Goebbles and Hermann Göring; massive Sturmabteilung (SA, colloquially known as "Brownshirts") parades; and Hitler's speech on the assumption of power by the party, and the tenth anniversary of the German National Socialist movement.

The events shown are in roughly chronological order, starting with the arrival of Hitler in Nuremberg and the welcome given by the Nuremberg Gauleiter, Julius Streicher. Rudolf Hess is shown sitting next to Hitler, and the Fuhrer passes him a bunch of flowers given to him by admirers. Hitler is also shown in several cameos with Ernst Röhm, leader of the SA, whom Hitler would later order murdered in the Night of the Long Knives (1934). The welcome includes a speech from a senior official of the Italian National Fascist Party, Arturo Marpicati, with conveyed greetings from Benito Mussolini. It is followed by the rally on the vast parade ground recently built by Albert Speer, and includes a shot of a Zeppelin airship floating by, complete with swastika on the tailfin. There is also a separate rally of Hitler Youth, with an introduction by Baldur von Schirach. There follows a march past in the streets of the old city, with the party leaders receiving the salutes of the massed goosestepping ranks of the SA and the SS. Familiar faces include Hermann Göring and a brief cameo appearance of Heinrich Himmler, who would be the star of Riefenstahl's next propaganda film, The Triumph of the Will, after his and Gōring's successful efforts incite Hitler to massacre the leadership of the SA.

Marching troops feature again in the final sequences in the main parade ground, with tributes to the fallen from Hitler and Röhm, and various flag ceremonies which appear to have quasi-religious significance to the members of the party. The shots of marching feet and legs has an almost hypnotic effect on the viewer, well parodied by a later British wartime short which matches the time of the marching to the popular song "The Lambeth Walk".

Ernst Röhm, head of the SA and, at the time, the second most powerful man within the Nazi Party, is prominent in The Victory of Faith. In less than a year, in June/July 1934 during the Night of the Long Knives purge, Röhm and many of his lieutenants were executed under Hitler's orders. Hitler personally roused Röhm from his bed at his lakeside hotel when he arrested him for alleged treason in devising a plot against Hitler, a trumped up charge created by Himmler, Göring and Reinhard Heydrich. All references to Röhm were ordered to be erased from German history, which included the destruction of all known copies of the film. The film Triumph of the Will was produced to replace it, but differs in that the upper hierarchy of the Party, "Hitler's paladins".[2] do not receive nearly as much attention in the later film as they did in the earlier one.

Relation to Triumph of the Will

Riefenstahl's next propaganda film, Triumph of the Will', which documented the next year's Party Rally, follows a similar script, which is evident when one sees both films side by side. For example, the city of Nuremberg scenes – down to the shot of a cat that is included in a car-driving sequence in both films. There are panning shots across the roofs of the old town, showing the city awakening before the rally starts in earnest. The camera angles and editing that made Riefenstahl's Triumph of the Will a ground-breaking film are already demonstrated in The Victory of Faith. Furthermore, Herbert Windt reused much of the musical score for this film in the later one, which he also scored. 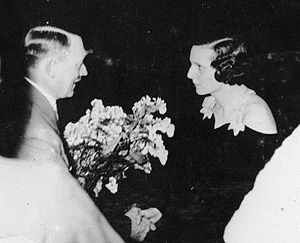 In April 1934, Riefenstahl was visiting Great Britain to speak at major universities to discuss her propaganda film techniques. It is during this visit that at least one copy of this film is known to have been duplicated. It was found after being in storage for over 60 years, and is the only known surviving print. In the home video editions most commonly available, the opening credits appear to have been shot off of a screen projection, but the remainder of the footage appears to be a direct copy of a print. It is available for free viewing and download at the Internet Archive (see below).

A digitally restored edition was released on DVD by International Historic Films in 2012.