From Infogalactic: the planetary knowledge core
Jump to: navigation, search
For other uses, see The Waltons (disambiguation).

The Waltons is an American television series created by Earl Hamner, Jr., based on his book Spencer's Mountain, and a 1963 film of the same name. The show is centered on a family in a rural Virginia community during the Great Depression and World War II.

The series pilot aired as a television movie entitled The Homecoming: A Christmas Story and was broadcast on December 19, 1971.[1] Beginning in September 1972, the series originally aired on CBS for a total of nine seasons. After the series was canceled by CBS in 1981, NBC aired three television movie sequels in 1982, with three more in the 1990s on CBS. The Waltons was produced by Lorimar Productions and distributed by Warner Bros. Domestic Television Distribution in syndication.

The main story takes place in Walton's Mountain, a fictional town at the foot of a mountain in fictitious Jefferson County, Virginia.

The actual place upon which the stories are based is in Nelson County, Virginia and is the community of Schuyler.

The time period is from 1933 to 1946, during the Great Depression and World War II, during the presidential administrations of Franklin D. Roosevelt and Harry S Truman. The year 1933 is suggested by a reference to the opening of the Century of Progress exposition in Chicago, a brief shot of an automobile registration, and it is divulged in episode 18 that the date is in the spring of 1933.[2] The last episode of season one, "An Easter Story", is set in February–April 1934. The year 1934 takes two seasons to cover, while some successive years are covered over the course of a few months.[3]

The series finale, "The Revel", revolves around a party and the invitation date is given as June 4, 1946. A span of 13 years is therefore covered in nine seasons. There are some chronological errors, which ostensibly do not hinder the storyline. 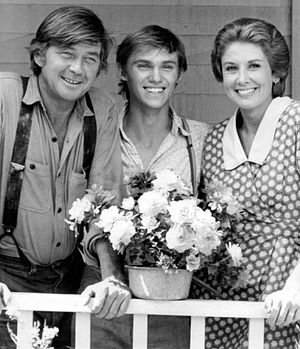 The story is about the family of John Walton Jr. (known as John-Boy), his parents, John and Olivia Walton, their seven children, and John's parents Zebulon "Zeb" and Esther Walton. John-Boy is the oldest of the children (17 years old in the beginning[4]), who becomes a journalist and novelist. Each episode is narrated at the opening and closing by a middle-aged John Jr. (voiced by author Earl Hamner on whom John-Boy is based). John Sr. manages to eke out a living for his family by operating a lumber mill with his sons' help as they grow older. The family income is augmented by some small-scale farming, and John occasionally hunts to put meat on the table.

The family shares hospitality with relatives and strangers as they are able. The small community named after their property is also home to folk of various income levels, ranging from the well-to-do Baldwin sisters, two elderly spinsters who distill moonshine that they call "Papa's recipe"; Ike Godsey, postmaster and owner of the general store with his somewhat snobbish wife Corabeth (a Walton cousin; she calls her husband "Mr. Godsey"); an African-American couple, Verdie and Harley Foster; Maude, a sassy octogenarian artist who paints on wood; Flossie Brimmer, a friendly though somewhat gossipy widow who runs a nearby boarding house; and Yancy Tucker, a good-hearted handyman with big plans but little motivation. Jefferson County sheriff Ep Bridges keeps law and order in Walton's Mountain. The entire family (except for John) attends a Baptist church, of which Olivia and Grandma Esther are the most regular attendees. The Church that the Hamners actually attended was Schuyler Baptist Church], near the Hamner homeplace and is still in operation.[5] The church has helped host several events honoring Earl Hamner, Jr., including one in 2014.

In the signature scene that closes almost every episode, the family house is enveloped in darkness, save for one, two or three lights in the upstairs bedroom windows. Through voice-overs, two or more characters make some brief comments related to that episode's events, and then bid each other goodnight, after which the lights go out.

After completing high school, John-Boy attends fictional Boatwright University in the fictional nearby town of Westham. He later goes to New York City to work as a journalist. 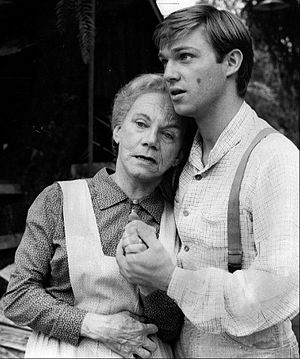 During the latter half of the 1976–77 season, Grandma Esther Walton suffers a stroke and returns home shortly before the death of her husband, Grandpa Zeb Walton (reflecting Ellen Corby's real-life stroke and the death of Will Geer, the actors who portrayed the characters).

During the series' last few years, Mary Ellen and Ben start their own families; Erin, Jason and John Boy are married in later television movie sequels.

World War II deeply affects the family. All four Walton boys enlist in the military. Mary Ellen's physician husband, Curtis "Curt" Willard, is sent to Pearl Harbor and is reported to have perished in the Japanese attack on December 7, 1941. Years later, Mary Ellen hears of sightings of her "late" husband, investigates and finds him alive (played by another actor), but brooding over his war wounds and living under an assumed name. She divorces him and later remarries.

John-Boy's military plane is shot down, while Olivia becomes a volunteer at the VA hospital and is seen less and less; she eventually develops tuberculosis and enters an Arizona sanitarium. Olivia's cousin, Rose Burton, moves into the Walton house to look after the brood. Two years later, John Sr. moves to Arizona to be near Olivia. Grandma appears in only a handful of episodes during the eighth season (she was usually said to be visiting relatives in nearby Buckingham County).

The Homecoming: A Christmas Story (1971) was not originally intended to be a pilot for a series, but it became one because it was so popular.[6] Except for the children and Grandma Walton, the actors for the movie were not the same as for the series. The musical score was by Oscar-winning composer Jerry Goldsmith. Patricia Neal (as Olivia) won a Golden Globe Award for Best Actress - Television Series Drama. The movie was also nominated for three Emmys: Primetime Emmy Award for Outstanding Lead Actress in a Miniseries or a Movie (Neal), Outstanding Writing Achievement in Drama - Adaptation (Earl Hamner), and Outstanding Directorial Achievement in Drama - A Single Program (Fielder Cook).[7] 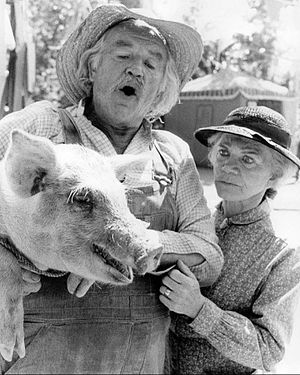 The following is a brief summary of the main characters. See main article for a more complete list.

Earl Hamner's rural childhood growing up in the unincorporated community of Schuyler, Virginia, provided the basis for the setting and many of the storylines of The Waltons. His family and the community provided many life experiences which aided in the characters, values, area, and human-interest stories of his books, movies, and television series. Hamner provided the voice-over of the older John-Boy, usually heard at the beginning and end of each episode.

John-Boy Walton's fictional alma mater, Boatwright University, is patterned after Richmond College, which became part of the University of Richmond on Boatwright Drive near Westham Station in The West End of Richmond, Virginia, about seventy miles east of Schuyler.

Some sources indicate CBS put the show on its Fall 1972 schedule in response to congressional hearings on the quality of television. Backlash from a 1971 decision to purge most rural-oriented shows from the network lineup may have also been a factor. The network gave The Waltons an undesirable timeslot – Thursdays at 8 p.m., opposite two popular programs: The Flip Wilson Show on NBC and The Mod Squad on ABC.[8] "The rumor was that they put it against Flip Wilson and The Mod Squad because they didn't think it would survive. They thought, 'We can just tell Congress America doesn't want to see this'," Kami Cotler, who played Elizabeth Walton, said in a 2012 interview.[8] Ralph Waite was reluctant to audition for the part of John Walton because he didn't want to be tied to a long-running TV series, but his agent persuaded him by saying, "It will never sell. You do the pilot. You pick up a couple of bucks and then you go back to New York."[8] 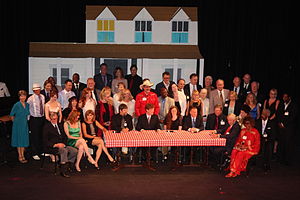 The Waltons won the Primetime Emmy Award for Outstanding Drama Series in 1973. Also in 1973 Richard Thomas won the Emmy for Lead Actor in a Drama Series. Michael Learned won the Emmy for Lead Actress in a Drama Series three times (1973, 1974, and 1976). Ellen Corby was also a three-time winner in the Supporting Actress category, winning in 1973, 1975, and 1976. Will Geer was awarded the Supporting Actor Emmy in 1975. Veteran actress Beulah Bondi won an Emmy in 1977 for Lead Actress in a Single Performance for her guest appearance as Martha Corrine Walton in the episode "The Pony Cart" (Episode #111). She first appeared in The Waltons episode "The Conflict" (Episode #51) as the widow of Zeb Walton's brother.

The series also earned a Peabody Award for its first season.[18]

Warner Home Video has released all nine seasons and six TV movies of The Waltons on DVD in Region 1. Seasons 1–4 have been released in Region 2. The pilot movie, The Homecoming: A Christmas Story, was released by Paramount Home Entertainment. Lorimar produced the series, CBS produced the pilot film, which is why Paramount, under CBS Home Entertainment, handles home video rights for The Homecoming.

Seasons 1–9 are available via streaming through services such as Amazon Video.[20]

Lorimar sold the distribution rights of The Waltons to Warner Bros. Television to avoid a lawsuit owing to the similarities between the series and the film Spencer's Mountain, which Warners owned.[21] Warner Bros. acquired Lorimar in 1989, and has continued to syndicate the series ever since. Reruns currently air in the U.S. on INSP, the Hallmark Channel. In Canada, The Waltons airs on Vision TV and BookTelevision. True Entertainment airs the series in the UK. The series used to be broadcast in the UK on BBC 1 and BBC 2 during the 1970s/1980s.