From Infogalactic: the planetary knowledge core
Jump to: navigation, search
This article is about the open air shopping center in the Pittsburgh metropolitan area. For other uses, see Waterfront (disambiguation).

The Waterfront is a super-regional open air shopping mall spanning the three boroughs of Homestead, West Homestead, and Munhall near Pittsburgh. The shopping mall sits on land once occupied by U.S. Steel's Homestead Steel Works plant, which closed in 1986. It has a gross leasable area of 700,000 square feet (65,000 m2) in "The Waterfront" and 400,000 square feet (37,000 m2) in "The Town Center." The development officially opened in 1999. More development continued into the early 21st century.[1][2]

From its storied past, only smokestacks remain on the site that once helped to give Pittsburgh the name "Steel City."

In 2005, Industrial Workers of the World celebrated their 100th Anniversary, having formed in 1905 out of the palpable labor struggles of that era. The local celebration included events held at the Pump House on the site of The Waterfront.[3] http://www.iww.org/en/taxonomy/term/244/all?page=2

The Pump House is the location of the landing of the Pinkertons who navigated the river in 1892 with the intention of busting up a labor strike of the Amalgamated Association of Iron and Steel Workers at the instruction of Henry Clay Frick. The battle that followed, known as the Homestead Strike / Battle of Homestead, left sixteen people dead (23 wounded) and set back the cause of organizing the iron and steel industry in Pittsburgh for decades. The Battle of Homestead is one of the most noted strikes in American Labor History. 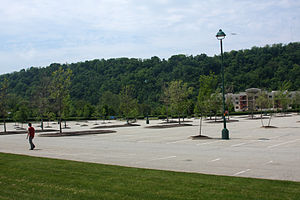 The parking lot at The Waterfront.

The Waterfront, unlike the SouthSide Works located a few miles up the river, was developed in a more suburban fashion, with retail, residential, and office spaces all being separated from each other by vast parking lots. However, unlike the Southside Works, the Waterfront did not benefit from proximity to, and unrestricted access to, a thriving urban commercial area. Also of note; while comparisons of relative tax yield are often made, these comparisons do not take into account the sizeable public investment required to facilitate the Southside Works. The Waterfront was predominantly a private investment, although there was a tax increment financing of approximately $ 25 million approved by three separate municipalities, one county, and one school district, a notable accomplishment. Traffic congestion within the development is common due to the large distances between outlets and the lack of sidewalks and pathways; the limited entrances into and out of The Waterfront also add to the congestion. The complex is separated from the original sections of Homestead, West Homestead, and Munhall, via railroad tracks and does not physically or visually connect with the older sections of the municipalities, which was impossible due to the active rail lines. To facilitate access, Allegheny County constructed a new access ramp to the site from the Homestead High Level (Grays) Bridge, and also partnered with the Commonwealth of PA in 1993 on the construction of the East Flyover Ramp in Munhall Borough. The construction of this ramp was well in advance of development plans which were announced in 1997. This resulted in a ramp which ultimately proved to be less than optimal. The Town Center area of the development is home to stores one would find in most malls, including Charming Charlie, Gap, and Victoria's Secret. Macy's (formerly Kaufmann's), Barnes & Noble, and a Loews Cineplex are located in this area as well. The eastern end of the development resembles more of a traditional suburban strip mall, with many big-box retail stores fronting a large parking lot. Stores here include Bed, Bath, & Beyond, Dick's Sporting Goods, Giant Eagle grocery, Lowe's, and Target. Around the perimeter of the complex, particularly along the Monongahela River, are most of the development's restaurants, almost all of which are typical chain restaurants like Uno Chicago Grill, LongHorn Steakhouse, Panera Bread, Red Robin, T.G.I. Friday's, Eat'n Park, and P. F. Chang's China Bistro, as well as several fast food locations. An apartment complex, a few office buildings (such as GAI Consultants, Inc.), fueling station, and multiple hotels are also located along the river perimeter.

In 2002, Kaufmann's parent company, May Co., announced it would construct a scaled-down version of its department store at The Waterfront. It was the first of its kind in the now-defunct department store company. On September 9, 2006, Kaufmann's became part of the Macy's company.[4]

The store remains open but has been replaced with the Macy's nameplate. It remains one of the smaller Macy's department stores in the chain.

Every May, The Waterfront welcomes The Mentoring Partnership of Southwestern Pennsylvania and many local youth mentoring agencies to the Town Center to talk to shoppers about the importance of mentoring and the number of local children waiting for mentors. In the month of October, The Waterfront recognizes Domestic Violence Awareness month in conjunction with Womansplace. Additionally, they host walks to support research for cancer and polycystic kidney disease.