The Welding Institute or TWI is a research and technology organisation, with a specialty in welding. With headquarters six miles south of Cambridge, Cambridgeshire, England, since 1946, and with facilities across the UK and around the world. TWI works across all industry sectors and in all aspects of manufacturing, fabrication and whole-life integrity management technologies.

TWI services include consultancy, technical advice, research and investigation for industrial member companies and public funding bodies. It also offers training and examination services in NDT, welding and inspection across the globe.

Employing over 800 staff, TWI serves 700 Industrial Member companies across 4500 sites in 80 countries. The formation in 1922 of its professional institution, The Welding Institute, and the later establishment of the British Welding Research Association (BWRA) in 1946 provided the basis of the company group as it is today. The Welding Institute currently has a separate membership of over 6000 individuals.

The Professional Division of TWI is a Licensed Member of the Engineering Council. It is situated at Granta Park, at the junction of the A11 and the terminus of the A505, three miles east of Duxford Museum.

Both industrial and professional members are represented on the Council that oversees TWI’s business and the operational activities of its Directors.

The Welding Institute (TWI Professional Group) is a direct descendant of the Institution of Welding Engineers Limited, which began when 20 men gathered on 26 January 1922 in the Holborn Restaurant in London and resolved to establish an association to bring together acetylene welders and those interested in electric arc welding. The date of registration under the Companies Act was 15 February 1923. Slow growth over the next ten years saw Membership grow to 600 with an income of £800 per annum.

In April 1934, the Institution merged with the British Advisory Welding Council to form a new organisation – the Institute of Welding. A symposium that same year, Welding of Iron and Steel, held in conjunction with the Iron and Steel Institute, showed the need for a research programme. It took the threat of war, the Welding Research Council and modest funding from the Department of Scientific and Industrial Research (DSIR), to generate the will and ability to commence such a programme in 1937.[citation needed] The Institute had no laboratories of its own and supported work, mainly in UK universities.

BWRA bought Abington Hall, near Cambridge, UK, a country house and grounds in poor repair, for £3850 and commenced business under Allan Ramsay Moon as its Director of Research. The first welding shop was established in stables adjoining the house, and fatigue research commenced under Dr. Richard Weck.

BWRA also occupied a house in London, 29 Park Crescent, which it converted into a metallurgical laboratory, with the butler’s pantry becoming the polishing room and the coachman’s quarters, the machine shop.

Ramsay Moon left after one year, disillusioned at the grant of only £30,000 from DSIR, and it fell to Dr. Harry Taylor to grow the organisation into a viable business.[citation needed]

The Institute of Welding had bought property in London very close to the Imperial College of Science and Technology. It ran an expanding training programme through its School of Welding Technology and later the School of Non Destructive Testing.

In 1957, Richard Weck, became Director of BWRA and ensured that the organisation continued to research advances in welding methods, metallurgy and engineering understanding. The 1960s saw significant growth in the size and scope of BWRA, including its involvement in training.[citation needed] In general, these activities complemented those of the Institute of Welding but it became apparent that the two organisations would serve industry better by merging. The successor to DSIR, the Ministry of Technology, put forward no objection so a merger was agreed and a new body – The Welding Institute – was created on 28 March 1968. 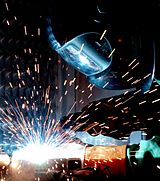 Direct support from Government departments ceased in the 1970s but TWI not only survived this funding crisis but grew rapidly. The original individual Professional Membership envisaged in 1922 developed into a body of more than 7000 engineers.

In 1988 Bevan Braithwaite was appointed as chief executive of The Welding Institute.[2] By 2008, the organisation had opened offices and laboratories at three further sites within the UK (in Middlesbrough, Port Talbot and the Advanced Manufacturing Park, South Yorkshire) and operated facilities in the North America, China, Southeast Asia, India and the Middle East. In 2012, it launched the National Structural Integrity Research Centre (NSIRC) for postgraduate education. By 2015, TWI had established a further UK base in Aberdeen and 12 international branches.