The Wind in the Willows

From Infogalactic: the planetary knowledge core
Jump to: navigation, search
For other uses, see The Wind in the Willows (disambiguation).

The Wind in the Willows is a children's novel by Kenneth Grahame, first published in 1908. Alternately slow moving and fast paced, it focuses on four anthropomorphised animals in a pastoral version of England. The novel is notable for its mixture of mysticism, adventure, morality, and camaraderie and celebrated for its evocation of the nature of the Thames valley.

In 1908, Grahame retired from his position as secretary of the Bank of England. He moved back to Cookham, Berkshire, where he had been brought up and spent his time by the River Thames doing much as the animal characters in his book do—namely, as one of the phrases from the book says, "simply messing about in boats"—and wrote down the bed-time stories he had been telling his son Alistair.

In 1909, Theodore Roosevelt, then President of the United States, wrote to Grahame to tell him that he had "read it and reread it, and have come to accept the characters as old friends".[1] The novel was in its thirty-first printing when playwright A. A. Milne adapted a part of it for the stage as Toad of Toad Hall in 1929. In 2003, The Wind in the Willows was listed at number 16 on the BBC's survey The Big Read.[2]

With the arrival of spring and fine weather outside, the good-natured Mole loses patience with spring cleaning. He flees his underground home, emerging to take in the air and ends up at the river, which he has never seen before. Here he meets Rat (a water vole), who at this time of year spends all his days in, on and close by the river. Rat takes Mole for a ride in his rowing boat. They get along well and spend many more days boating, with Rat teaching Mole the ways of the river.

One summer day, Rat and Mole disembark near the grand Toad Hall and pay a visit to Toad. Toad is rich, jovial, friendly and kind-hearted, but aimless and conceited; he regularly becomes obsessed with current fads, only to abandon them as quickly as he took them up. Having recently given up boating, Toad's current craze is his horse-drawn caravan. He persuades the reluctant Rat and willing Mole to join him on a trip. Toad soon tires of the realities of camp life and sleeps-in the following day to avoid chores. Later that day, a passing motorcar scares the horse, causing the caravan to overturn into a ditch. Rat threatens to have the law on the motorcar drivers while Mole calms the horse, but Toad's craze for caravan travel is immediately replaced by a motorcar obsession.

Mole wants to meet the respected but elusive Badger, who lives deep in the Wild Wood, but Rat—knowing that Badger does not appreciate visits—tells Mole to be patient and wait and Badger will pay them a visit himself. Nevertheless, on a snowy winter's day, while the seasonally somnolent Rat dozes, Mole impulsively goes to the Wild Wood to explore, hoping to meet Badger. He gets lost in the woods, sees many "evil faces" among the wood's less-welcoming denizens, succumbs to fright and panic and hides, trying to stay warm, among the sheltering roots of a tree. Rat, finding Mole gone, guesses his mission from the direction of Mole's tracks and, equipping himself with two pistols and a stout cudgel, goes in search, finding him as snow begins to fall in earnest. Attempting to find their way home, Rat and Mole quite literally stumble across Badger's home—Mole barks his shin upon the boot scraper on Badger's doorstep. Badger—en route to bed in his dressing-gown and slippers—nonetheless warmly welcomes Rat and Mole to his large and cozy underground home, providing them hot food and dry clothes. Badger learns from his visitors that Toad has crashed seven cars, has been hospitalised three times, and has spent a fortune on fines. Though nothing can be done at the moment (it being winter), they resolve that when the time is right they will make a plan to protect Toad from himself; they are, after all, his friends and are worried for his well-being.

With the arrival of summer, Badger visits Mole and Rat to take action over Toad's self-destructive obsession. The three of them go to Toad Hall, and Badger tries talking Toad out of his behaviour, to no avail. They put Toad under house arrest, with themselves as the guards, until Toad changes his mind. Feigning illness, Toad bamboozles the Water Rat (who is on guard duty at the time) and escapes. Badger and Mole are cross with Rat for his gullibility, but draw comfort from the fact that they need no longer waste their summer guarding Toad. However, Badger and Mole continue to live in Toad Hall in the hope that Toad may return. Meanwhile, Toad orders lunch at The Red Lion Inn, and then sees a motorcar pull into the courtyard. He steals the car, drives it recklessly and is caught by the police. He is sent to prison on a twenty-year sentence.

In prison, Toad gains the sympathy of the gaoler's daughter who helps him to escape disguised as a washerwoman. Though free again, Toad is without money or possessions other than the clothes upon his back, and is pursued by the police. After catching a lift on a train, Toad, still disguised as a washerwoman, comes across a horse-drawn barge. The barge's owner offers him a lift in exchange for Toad's services as a washerwoman. After botching the wash, Toad gets into a fight with the barge-woman, who tosses him into the canal. In revenge, Toad makes off with the barge horse, which he then sells to a gypsy. Toad subsequently flags down a passing car, which happens to be the very one he stole earlier. The car owners, not recognizing Toad in his disguise, permit him to drive their car. Once behind the wheel, he is repossessed by his former passion and drives furiously, declaring his true identity to the passengers who try to seize him. This leads to the motorcar landing in a horse-pond, after which Toad flees once more. Pursued by police, he runs accidentally into a river, which carries him by sheer chance to the house of Rat.

Toad now hears from Rat that Toad Hall has been taken over by weasels, who have driven out Mole and Badger. Although upset at the loss of his house, Toad realises what good friends he has and how badly he has behaved. Badger then arrives and announces that he knows of a secret tunnel into Toad Hall through which the enemies may be attacked. Armed to the teeth, Badger, Rat, Mole and Toad enter via the tunnel and pounce upon the unsuspecting weasels who are holding a party. Having driven away the intruders, Toad holds a banquet to mark his return, during which (for a change) he behaves both quietly and humbly. He makes up for his earlier wrongdoings by seeking out and compensating those he has wronged, and the four friends live out their lives happily ever after.

In addition to the main narrative, the book contains several independent short-stories featuring Rat and Mole. These appear for the most part between the chapters chronicling Toad's adventures, and are often omitted from abridgements and dramatizations. The chapter "Dulce Domum" describes Mole's return to his home, accompanied by Rat, in which, despite finding it in a terrible mess after his abortive spring clean, he rediscovers, with Rat's help, a familiar comfort. "The Piper at the Gates of Dawn" tells how Mole and Rat search for Otter's missing son Portly, whom they find in the care of the god Pan. (Pan removes their memories of this meeting "lest the awful remembrance should remain and grow, and overshadow mirth and pleasure".) Finally in "Wayfarers All", Ratty shows a restless side to his character when he is sorely tempted to join a Sea Rat on his travelling adventures. 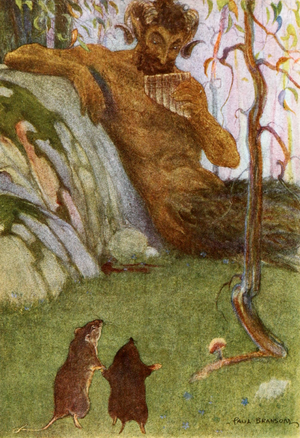 "The Piper at the Gates of Dawn", frontispiece to a 1913 edition by Paul Bransom

The most popular illustrations are probably by E. H. Shepard, originally published in 1931, and believed to be authorised as Grahame was pleased with the initial sketches, though he did not live to see the completed work.[3]

Michel Plessix created a Wind in the Willows watercolour comic album series, which helped to introduce the stories to France. They have been translated into English by Cinebook Ltd.

Inga Moore's abridged edition features text and illustrations paced so that a line of text, such as "oh my oh my", also serves as a caption.

Jamie Hendry Productions published a special edition of the novel in 2015 and gifted it to schools in Plymouth and Salford to celebrate the World Premiere of the musical version of The Wind in the Willows by Julian Fellowes, George Stiles and Anthony Drewe.[6]

In The Enchanted Places, Milne's son Christopher says of The Wind in the Willows:

A book that we all greatly loved and admired and read aloud or alone, over and over and over: The Wind in the Willows. This book is, in a way, two separate books put into one. There are, on the one hand, those chapters concerned with the adventures of Toad; and on the other hand there are those chapters that explore human emotions—the emotions of fear, nostalgia, awe, wanderlust. My mother was drawn to the second group, of which "The Piper at the Gates of Dawn" was her favourite, read to me again and again with always, towards the end, the catch in the voice and the long pause to find her handkerchief and blow her nose. My father, on his side, was so captivated by the first group that he turned these chapters into the children's play, Toad of Toad Hall. In this play one emotion only is allowed to creep in: nostalgia.

The BBC has broadcast a number of radio productions of the story.

Kenneth Williams also did a version of the book for radio.

In 2002 Paul Oakenfold produced a Trance Soundtrack for the story, aired on the Galaxy FM show Urban Soundtracks. These mixes blended classic stories with a mixture of dance and contemporary music.

In 1983 Dixon Scott published A Fresh Wind in the Willows, which not only predates Horwood's sequels (see below) by several years but also includes some of the same incidents, including a climax in which Toad steals a Bleriot monoplane.

William Horwood created several sequels to The Wind in the Willows: The Willows in Winter, Toad Triumphant, The Willows and Beyond, and The Willows at Christmas.

Jan Needle's Wild Wood was published in 1981 with illustrations by William Rushton (ISBN 0-233-97346-X). It is a re-telling of the story of The Wind in the Willows from the point of view of the working-class inhabitants of the Wild Wood. For them, money is short and employment hard to find. They have a very different perspective on the wealthy, easy, careless lifestyle of Toad and his friends.

Mapledurham House in Oxfordshire was an inspiration for Toad Hall.,[13] although, Hardwick House also makes this claim.[14]

The village of Lerryn, Cornwall claims to being the setting for the book.[15]

Simon Winchester suggested that the character of Ratty was based on Frederick Furnivall, a keen oarsman and acquaintance of Kenneth Grahame.[16]

The Scotsman[17] and Oban Times[18] suggested The Wind in the Willows<templatestyles src="Module:Citation/CS1/styles.css"></templatestyles> was inspired by the Crinan Canal because Grahame spent some of his childhood in Ardrishaig.

There is a theory that the idea for the story arose when its author saw a water vole beside the River Pang in Berkshire, southern England. A 29 hectare extension to the nature reserve at Moor Copse, near Tidmarsh Berkshire, was acquired in January 2007 by the Berks, Bucks and Oxon Wildlife Trust.[19]