From Infogalactic: the planetary knowledge core
Jump to: navigation, search
For the theater building at 175 North State Street built in 1921, see Chicago Theatre. 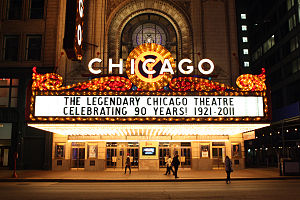 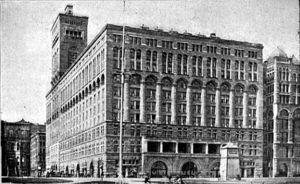 Theater in Chicago describes not only theater performed in Chicago, Illinois but also to the movement in Chicago that saw a number of small, meagerly funded companies grow to institutions of national and international significance. Chicago had long been a popular destination for tours sent out from New York managements, as well as an origins of many shows sent to appear worldwide. 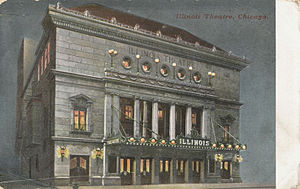 Hull House, the social settlement house of Chicago, had from the 1890s a theatre program under Laura Dainty Pelham which performed the Chicago premiers of numerous of the new plays of Galsworthy, Ibsen, and George Bernard Shaw. In 1912 Maurice Browne founded the Little Theater in Chicago, crediting Pelham's Hull House influence.[1] This, along with the founding of the Toy Theatre in Boston the same year, is credited with starting the American Little Theatre Movement.[2] The troupes that are commonly regarded as having started the postwar stage renaissance were The Second City, Steppenwolf Theatre Company and The Goodman Theatre.

The Second City, founded in 1959, by Paul Sills and Bernie Sahlins is the country's premiere improvisational theater, and its method of developing material has strongly influenced such playwrights as David Mamet (who was a dishwasher there), Jules Feiffer, Lanford Wilson, Jeffrey Sweet, James Sherman, David Auburn, Mark Hollmann, Greg Kotis and Alan Gross. In 1968 Paul Sills left Second City to open The Body Politic Theater where he creatred Story Theater. The Kingston Mines Theater, where the musical "Grease" premiered, began shortly afterwards, the two theaters across the street from each other on Lincoln Avenue. In 1970 Sills invited Stuart Gordon and his Organic Theater Company to move to Chicago and begin what he termed "a scene." The success of these three theaters inspired the creation of other small troupes that grew, notably the Steppenwolf Theatre and the Victory Gardens Theater, both of which, along with the Goodman Theatre, Chicago Shakespeare Theatre and Lookingglass Theatre Company, were honored with regional theater Tony Awards, the only city in the country to have five theaters so honored.

The Goodman Theatre had existed for a number of years with a reputation as a home for revivals, but the arrival of artistic director William Woodman and his assistant Gregory Mosher changed its profile. When Mosher took over as artistic director he enhanced the Goodman's reputation largely due to the work of David Mamet whose play "Sexual Perversity in Chicago" had been Mamet's first success at the Organic Theater Company in 1974. Mosher later produced and directed American Buffalo and Glengarry Glen Ross at the Goodman. The Goodman Theatre also was where Hurlyburly by David Rabe premiered under the direction of Chicago improvisational theater alum Mike Nichols.

After Mosher moved to New York, the artistic directorship went to Robert Falls, former director of the Wisdom Bridge Theatre. Falls is particularly known for his ongoing collaboration with actor Brian Dennehy, including productions of Death of a Salesman and Long Day's Journey Into Night that went to Broadway and won Tony Awards for both of them.

Briefly, The Goodman Theatre is known as the house of directors; Steppenwolf Theatre is known as the house of actors, Victory Gardens Theater as the house of writers; The Second City as the house of improvisation, and Organic Theater Company and later Lookingglass Theatre Company as the home of original image-based productions. Several leading directors associated with these troupes -- Dennis Zacek, Mary Zimmerman and Frank Galati—are alumni of Northwestern University in Evanston, Illinois, just north of Chicago. In addition, writers such as Richard Christiansen of the Chicago Daily News and later the Chicago Tribune, Newcity's senior editor Nate Lee and Hedy Weiss of the Chicago Sun-Times helped encourage Chicagoans to come out and appreciate live theater.[3][4]

Since 1990, Performink has been an industry newspaper for Chicago theater, including show openings and reviews, audition listings, and industry and union news for Chicago actors, directors, dancers, designers, and other theater professionals.

The Drury Lane Theatres were a group of six theaters in the Chicago suburbs founded by Tony DeSantis. He began producing plays in 1949 in a tent adjacent to his Martinique Restaurant to attract customers, then built his first theater in 1958.[5]

Chicago is home to more than 200 small, critically acclaimed theatre companies such as Lifeline Theatre, Remy Bumppo Theatre Company, Redmoon Theater, Trap Door Theatre, and TUTA Theatre. Some have their own performance venues, while many perform in untraditional theatre spaces such as storefronts or bars, or any number of studio or black box theatres around Chicago.

Touring productions also visit the city regularly, mainly playing at the big theaters in the Chicago Theatre District in the Loop.

Following in the tradition of The Second City and Steppenwolf, many of these companies, including American Blues Theater, Stage Left Theatre, Organic Theater Company, and Lifeline Theatre, are ensemble-based. An ensemble-based company is formed of a group of artists (actors, directors, designers, playwrights, etc.) who work collaboratively to create each production.

Chicago theater has a long record of introducing new plays and playwrights. Many of the theaters in Chicago have new play workshop programs to cultivate work from current playwrights. Chicago Dramatists, which was begun by a group of ex-students of a playwriting workshop at Victory Gardens Theater, has an ongoing program of developing new writers, most notably Rebecca Gilman.[6]

The Victory Gardens Theater plays host to a dozen resident playwrights and most of the productions there are premieres of their plays, a number of which have gone on to productions elsewhere. Some of these include James Sherman's Beau Jest, Jeffrey Sweet's The Action Against Sol Schumann, Kristine Thatcher's Voice of Good Hope, Charles Smith's Jelly Belly, Steve Carter's Pecong, Claudia Allen's Deed of Trust, and Douglas Post's Earth and Sky.

Theatre Building Chicago formerly had an ongoing program for the development of new musicals until being taken over by Stage 773 in 2010.

Polish language productions for Chicago's large Polish speaking population can be seen at the historic Gateway Theatre in Jefferson Park.

Oracle Theatre offers public access theater in Chicago sustained by the donations, where the seats are free and open to anyone.[7]

Chicago is home to both non-union and union theater companies. Union shows adhere to strict contracts for all artists involved (e.g., performers, directors, musicians, playwrights, stage managers, et cetera). Artistic trade unions such as Actors' Equity, commonly known simply as "Equity," and the Stage Directors and Choreographers Society bargain for contracts guaranteeing minimum wages and other rights involved with the rehearsal and production process. Shows may run for a varying number of weeks, depending on ticket sales. Musicals tend to have longer runs than do stage plays. The majority of theaters in Chicago are located on the city's North Side and in the Loop.

Both Actor's Equity and non-Equity productions in the Chicago area receive honors from the Joseph Jefferson (or Jeff) Awards, awarded by a panel of volunteer judges.