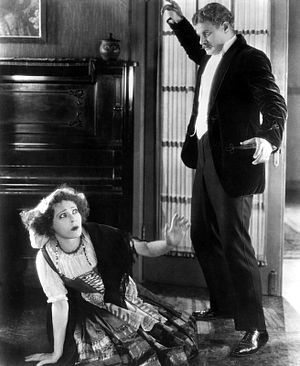 Scene from A Doll's House, a 1922 silent film starring Alla Nazimova and Alan Hale, Sr. The author of the original play, Henrik Ibsen, was an influential exponent of theatrical realism.

Theatrical realism was a general movement that began in the 19th-century theatre, around the 1870s, and remained present through much of the 20th century. It developed a set of dramatic and theatrical conventions with the aim of bringing a greater fidelity of real life to texts and performances. Part of a broader artistic movement, it shared many stylistic choices with naturalism, including a focus on everyday (middle-class) drama, ordinary speech, and ordinary settings. Realism and naturalism diverge chiefly on the degree of choice that characters have: while naturalism believes in the overall strength of external forces over internal decisions, realism asserts the power of the individual to choose (see A Doll's House).

Russia's first professional playwright, Aleksey Pisemsky, along with Leo Tolstoy (in his The Power of Darkness of 1886), began a tradition of psychological realism in Russia. A new type of acting was required to replace the declamatory conventions of the well-made play with a technique capable of conveying the speech and movements found in the domestic situations of everyday life. This need was supplied by the innovations of the Moscow Art Theatre, founded by the actor-director Constantin Stanislavski along with his impresario colleague Vladimir Nemirovich-Danchenko.[1] Whereas the subtle expression of emotion in Anton Chekhov's The Seagull through everyday small-talk had initially gone unappreciated in an old-fashioned production in St Petersburg, a new staging by the Moscow Art Theatre brought the play and its author, as well as the company, immediate success.[2] A logical development was to take the revolt against theatrical artifice a step further in the direction of naturalism, and Stanislavski, especially in his production of Maxim Gorky's The Lower Depths, helped this movement achieve international recognition.[1] While the emphasis on truthfulness in Stanislavski's system of acting is in keeping with the underlying thrust of naturalism, Stanislavski stressed that his own aims were quite distinct, focusing on "the truth of feeling and experience" rather than on what he called "an outward and coarse naturalism" (a trait which he felt emerged in some of the company's productions only because of a relative lack of experience).[2][n 1] The Moscow Art Theatre's ground-breaking productions of plays by Chekhov, such as Uncle Vanya and The Cherry Orchard, in turn influenced Maxim Gorky and Mikhail Bulgakov. Stanislavski went on to develop his 'system', a form of actor training that is particularly well-suited to psychological realism.

19th-century realism is closely connected to the development of modern drama, which, as Martin Harrison explains, "is usually said to have begun in the early 1870s" with the "middle-period" work of the Norwegian dramatist Henrik Ibsen. Ibsen's realistic drama in prose has been "enormously influential."[4]

In opera, verismo refers to a post-Romantic Italian tradition that sought to incorporate the naturalism of Émile Zola and Henrik Ibsen. It included realistic – sometimes sordid or violent – depictions of contemporary everyday life, especially the life of the lower classes.