From Infogalactic: the planetary knowledge core
Jump to: navigation, search
For the ancient capital of Boeotia, see Thebes, Greece. For other cities called Thebes, see Thebes.

Thebes (Ancient Greek: Θῆβαι, Thēbai), known to the ancient Egyptians as Waset, was an ancient Egyptian city located east of the Nile about 800 kilometers (500 mi) south of the Mediterranean. Its ruins lie within the modern Egyptian city of Luxor. Karnak and the necropolis of ancient Thebes lie nearby on the Nile's west bank. Waset was a Scepter nome, and it was the main city of the fourth Upper Egyptian nome. It was close to Nubia and the eastern desert, with their valuable mineral resources and trade routes. The site of Thebes includes areas on both the eastern bank of the Nile, where the temples of Karnak and Luxor stand, and the western bank, where are the large private and royal cemeteries and funerary complexes.

The Ancient Egyptians originally knew Thebes as Waset (wꜣs.t), the "City of the Was". A was was the scepter of the pharaohs, a long staff with an animal's head and a forked base.

Thebes is the latinized form of the Greek Thebai, the hellenized form of the Demotic Egyptian Ta-pe. This was the local name not for the city itself but for the Karnak temple complex beside the necropolis on the west bank of the river. (Ta-opet in formal Egyptian.) As early as Homer's Iliad,[1] the Greeks distinguished the Egyptian Thebes as Thebes of the Hundred Gates,[n 1] (Θῆβαι ἑκατόμπυλοι, Thēbai hekatómpyloi) as opposed to the "Thebes of the Seven Gates" (Θῆβαι ἑπτάπυλοι, Thēbai heptapyloi) in Boeotia in Greece.[n 2]

From the end of the New Kingdom, Thebes was known in Egyptian as Niwt-Imn, the "City of Amun". Amun was the chief of the Theban Triad of gods whose other members were Mut and Khonsu. This name appears in the Bible as the "Nōʼ ʼĀmôn" (נא אמון) of the Book of Nahum[3] and probably also as the "No" (נא) mentioned in Ezekiel[4] and Jeremiah.[5] In the interpretatio graeca, Amun was seen as a form of Zeus. The name was therefore translated into Greek as Diospolis, the "City of Zeus". To distinguish it from the numerous other cities by this name, it was known as the Great Diospolis (μεγάλη Διόσπολις, megálē Dióspolis; Latin: Diospolis Magna). The Greek names came into wider use after the conquest of Egypt by Alexander the Great, when the country came to be ruled by the Macedonian Ptolemaic dynasty. 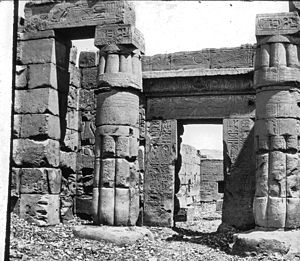 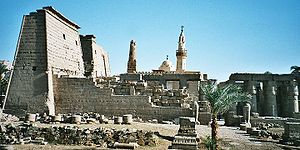 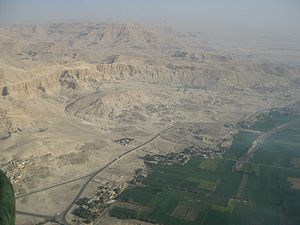 Thebes was inhabited from around 3200 BC.[9] It was the eponymous capital of Waset, the fourth Upper Egyptian nome. Waset was the capital of Egypt during part of the 11th Dynasty (Middle Kingdom) and most of the 18th Dynasty (New Kingdom), when Hatshepsut built a Red Sea fleet to facilitate trade between Thebes Red Sea port of Elim, modern Quasir, and Elat at the head of the Gulf of Aqaba. According to George Modelski, Thebes had about 40,000 inhabitants in 2000 BC (compared to 60,000 in Memphis, the largest city of the world at the time). By 1800 BC, the population of Memphis was down to about 30,000, making Thebes the largest city in Egypt at the time. By the Amarna period (14th century BC), Thebes may have grown to be the largest city in the world, with a population of about 80,000, a position which it held until about 1000 BC, when it was again surpassed by Memphis (among others).[10]

With the 19th Dynasty the seat of government moved to the Delta. The archaeological remains of Thebes offer a striking testimony to Egyptian civilization at its height. The Greek poet Homer extolled the wealth of Thebes in the Iliad, Book 9 (c. 8th Century BC): "... in Egyptian Thebes the heaps of precious ingots gleam, the hundred-gated Thebes."

In 664 BC, the Assyrian army sacked Thebes during their invasion of Upper Egypt. 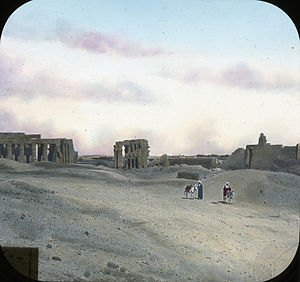 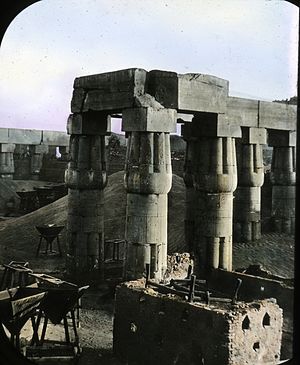