From Infogalactic: the planetary knowledge core
Jump to: navigation, search
This article is about the medieval class or rank. For other uses, see thane (disambiguation). 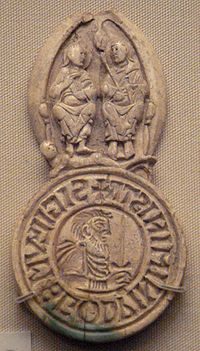 Seal of Godwin the thegn (minister), first half of 11th century. British Museum.
File:Map of thegn runestones.jpg
Map of Scandinavia indicating with a red dot the location of runestones describing the deceased as a thegn. Blue dots indicate stones that mention the junior position "drengr".

The term thegn (thane or thayn in Shakespearean English), from Old English þegn, ðegn, "servant, attendant, retainer", "one who serves",[1] is commonly used to describe either an aristocratic retainer of a king or nobleman in Anglo-Saxon England, or, as a class term, the majority of the aristocracy below the ranks of ealdormen and high-reeves. It is also the term for an early medieval Scandinavian class of retainers.

The thegn had a military significance, and its usual Latin translation was miles, meaning soldier, although minister was often used. Joseph Bosworth[3] describes a thegn as "one engaged in a king's or a queen's service, whether in the household or in the country", and adds: "the word in this case seems gradually to acquire a technical meaning, and to become a term denoting a class, containing, however, several degrees".

But, like all other words of the kind, the word thegn was slowly changing its meaning, and, "the very name, like that of the gesith, has different senses in different ages and kingdoms, but the original idea of military service runs through all the meanings of thegn, as that of personal association is traceable in all the applications of gesith". After the Norman conquest of England in 1066, William the Conqueror replaced the Anglo-Saxon aristocracy with Normans and the new Norman ruling class replaced the Anglo-Saxon terminology with Norman. In this process, king's thegns became barons, and thegns appear to have been merged in the class of knights.[4]

The precursor of the thegn was the gesith, the companion of the king or great lord, a member of his comitatus, and the word thegn began to be used to describe a military gesith.[5]

It is only used once in the laws before the time of Aethelstan (c. 895-940), but more frequently in the charters. H. M. Chadwick says that "the sense of subordination must have been inherent in the word from the earliest time",[6] but it has no connection with the German/Dutch dienen, to serve. In the course of time it extended its meaning and was more generally used. The thegn became a member of a territorial nobility, and the dignity of thegnhood was attainable by those who fulfilled certain conditions. The nobility of pre-Conquest England was ranked according to the heriot they paid in the following descending order: earl, king's thegn, median thegn. In Anglo-Saxon hierarchic society, a king's thegn attended in person upon the king, bringing with him his men and resources. A "median" thegn did not hold his land directly from the king but through an intermediary lord.

The thegn was inferior to the ætheling, the member of a kingly family, but he was superior to the ceorl, and, says Chadwick, "from the time of Æthelstan the distinction between thegn and ceorl was the broad line of demarcation between the classes of society". His status is shown by his weregild. Over a large part of England this was fixed at 1200 shillings, or six times that of the ceorl. He was the twelfhynde man of the laws, sharply divided from the twyhynde man or ceorl.

In a document known as Geþyncðo we learn: "And if a ceorl throve, so that he had fully five hides of his own land, church and kitchen, bellhouse and burh-gate-seat, and special duty in the king's hail, then was he thenceforth of thegn-right worthy."[7] A hide of land was considered sufficient to support a family. And again—"And if a merchant throve, so that he fared thrice over the wide sea by his own means, then was he thenceforth of thegn-right worthy."[7] In a similar manner a successful thegn might hope to become an earl. In addition to the thegns there were others who were thegns on account of their birth, and thus thegnhood was partly inherited and partly acquired.

The twelve senior thegns of the hundred play a part, the nature of which is rather doubtful, in the development of the English system of justice. By a law of Aethelred they "seem to have acted as the judicial committee of the court for the purposes of accusation,"[8] and thus they have some connection with the grand jury of modern times.

The increase in the number of thegns produced in time a subdivision of the order. There arose a class of king's thegns, corresponding to the earlier thegns, and a larger class of inferior thegns, some of them the thegns of bishops or of other thegns. A king's thegn was a person of great importance, the contemporary idea being shown by the Latin translation of the words as comes (compare "count"). He had certain special privileges. No one save the king had the right of jurisdiction over him, while by a law of Canute we learn that he paid a larger heriot than an ordinary thegn.

In Domesday Book, OE þegn has become tainus in the Latin form, but the word does not imply high status. Domesday Book lists the taini who hold lands directly from the king at the end of their respective counties, but the term became devalued, partly because there were so many thegns.

Compare the separate development of the concept of "vassal", from a warlord's henchman to one of Charlemagne's great companions.

During the later part of the 10th and in the 11th centuries, it became common for families or comrades to raise memorial runestones, and approximately fifty of these note that the deceased was a thegn. Examples of such runestones include Sö 170 at Nälberga, Vg 59 at Norra Härene, Vg 150 at Velanda, DR 143 at Gunderup, DR 209 at Glavendrup, and DR 277 at Rydsgård.