The Theil index is a statistic primarily used to measure economic inequality,[1] though it has also been used to measure racial segregation.[2] The basic Theil index TT is the same as redundancy in information theory which is the maximum possible entropy of the data minus the observed entropy. It is a special case of the generalized entropy index. It can be viewed as a measure of redundancy, lack of diversity, isolation, segregation, inequality, non-randomness, and compressibility. It was proposed by econometrician Henri Theil at the Erasmus University Rotterdam.

The Theil index is[3]

is the mean of

, which is maximum order. Dividing TT by

can normalize the equation to range from 0 to 1.

The Theil index measures an entropic "distance" the population is away from the "ideal" egalitarian state of everyone having the same income. The numerical result is in terms of negative entropy so that a higher number indicates more order that is further away from the "ideal" of maximum disorder. Formulating the index to represent negative entropy instead of entropy allows it to be a measure of inequality rather than equality.

The Theil index is derived from Shannon's measure of information entropy

, where entropy is a measure of randomness in a given set of information. In information theory, physics, and the Theil index, the general form of entropy is

is the probability of finding member

from a random sample of the population. In physics,

and the log base is 2. In physics and also in computation of Theil index, the natural logarithm is chosen as the logarithmic base. When

is chosen to be income per person

, it needs to be normalized by dividing by the total population income,

. This gives the observed entropy

of a population to be:

The Theil index is

is the theoretical maximum entropy that is reached when all incomes are equal, i.e.

. This is substituted into

, a constant determined solely by the population. So the Theil index gives a value in terms of an entropy that measures how far

is away from the "ideal"

. The index is a "negative entropy" in the sense that it gets smaller as the disorder gets larger, hence it is a measure of order rather than disorder.

is in units of population/species,

is a measure of biodiversity and is called the Shannon index. If the Theil index is used with x=population/species, it is a measure of inequality of population among a set of species, or "bio-isolation" as opposed to "wealth isolation".

The Theil index measures what is called redundancy in information theory.[3] It is the left over "information space" that was not utilized to convey information, which reduces the effectiveness of the price signal. The Theil index is a measure of the redundancy of income (or other measure of wealth) in some individuals. Redundancy in some individuals implies scarcity in others. A high Theil index indicates the total income is not distributed evenly among individuals in the same way an uncompressed text file does not have a similar number of byte locations assigned to the available unique byte characters.

If for the Theil index the population is divided into

is the Theil index for that subgroup, and

is the average income in group

, then the Theil index is 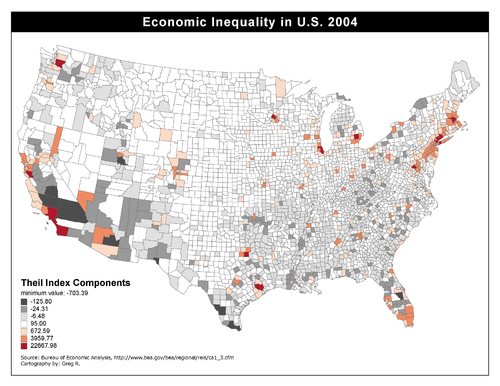 The decomposition of the overall Theil index which identifies the share attributable to the between-region component becomes a helpful tool for the positive analysis of regional inequality as it suggests the relative importance of spatial dimension of inequality.[4]

The decomposability is a property of the Theil index which the more popular Gini coefficient does not offer. The Gini coefficient is more intuitive to many people since it is based on the Lorenz curve. However, it is not easily decomposable like the Theil.

In addition to multitude of economic applications, the Theil index has been applied to assess performance of irrigation systems[5] and distribution of software metrics.[6]