From Infogalactic: the planetary knowledge core
Jump to: navigation, search
This article is about the Dutch artist. For the Dutch footballer, see Theo Janssen.

Theo Jansen (Dutch pronunciation: [ˈteːoː ˈjɑnsən]; born 14 March 1948) is a Dutch artist. In 1990, he began what he is known for today: building large mechanisms out of PVC that are able to move on their own, known only as Strandbeest. His animated works are a fusion of art and engineering; in a car company (BMW) television commercial Jansen says: "The walls between art and engineering exist only in our minds." He strives to equip his creations with their own artificial intelligence so they can avoid obstacles by changing course when one is detected, such as the sea itself.

Jansen was born in Scheveningen in the Netherlands. He grew up with a knack for both physics and art, and studied physics at the University of Delft. Jansen left the University in 1974 without a degree.[1] While at Delft, Jansen was involved in many projects that involved both art and technology, including a paint machine and a UFO.

Before the Strandbeest: a UFO

Before Jansen began his life's work of building mechanical animals out of PVC (Polyvinyl chloride), he undertook a project that would inspire him to use PVC on other projects. This project, a UFO (a project which his website states: "caused a near-riot"),[2] was a prank, combining art and technology in a UFO.

The UFO: In 1979 Jansen started using PVC pipes (which were very cheap) to build a 4 meter wide flying saucer that was filled with helium. It was launched over Delft in 1980 on a day when the sky was hazy. Light and sound came from the saucer. Because the saucer was black against a light sky, its size was hard to guess. The police even said it was 30 meters wide and some people swore they saw a halo around it. He said [2] that they never found it and that it had probably landed somewhere in Belgium. He later redid the project over Paris.

Before the Strandbeest: a painting machine

The painting machine was a somewhat bigger project than the UFO, developed in 1984–86 in Delft. It consisted of a tube with a light cell situated at its end, which when darkness 'hit' it would start spraying. This created paintings of the silhouettes of the things/people who were standing in front of it. This machine was attached to a large piece of wood and hoisted against a wall where it would move back and forth and create 2D images of everything in the room.[3] 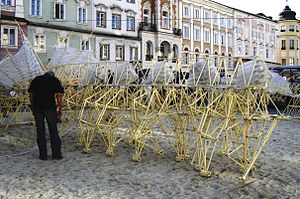 A Jansen "beach beast", exhibited on the Linz city square during Ars Electronica, 2005

Jansen has been creating Strandbeest (Dutch: strand=beach; beest=beast), wind-walking examples of artificial life, since 1990. What was at first a rudimentary breed has slowly evolved into a generation of machines that are able to react to their environment: "over time, these skeletons have become increasingly better at surviving the elements such as storms and water, and eventually I want to put these animals out in herds on the beaches, so they will live their own lives."

Constructed as intricate assemblages of piping, wood, and wing-like sails, Jansen's creations are constantly being improved and have become excellently adapted to their sandy beach environment. The creations sport legs, which "prove to be more efficient on sand than wheels...they don’t need to touch every inch of the ground along the way, as a wheel has to".

The creations are also able to store air pressure and use it to drive them in the absence of wind: "Self-propelling beach animals like Animaris Percipiere have a stomach. This consists of recycled plastic bottles containing air, that can be pumped up to a high pressure by the wind." Theo's more sophisticated creations are able to detect once they have entered water and walk away from it, and one model will even anchor itself to the earth if it senses a storm approaching.

Since 1990 Theo Jansen has been occupied with the making of a new nature. Not pollen or seeds but plastic yellow tubes are used as the basic material of this new nature. He makes skeletons which are able to walk on the wind. Eventually he wants to put these animals out in herds on the beaches, so they will live their own lives (sourced in TED video).[4]