Theobalds House (also known as Theobalds Palace), located in Cedars Park near Cheshunt in the English county of Hertfordshire, was a significant stately home and (later) royal palace of the 16th and early 17th centuries, before being demolished as a result of the English Civil War. It was a leading example of the Elizabethan prodigy house.

Rebuilt in the Georgian era it is now a hotel and conference venue known as Theobalds Park, and is a Grade II* listed building.[1] [2] 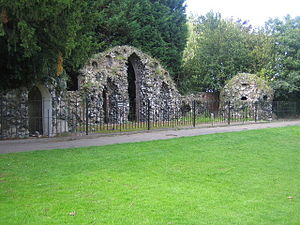 Ruins of walls and entranceways are all that remain today of the former Theobalds Palace.

The manor was originally called Cullynges, later Tongs (after William de Tongge), and since 1440, Thebaudes, Tibbolds and finally Theobalds. The original manor house was surrounded by a moat.[3] In 1563 it was bought by Lord Burghley, senior councillor of Elizabeth I.

Lord Burghley commissioned a grand new house which was built between 1564 and 1585. Burghley's intention in building the mansion was partly to demonstrate his increasingly dominant status at the Royal Court, and also to provide a palace fine enough to accommodate the Queen on her visits.[4] The formal gardens of the house were modelled after the Château de Fontainebleau in France, the English botanist John Gerard acting as their superintendent. The Queen visited eight times between 1572 and 1596. The location was ideal in that it lay just off the main road north from London to Ware, a day's journey from London and thus an ideal stop at the end of the first day of a Royal tour.

Robert Cecil inherited the house and arranged for the new king James I to visit in 1603 and receive homage from the Privy Council. In 1606 Cecil entertained James and his brother-in-law King Christian IV of Denmark at Theobalds. Both monarchs were notoriously heavy drinkers, and according to some of those present, the occasion was simply an orgy of drunkenness, as few English or Danish courtiers had their rulers' capacity to hold their drink: an attempt to put on a masque of Solomon and Sheba descended into farce, as most of the players were too inebriated to remember their lines, or even to stand up.

In 1607 King James I acquired Theobalds in exchange for Hatfield Palace, also in Hertfordshire, and it quickly became one of the King's favourite country seats. He eventually died within its walls on March 27, 1625. After the execution in 1649 of his son, Charles I, Theobalds was listed, amongst other royal properties, for demolition and disposal by the Commonwealth. This was achieved speedily and by the end of 1650 the house was largely demolished. After the Restoration the estate was granted to George Monck, 1st Duke of Albemarle, but reverted to the crown after the death of the 2nd Duke of Albemarle, who left no heir. 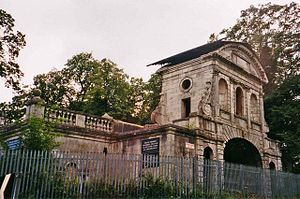 The Temple Bar in Theobalds Park before 2001

It was then given by King William III to William Bentinck, 1st Earl of Portland and descended in that family until sold in 1762 by 3rd Duke of Portland to George Prescott, a merchant and MP. Prescott built a Georgian style mansion known as The Cedars about a mile to the north west of the original palace.

The Cedars passed from the Prescott family to the Meux family of Meux's Brewery fame in about 1820, and they made extensive alterations and added extensions during the 19th century. These included a remodelled entrance based on Sir Christopher Wren's Temple Bar, which had been dismantled and stored in a yard at Farringdon Road. In 1888, it caught the eye of Lady Meux (formerly a banjo-playing barmaid); the gateway was purchased from the City of London and the 400 tons of stone was transported by horse-drawn carts to The Cedars, where it was carefully rebuilt at a cost of £10,000.[5] Lady Meux often entertained in the gateway's upper chamber; guests included King Edward VII and Winston Churchill.[6] 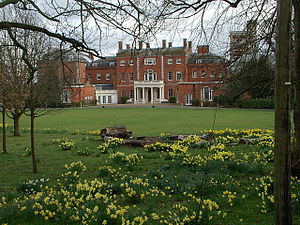 In 1910 the estate was inherited by Admiral The Hon Sir Hedworth Meux, a member of the aristocratic Lambton family who changed his surname as a condition of inheritance. After his death in 1929, the house was a hotel for some years. During World War II, the house was used by the Royal Artillery and then by the Metropolitan Police as a riding school. In 1955 it became a secondary school and after 1969, an adult education centre. In the 1990s it was refurbished for use as a commercial conference centre and later converted to its current (2015) status as the Theobalds Park Hotel in the De Vere Venues chain.[7]

The Temple Bar had remained in the hands of the trustees of the Meux family estate and despite its status as a Scheduled Ancient Monument, had lapsed into decay. After a long campaign, it was decided to return it to the City in 2001. The arch was again dismantled, and was reconstructed on a site next to St Paul’s Cathedral. The project was completed in November 2004,[8] and a commemorative plaque was placed in Theobalds Park.[9]