From Infogalactic: the planetary knowledge core
Jump to: navigation, search
This article is about the historian. For the bishop and biblical commentator of the same name, see Theophylact of Ohrid. 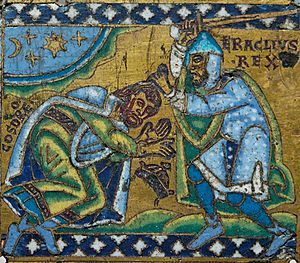 Byzantine Emperor Heraclius receiving the submission of the Sassanid king Khosrau II – during Simocatta's times (plaque from a cross. Champlevé enamel over gilt copper, 1160–1170, Meuse Valley). Housed at the Louvre.

Simocatta is best known as the author of a history in eight books, of the reign of the emperor Maurice (582–602), for which period he is the best and oldest authority. However, his work is of lesser stature than that of Procopius and his self-consciously classicizing style is pompous, but he is an important source of information concerning the seventh-century Slavs, the Avars and the Persians, and the emperor's tragic end.[3] He mentions the war of Heraclius against the Persians (610–28), but not that against the Arabs (beginning 634), so it is likely that he was writing around 630. Among his sources he used the history of John of Epiphania.

His want of judgement renders him diffuse in trifles and concise in the most interesting facts.[4]

This notwithstanding, Simocatta's general trustworthiness is admitted. The history contains an introduction in the form of a dialogue between History and Philosophy.

Nicolaus Copernicus translated Greek verses by Theophylact into Latin prose and had his translation, dedicated to his uncle Lucas Watzenrode, published in Kraków in 1509 by Johann Haller. It was the only book that Copernicus ever brought out on his own account.[5]

Simocatta was also the author of Physical Problems, a work on natural history,[6] and of a collection of 85 essays in epistolary form.[7]