Theresa Anne Villiers (born 5 March 1968 in London) is a British Conservative Party politician, who hails from the aristocratic Villiers family.

Villiers has been the Member of Parliament (MP) for Chipping Barnet since 2005 and the Secretary of State for Northern Ireland since 2012.[1][2] 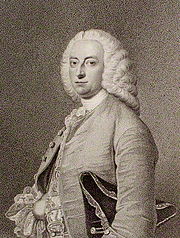 Villiers was born in Chiswick in 1968, the third child of Major George Edward Villiers by his marriage to Anne Virginia Threlfall, and she has two older brothers, Edward and Henry.[3] On her father's side she is a descendant of Edward Ernest Villiers (1806–1843), brother of George Villiers, 4th Earl of Clarendon, Thomas Hyde Villiers, Charles Pelham Villiers, and Henry Villiers.[4] She is also a distant relative of the actor James Villiers and George Villiers, 1st Duke of Buckingham and the fifth great-granddaughter of Thomas Villiers, 1st Earl of Clarendon.

Theresa Villiers is also a direct descendant of the prominent families of Howard and Woodville in the Tudor period, and thereby from King Edward I. She is also a maternal great-granddaughter of the eminent chemist Sir Richard Threlfall.

Growing up in North London, she was educated at the independent Francis Holland School. Villiers gained a Bachelor of Laws (LLB) degree with first class honours in 1990 from the University of Bristol, and a year later the postgraduate degree of Bachelor of Civil Law (BCL) from Jesus College, Oxford.

After university she qualified for the bar at the Inner Temple, and worked as a lecturer at King's College London from 1994 until 1999.

Villiers was elected Member of the European Parliament (MEP) for the London constituency in 1999, and was re-elected in 2004. She stood down after the 2005 general election when she was elected as the Member of Parliament for Chipping Barnet.[5]

As an MEP, her main interests were finance and financial services, the preservation of London's green belt, Cyprus, animal welfare and campaigning against the euro and the European Constitution. She served as Deputy Leader of the Conservatives in the European Parliament between 2001 and 2002. She also served as a member of the governing board of the Conservative Party during this period.

In 2003, following Sir Sydney Chapman's announcement that he would retire at the following election, Villiers was selected as the Conservative prospective parliamentary candidate for Chipping Barnet. Although Chapman's majority at the 2001 general election had been only 2,701, the party viewed Chipping Barnet to be quite a "safe" Conservative seat, and Villiers held it at the 2005 general election with an increased majority of 5,960, which increased again to 11,927 in 2010. On election to Westminster she resigned her seat in the European Parliament, and it went to Syed Kamall, the next candidate on the Conservatives' regional list for London. She now lives at Arkley in her constituency, as well as at Hillsborough Castle.

In December 2005, following the election of David Cameron as Conservative leader, Villiers was promoted to the Shadow Cabinet after just seven months in parliament, as Shadow Chief Secretary to the Treasury. In July 2007, Cameron promoted her to Shadow Secretary of State for Transport.

Following the 2010 general election, the Conservatives, short of an overall majority, formed a coalition government with the Liberal Democrats. This required positions in Cabinet to be awarded to LibDem MPs, so Villiers did not become Secretary of State for Transport as may have been expected in the event of a majority Conservative government taking office. That role went instead to Philip Hammond, who had shadowed the post of Chief Secretary to the Treasury. Villiers instead became a Minister of State at the Department for Transport.[7] 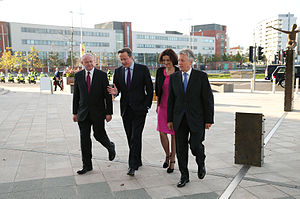 At the NI Investment Conference 2013 in Belfast, with Martin McGuinness, David Cameron and Peter Robinson

Villiers was appointed Secretary of State for Northern Ireland in September 2012 but will continue to spend three days a week in her North London constituency of Chipping Barnet.[8]

She also has a house in Arkley in her north London constituency of Chipping Barnet. The house, a semi-detached property that she bought for £296,500 in May 2004, is an 8-minute drive away from High Barnet tube station, from which commuters can reach Westminster in about 45 minutes.[9]

Villiers supported the temporary suspension of Ken Livingstone, then Mayor of London, by the Adjudication Panel for England, which examined the case after a complaint from the Board of Deputies of British Jews to the Standards Board for England. Villiers is a member of Conservative Friends of Israel.[10]

Since late September 2008, Villiers has dedicated a considerable proportion of her public announcements to aviation policy, specifically the expansion of airports in the South East of England. Villiers underlined that despite differences of opinion, the Coalition government's policy was opposed to a third runway.[11]

She has also spoken out against Boris Johnson's favoured proposal for a new London airport to be built in the Thames Estuary, and alternative expansions at Gatwick and Stansted airports, arguing that airlines should make greater use of the UK's regional airports, though some regional airports themselves have expressed concern about being adversely affected by capacity shortages in the south-east [12] Villiers favours a high-speed rail link from London to Birmingham and Manchester, arguing that flyers could use capacity at airports such as Birmingham International and Manchester International Airport.

Villiers married fellow barrister Sean Wilken in 1997,[4] and the following year they co-wrote a book on matters of contract and quasi-contract law, which was published by a major publishing house. [13] They are now divorced.[14]