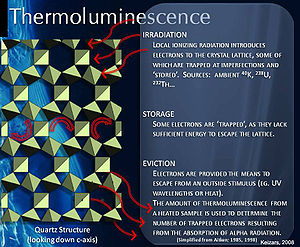 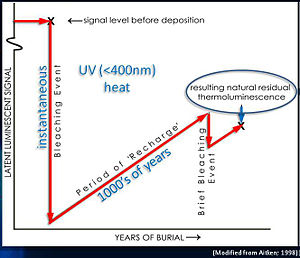 Figure 2: The process of recharging and discharging thermoluminescent signal, as applied to beach sands. (modified from Aitken, 1998; Keizars, 2008a) 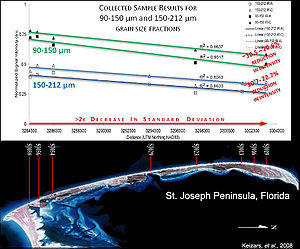 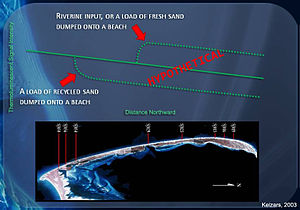 The technique has wide application, and is relatively cheap at some US$300–700 per object; ideally a number of samples are tested. Sediments are more expensive to date.[1] The destruction of a relatively significant amount of sample material is necessary, which can be a limitation in the case of artworks. The heating must have taken the object above 500C, which covers most ceramics, although very high-fired porcelain creates other difficulties. It will often work well with stones that have been heated by fire. The clay core of bronze sculptures made by lost wax casting can also be tested.[2]

Different materials vary considerably in their suitability for the technique, depending on several factors. Subsequent irradiation, for example if an x-ray is taken, can affect accuracy, as will the "annual dose" of radiation a buried object has received from the surrounding soil. Ideally this is assessed by measurements made at the precise findspot over a long period. For artworks, it may be sufficient to confirm whether a piece is broadly ancient or modern (that is, authentic or a fake), and this may be possible even if a precise date cannot be estimated.[3]

The flux of ionizing radiation—both from cosmic radiation and from natural radioactivity—excites electrons from atoms in the crystal lattice into the conduction band where they can move freely. Most excited electrons will soon recombine with lattice ions, but some will be trapped, storing part of the energy of the radiation in the form of trapped electric charge (Figure 1).

Depending on the depth of the traps (the energy required to free an electron from them) the storage time of trapped electrons will vary as some traps are sufficiently deep to store charge for hundreds of thousands of years.

In thermoluminescence dating, these long-term traps are used to determine the age of materials: When irradiated crystalline material is again heated or exposed to strong light, the trapped electrons are given sufficient energy to escape. In the process of recombining with a lattice ion, they lose energy and emit photons (light quanta), detectable in the laboratory.

The amount of light produced is proportional to the number of trapped electrons that have been freed which is in turn proportional to the radiation dose accumulated. In order to relate the signal (the thermoluminescence—light produced when the material is heated) to the radiation dose that caused it, it is necessary to calibrate the material with known doses of radiation since the density of traps is highly variable.

As time goes on, the ionizing radiation field around the material causes the trapped electrons to accumulate (Figure 2). In the laboratory, the accumulated radiation dose can be measured, but this by itself is insufficient to determine the time since the zeroing event.

The Radiation Dose Rate - the dose accumulated per year-must be determined first. This is commonly done by measurement of the alpha radioactivity (the uranium and thorium content) and the potassium content (K-40 is a beta and gamma emitter) of the sample material.

Often the gamma radiation field at the position of the sample material is measured, or it may be calculated from the alpha radioactivity and potassium content of the sample environment, and the cosmic ray dose is added in. Once all components of the radiation field are determined, the accumulated dose from the thermoluminescence measurements is divided by the dose accumulating each year, to obtain the years since the zeroing event.

Thermoluminescence dating is used for material where radiocarbon dating is not available, like sediments. Its use is now common in the authentication of old ceramic wares, for which it gives the approximate date of the last firing. An example of this can be seen in Rink and Bartoll, 2005.

Thermoluminescence dating was modified for use as a passive sand migration analysis tool by Keizars, et al., 2008 (Figure 3), demonstrating the direct consequences resulting from the improper replenishment of starving beaches using fine sands, as well as providing a passive method of policing sand replenishment and observing riverine or other sand inputs along shorelines (Figure 4). 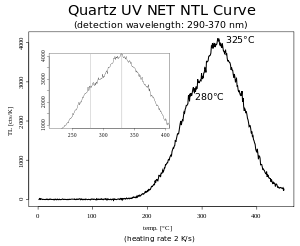 Optical dating is a related measurement method which replaces heating with exposure to intense light. The sample material is illuminated with a very bright source of infrared light (for feldspars) or green or blue light (for quartz). Ultraviolet light emitted by the sample is detected for measurement.