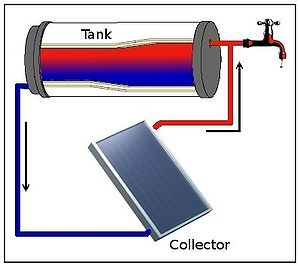 Thermosiphon (alt. thermosyphon) is a physical effect and refers to a method of passive heat exchange based on natural convection, which circulates a fluid without the necessity of a mechanical pump. Thermosiphoning is used for circulation of liquids and volatile gases in heating and cooling applications, such as heat pumps, water heaters, boilers and furnaces. Thermosiphoning also occurs across air temperature gradients such as those utilized in a wood fire chimney, or solar chimney.

This circulation can either be open-loop, as when the substance in a holding tank is passed in one direction via a heated transfer tube mounted at the bottom of the tank to a distribution point—even one mounted above the originating tank—or it can be a vertical closed-loop circuit with return to the original container. Its purpose is to simplify the transfer of liquid or gas while avoiding the cost and complexity of a conventional pump.

Convective movement of the liquid starts when liquid in the loop is heated, causing it to expand and become less dense, and thus more buoyant than the cooler liquid in the bottom of the loop. Convection moves the heated liquid upwards in the system as it is simultaneously replaced by cooler liquid returning by gravity. Ideally, the liquid flows easily because a good thermosiphon should have very little hydraulic resistance.

In some situations the flow of liquid may be reduced further, or stopped, perhaps because the loop is not entirely full of liquid. In this case, the system no longer convects, so it is not a usual "thermosiphon".

Heat can still be transferred in this system by the evaporation and condensation of vapor; however, the system is properly classified as a heat pipe thermosyphon.[1][2] If the system also contains other fluids, such as air, then the heat flux density will be less than in a real heat pipe, which only contains a single fluid.

The thermosiphon has been sometimes incorrectly described as a 'gravity return heat pipe'.[3] Heat pipes usually have a wick to return the condensate to the evaporator via capillary action. A wick is not needed in a thermosiphon because gravity moves the liquid.[4] The wick allows heat pipes to transfer heat when there is no gravity, which is useful in space. A thermosiphon is "simpler" than a heat pipe.[5]

(Single-phase) thermosiphons can only transfer heat "upward", or away from the acceleration vector. Thus, orientation is much more important for thermosiphons than for heatpipes. Also, thermosiphons can fail because of a bubble in the loop, and require a circulating loop of pipes.

If the piping of a thermosiphon resists flow, or excessive heat is applied, the liquid may boil. Since the gas is more buoyant than the liquid, the convective pressure is greater. This is a well known invention called a reboiler. A group of reboilers attached to a pair of plena is called a calandria.

The term "phase change thermosiphon" is a misnomer and should be avoided.[citation needed] When phase change occurs in a thermosiphon, it means that the system either does not have enough fluid, or it is too small to transfer all of the heat by convection alone. To improve the performance, either more fluid is needed (possibly in a larger thermosiphon), or all other fluids (including air) should be pumped out of the loop. 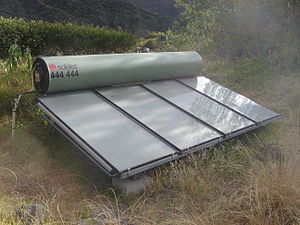 Thermosiphons are used in some liquid-based solar heating systems to heat a liquid such as water. The water is heated passively by solar energy and relies on heat energy being transferred from the sun to a solar collector. The heat from the collector can be transferred to water in two ways: directly where water circulates through the collector, or indirectly where an anti-freeze solution carries the heat from the collector and transfers it to water in the tank via a heat exchanger. Convection allows for the movement of the heated liquid out of the solar collector to be replaced by colder liquid which is in turn heated. Due to this principle, it is necessary for the water to be stored in a tank above the collector[6]

Thermosiphons are used in computing[7] to describe a system for watercooling the internal computer components, most commonly referring to the processor. While any suitable liquid can be used, water is the easiest liquid to use in thermosiphon systems. Unlike traditional watercooling systems, thermosiphon systems do not rely on a water pump (or a pump for other liquids) but rely on convection for the movement of heated water (which may become vapour) from the components upwards to a heat exchanger. There the water is cooled and is ready to be recirculated. The most commonly used heat exchanger is a radiator where air is blown actively through a fan system to condense the vapour to a liquid. The liquid is recirculated through the system, thus repeating the process. No pump is required—the vaporization and condensation cycle is self-sustaining.

Thermosiphons must be mounted such that vapor rises up and liquid flows down to the boiler with no bends in the tubing for liquid to pool. Also, the thermosiphon’s fan that cools the gas needs cool air to operate. The system as well has to be completely air tight, if not the process of thermosiphon will not take effect and cause the water to only evaporate over a small period of time. If it the system is air-tight, the water will not evaporate because there is no oxygen for it to evaporate into. 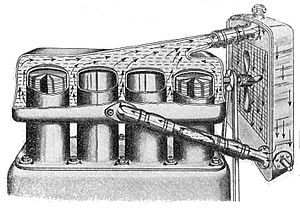 Early cars and motor vehicles used thermosiphon circulation to move cooling water between their cylinder block and radiator. As engine power increased, increased flow was required and so engine-driven pumps were added to assist circulation. More compact engines then used smaller radiators and required more convoluted flow patterns, so the circulation became entirely dependent on the pump and might even be reversed against the natural circulation. An engine cooled only by thermosiphon is also very sensitive to low coolant level, i.e., losing only a small amount of coolant stops the circulation; a pump driven system is much more robust and can typically handle a lower coolant level.