The Thessaloniki International Film Festival (TIFF; Greek: Διεθνές Φεστιβάλ Κινηματογράφου Θεσσαλονίκης, Diethnes Festival Kinimatografou Thessalonikis) has become one of the Balkans' primary showcases for the work of new and emerging filmmakers. The event features the International Section, a panorama of Greek films, the New Horizons program, the Balkan Survey, and numerous retrospectives and tributes to leading figures in the world of film. The Festival is competitive with the International Section jury awarding several prizes each year, most notably the "Golden Alexander" for Best Feature-Length Film. 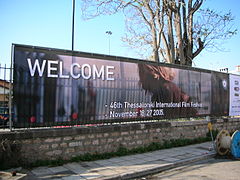 Since 1992, the International Thessaloniki Film Festival has striven to present the most innovative independent films from around the world. Components of the Festival include:

Retrospectives and tributes look at both historic masters, and emerging artists. Since 1993, numerous directors have been represented in the retrospective/tribute programs, including:

In addition to the rich film offerings, the Festival hosts panels, exhibitions, and other artistic events such as:

Over the last five years the Festival has also spotlighted significant, leading directors and promoted the work of emerging young filmmakers from all over the world. 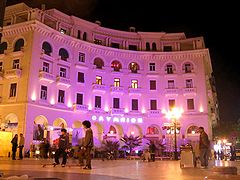 "Olympion" theater, where the head office of the festival is located .

The first period of Thessaloniki Film Festival starts in 1960 and finished in 1991. During these period in festival took part exclusively Greek films. The festival first held in 1960 as a modest "Week of Greek Cinema". From 1965 to 1991 the festival was being named "Festival of Greek Cinema".[1][2] All these years the festival passed various phases. The first years the festival was an important social event with flashy appearances of domestic showbiz stars. During military junta (1967-1974), the censorship made its appearance. In Metapolitefsi the new generation of Greek directors dominated in awards. The festival became more politicized and two opponent groups of spectators were appeared in festival. The conflict of two groups arrived to extremes so that in 1977 the festival split in two different festivals. The split lasted one only year. During 80s festival declined and the change to an international film festival upgraded the festival.[3][4]

In 1992 the festival became an international film festival, acknowledged by the International Federation of Film Producers Associations (FIAPF). The Greek movies competed in a different section of the festival with the name Greek State Film Awards, until 2008. Nowadays Thessaloniki International Film Festival is an annual event focused on the discovery and promotion of new directors from all over the world. For ten days in mid-November, audiences numbering approximately 70,000, as well as hundreds of Greek and foreign Festival guests, attend screenings of more than 150 films in the city's cinemas. 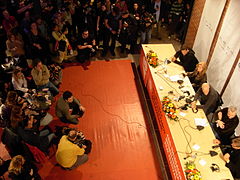 Conference with John Malkovich and current president of the Festival Georges Corraface.