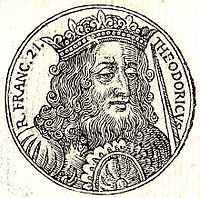 Theuderic IV (c. 712 – 737) or Theuderich, Theoderic, or Theodoric; in French, Thierry was the Merovingian King of the Franks from 721 until his death in 737. He was the son of king Dagobert III; his date of birth is not well known but after 711.

During his reign, his realm was controlled by the mayor of the palace, Charles Martel, who kept him in custody, first in Chelles Abbey, then in Château-Thierry.

After his death, the Frankish throne remained vacant for seven years, until Pepin the Short arranged for Childeric III, the last Merovingian king, to succeed him.