Thibaw Min , also Thebaw or Theebaw (Burmese: သီပေါ‌မင်း, pronounced: [θìbɔ́ mɪ́ɴ]; 1 January 1859 – 19 December 1916) was the last king of the Konbaung Dynasty of Burma (Myanmar) and also the last in Burmese history. His reign ended when Burma was defeated by the forces of the British Empire in the Third Anglo-Burmese War, on 29 November 1885, prior to its official annexation on 1 January 1886.[1] 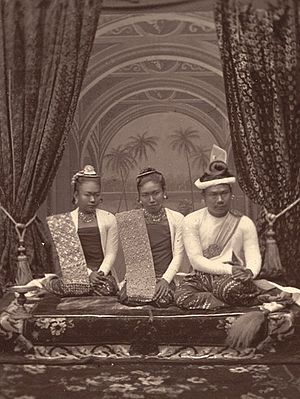 Prince Thibaw was born Maung Pu (မောင်ပု), the son of King Mindon and one of his consorts, Prabha Devi, princess of Laungshe. Thibaw's mother had been banished from the palace court by Mindon and spent her final years as a thilashin, a kind of female Burmese Buddhist renunciant. During the early years of his life, Thibaw studied Buddhist texts at a kyaung to win his father's favor. He passed the Pahtamabyan religious examinations and gained respect and recognition from his father and the chief queen.

One of Mindon's chief consorts, the Queen of the Middle Palace, Hsinbyumashin, helped to broker a marriage between her second daughter, Supayalat and Thibaw, who were half-siblings by blood.

In 1878, Thibaw succeeded his father in a bloody succession massacre. Hsinbyumashin, one of Mindon's queens, had grown dominant at the Mandalay court during Mindon's final days. Under the guise that Mindon wanted to bid his children (other princes and princesses) farewell, Hsinbyumashin had all royals of close age (who could potentially be heir to the throne) mercilessly slaughtered by edict, to ensure that Thibaw and her daughter Supayalat would assume the throne.

At the time of his accession, Lower Burma, half of the kingdom's former territory, had been under British occupation for thirty years and it was no secret that the King intended to regain this territory. Relations had soured during the early 1880s when the King was perceived as having made moves to align his country with the French more closely. Relations deteriorated further in an incident later called "The Great Shoe Question", where visiting British dignitaries refused to remove their shoes before entering the royal palace and were subsequently banished.

At the time, the kingdom's treasury reserves had diminished, forcing the government to increase taxation on kingdom's peasants. In 1878, the national lottery was also introduced on a trial basis, which became popular but soon went awry, with many families losing their livelihoods.[2] The lottery experiment was ended in 1880.[2]

In October to November 1878, a meeting at Mandalay Palace's North Garden significantly expanded the size of the Hluttaw from 4 departments to 14:

A proclamation issued by the court of King Thibaw in 1885 which called on his countrymen to liberate Lower Burma was used by the British as pretext that he was a tyrant who reneged on his treaties and they decided to complete the conquest they had started in 1824. The invasion force which consisted of 11,000 men, a fleet of flat-bottomed boats and elephant batteries, was led by General Harry Prendergast. 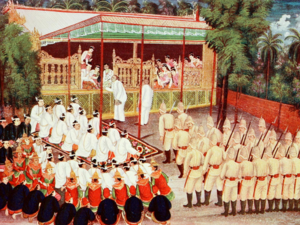 A painting by court painter Saya Chone depicting the abdication of King Thibaw.

British troops quickly reached the royal capital of Mandalay with little opposition. Within twenty four hours, the troops had marched to the Mandalay Palace, to demand the unconditional surrender of Thibaw and his kingdom within twenty four hours.[4] At the time, the king and queen had retired to a summer house in the palace gardens.

File:Thibaw and Supayalat leave Mandalay.jpg
A tapestry of Thibaw and the royal family leaving Mandalay.

The following morning, King Thibaw was forced on a bullock cart, along with his family, and proceeded to a steamer on the Irrawaddy River, in the presence of a huge crowd of subjects.[4]

According to some accounts, Thibaw begged for his life to be saved before being exiled:[4]

Here a guard of British soldiers was drawn up: they presented arms on the appearance of the royal prisoners. As their bayonets flashed in the sunlight, the king fell on his knees in abject terror. "They will kill me," he cried wildly. "Save my life." His queen was braver. She strode on erect—her little child clinging to her dress—fierce and dauntless to the last. So the king and queen of Burma were exiled." 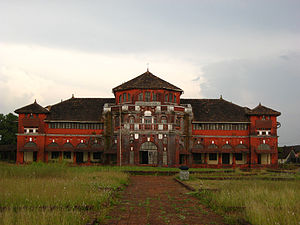 Thibaw and his family were exiled to a brick residence, known as Thibaw's Palace, in Ratnagiri, India.

After abdicating the throne, Thibaw, his wife Supayalat and two infant daughters were exiled to Ratnagiri, India, a port city off the Arabian Sea. During their first five years in India, Thibaw's family lived at Sir James Outram's bungalow in Dharangaon, inland from Ratanagiri, while an official residence was being built.[5] The family then moved into a two storey brick building, colloquially "Thibaw's Palace," built of laterite and lava rock, on a 20 acres (0.081 km2) property.[5]

For his first five years at Ratanagiri, Thibaw received a monthly government pension of 100,000 rupees ($30,000).[5] In subsequent years, his pension was halved; at his death, his pension was 25,000 rupees.[5] He was reportedly reclusive and did not leave the property during his time in Ratanagiri, although Thibaw financed and sponsored local festivals, particularly during Diwali.[5] He died on 15 December 1916, aged 57, and was buried at a small walled plot adjacent to a Christian cemetery, along with one of his consorts, Hteiksu Phaya Galay.[5]

After the death of the King in 1916, some of his family remained in exile while others attempted to return to their homeland. Hteiksu Myat Phayagyi, Thibaw's eldest daughter, had apparently eloped with her driver remained in India and her surviving descendants were contacted by The Hindustan Times in 1995. A portion of that article is repeated below.

The collector's records say that when Phaya died, she was such a destitute that the locals of the village around collected money under the leadership of the collectorate for her funeral. Phaya left behind the daughter she had borne to Gopal, who had died earlier. This daughter, named Tu Tu, was brought up in poverty and not being educated, forgot all about her royal heritage except having one sorry looking poster painting of her mother in her home for veneration among the many household gods...Without money or education, Tu Tu married a local mechanic and had at least six or seven children, all of whom became more and more Indian in religion and culture as well as appearance. Tu Tu, for whom Burmese is a forgotten language, still lives in Ratnagiri as an old woman and speaks fluent Marathi with a rural Maharashtrian accent. She used to sell paper flowers to make a little money for her family in the days gone by.

The fate of the youngest daughter, Myat Phaya, was not so sad. She was born at Ratnagiri in 1887 and in 1919 was able to return to Burma, where she married U Naing, a former monk in 1921. She died at Moulmein on 3 March 1936 having had issue four sons and two daughters. Her eldest son was assassinated in Burma in 1948 during the period leading up to independence while her second son Taw Phaya (b. 1924) survives to this day in Burma.[7][8]

In December 2012, the president of Burma Thein Sein paid homage at the run-down tomb of the King in the western Indian coastal city of Ratnagiri and met the late monarch’s descendants. He was the first head of Burmese government to visit the grave.[9]