From Infogalactic: the planetary knowledge core
Jump to: navigation, search
For other uses, see Thistle (disambiguation). 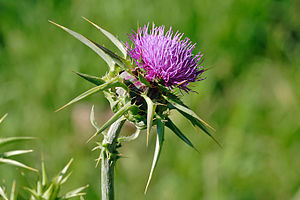 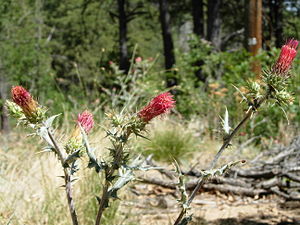 Cirsium arizonicum, showing arachnoid cobwebbiness on stems and leaves, with ants attending aphids that might be taking advantage of the shelter.

Thistle is the common name of a group of flowering plants characterized by leaves with sharp prickles on the margins, mostly in the family Asteraceae. Prickles often occur all over the plant – on surfaces such as those of the stem and flat parts of leaves. These are an adaptation that protects the plant against herbivorous animals, discouraging them from feeding on the plant. Typically, an involucre with a clasping shape of a cup or urn subtends each of a thistle's flowerheads.

The term thistle is sometimes taken to mean exactly those plants in the tribe Cynareae (synonym: Cardueae),[1] especially the genera Carduus, Cirsium, and Onopordum.[2] However, plants outside this tribe are sometimes called thistles, and if this is done thistles would form a polyphyletic group.

Thistle is the floral emblem of Scotland, as well as the emblem of the Encyclopaedia Britannica. 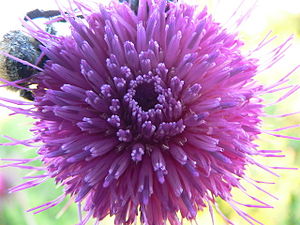 Carduus nutans in the early morning light.
File:Thistledown 1781.JPG
Thistledown, a method of seed dispersal by wind. The tiny seeds are a favorite of goldfinches and some other small birds.

Genera in the Asteraceae with the word thistle often used in their common names include:

Plants in families other than Asteraceae which are sometimes called thistle include:

Thistles, even if one restricts the term to members of the Asteraceae, are too varied a group for generalisation; many are troublesome weeds, including some invasive species of Cirsium, Carduus, Silybum and Onopordum.[3] Typical adverse effects are competition with crops and interference with grazing in pastures, where dense growths of spiny vegetation suppress forage plants and repel grazing animals from eating either the thistle plants or neighboring forage. Some species, although not intensely poisonous, do affect the health of animals that swallow more than small amounts of the material.[4][5]

Conversely however, the genus Cynara includes commercially important species of artichoke and some species regarded as major weeds are commercial sources of vegetable rennet used in commercial cheese making.[6] Similarly, some species of Silybum that occur as weeds, also are cultivated for seeds that yield vegetable oil and pharmaceutical compounds such as Silibinin.[7][8][9]

Other thistles that nominally are weeds are important honey plants, both as bee fodder in general, and as sources of luxury monofloral honey products.[3][10][11] 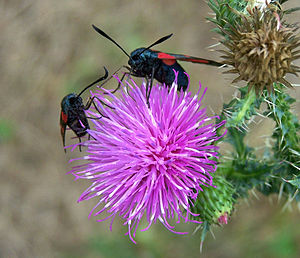 Some thistles (for example Cirsium vulgare, native to Eurasia), have been widely introduced outside their native range.[13] Control measures include Trichosirocalus weevils, but a problem with this approach, at least in North America, is that the introduced weevils may affect native thistles at least as much as the desired targets.[14] 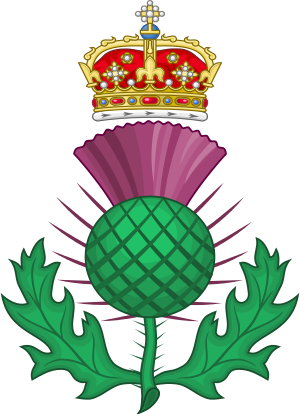 Scottish thistle as a Heraldic badge.

In the language of flowers, the thistle (like the burr) is an ancient Celtic symbol of nobility of character as well as of birth, for the wounding or provocation of a thistle yields punishment.[citation needed]

The thistle has been the national emblem of Scotland since the reign of Alexander III (1249–1286) and was used on silver coins issued by James III in 1470. It is the symbol of the Order of the Thistle, a high chivalric order of Scotland. It is found in many Scottish symbols and as the name of several Scottish football clubs. The thistle, crowned with the Scottish crown, was the symbol of seven of the eight former Scottish Police Services (from which a new national Police Service was formed in 2013), the sole exception being the former Northern Constabulary. The thistle is also the emblem of Encyclopædia Britannica, which originated in Edinburgh, Scotland.

It is also used to symbolize connection with Scotland overseas. For example, in Canada, it is one of the four floral emblems on the flag of Montreal; in the US, Carnegie Mellon University features the thistle in its crest in honor of the Scottish heritage of its founder, Andrew Carnegie.

Origin as a symbol of Scotland

According to a legend, an invading Norse army was attempting to sneak up at night upon a Scottish army's encampment. During this operation one barefoot Norseman had the misfortune to step upon a thistle, causing him to cry out in pain, thus alerting Scots to the presence of the Norse invaders. Some sources suggest the specific occasion was the Battle of Largs, which marked the beginning of the departure of King Haakon IV (Haakon the Elder) of Norway who, having control of the Northern Isles and Hebrides, had harried the coast of the Kingdom of Scotland for some years.[15] Which species of thistle is referred to in the original legend is disputed. Popular modern usage favours cotton thistle (Onopordum acanthium), perhaps because of its more imposing appearance, though it is unlikely to have occurred in Scotland in mediaeval times; the spear thistle (Cirsium vulgare), an abundant native species in Scotland, is a more likely candidate.[16][17] Other species, including dwarf thistle (Cirsium acaule), musk thistle (Carduus nutans), and melancholy thistle (Cirsium heterophyllum) have also been suggested.[18]

Carduus is the Latin term for a thistle (hence cardoon, chardon in French), and Cardonnacum is the Latin word for a place with thistles. This is believed to be the origin of name of the Burgundy village of Chardonnay, Saône-et-Loire, which in turn is thought to be the home of the famous Chardonnay grape variety.

Maud Grieve recorded that Pliny and medieval writers had thought it could return hair to bald heads and that in the early modern period it had been believed to be a remedy for headaches, plague, canker sores, vertigo, and jaundice.[19]