Thomas Augustine Arne (/ɑːrn/; 12 March 1710, London – 5 March 1778, London) was an English composer, best known for the patriotic song Rule, Britannia!. He also wrote a version of God Save the King, which became the British national anthem, and the song A-Hunting We Will Go. Arne was the leading British theatre composer of the 18th century, working at Drury Lane and Covent Garden.

His father and grandfather were both upholsterers and both became officials of the City Company of Upholsterers. His grandfather fell upon hard times and died in the debtors' prison of Marshalsea. Arne's father earned enough money not only to rent 31 King Street, a large house in Covent Garden,[1] but also to have Arne educated at Eton College. In later life, he too lost most of his wealth and had to supplement his income by acting as a numberer of the boxes (ticket counter) at Drury Lane Theatre.

Arne was so keen on music that he smuggled a spinet into his room and, damping the sounds with his handkerchief, would secretly practise during the night while the rest of the family slept. He also dressed up as a liveryman in order to gain access to the gallery of the Italian Opera. It was at the opera that Arne first met the musician and composer Michael Festing, who was a major influence on him. Festing not only taught him to play the violin, but also took him to various musical events, including going to compete against Thomas Roseingrave for the post of organist at Hanover Square, and a visit to Oxford in 1733 to hear George Frideric Handel's oratorio Athalia.

Upon leaving school, Arne was articled to a solicitor for three years. However, Arne's father discovered his son leading a group of musicians at what was probably one of Festing's musical gatherings. Following this disclosure of his son's real interest and talent, he was persuaded (again probably by Festing) to allow the young Arne to give up his legal career and to pursue music as a living. 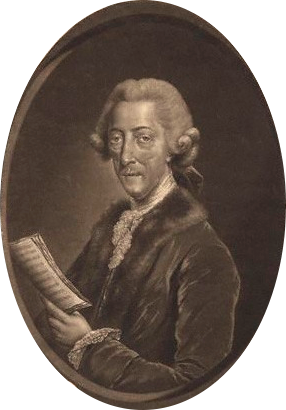 Between 1733 and 1776, Arne wrote music for about 90 stage works, including plays, masques, pantomimes, and opera. Many of his dramatic scores are now lost, probably in the disastrous fire at Covent Garden in 1808.[2] Arne's sister, Susannah Maria Arne, was a famous contralto, who performed in some of his works, including his first opera, Rosamund. (She would later become known professionally as "Mrs Cibber".) With their brother Richard, they would often perform Arne's works together.

Arne was a Freemason[3] and active in the organisation, which has long been centred in the Covent Garden area of London, where Arne lived for many years.

Arne's Catholicism meant that he never composed music for the Church of England, unlike most other leading English composers of his time.[4]

On 15 March 1737,[5] Arne married singer Cecilia Young, whose sister, Isabella was the wife of John Frederick Lampe. During this period Arne's operas and masques became increasingly popular, and he received the patronage of Frederick, Prince of Wales, at whose country home, Cliveden, the Masque of Alfred, featuring "Rule Britannia", was debuted in 1740.

In 1741, Arne filed a complaint in Chancery pertaining to a breach of musical copyright and claimed that some of his theatrical songs had been printed and sold by Henry Roberts and John Johnson, the London booksellers and music distributors. The matter was settled out of court. Arne was certainly one of the very first composers to have appealed to the law over copyright issues.[6]

In 1750, after an argument with David Garrick, Susannah left Drury Lane for Covent Garden Theatre, and Arne followed. In 1755 during a period spent in Dublin, he separated from Cecilia, who, he alleged, was mentally ill. He began a relationship with one of his pupils, Charlotte Brent, a soprano and former child prodigy. Brent performed in several of Arne's works, including the role of Sally in his 1760 opera Thomas and Sally and Mandane in his 1762 opera Artaxerxes. Eventually Brent and Arne went their separate ways and she married a violinist named Thomas Pinto in 1766.

During the 1760s Arne frequently collaborated with the Irish writer Isaac Bickerstaffe. Thomas and Sally was the first English comic opera to be sung throughout (it contained no dialogue).[2] Artaxerxes was one of the most successful and influential English operas of the 18th century and is the only known attempt to write an Italianate, Metastasian opera seria, in the English language.[7] It was frequently performed in London into the 1830s and it was the most popular full-length English opera before the 20th century.[8][9] In a 1791 visit to London, Joseph Haydn was impressed by a performance of Artaxerxes he attended and admitted that he had no idea such an opera existed in the English language.[10]

In 1769 Arne composed the song Soft Flowing Avon, with lyrics by Garrick, for the Shakespeare Jubilee held by Garrick in Stratford-upon-Avon to commemorate the life of William Shakespeare.

In 1777, shortly before his death, Arne and his wife were reconciled. They had one son, Michael Arne who was also a composer. Arne is buried at St Paul's, Covent Garden, London. A blue plaque, unveiled in 1988, commemorates Arne at 31 King Street in Covent Garden.[11][12]